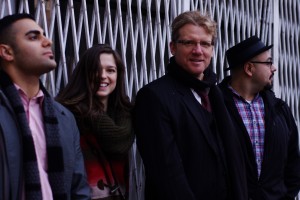 When the patron arrives at 236 East Pender, a barren storefront just off Main Street, he soon realizes that would-be performers for WALKING PROJECTS will outnumber would-be consumers—and that’s fine.

Publicity materials have taken pains to point out one of the co-creators is officially a member of the N’laka’pamux/Secwepemc First Nations and the other is a white guy. There is no admission procedure, no tickets. It’s seat-of-the-pants management. Two women show up accidentally and they are welcomed as participants—and that’s fine.

The headquarters for Unit/Pitt Projects is not a theatre; it is the departure point for about a dozen walking tours of the city designed by McIntosh and Bose. Each tour will be guided by a local actor who will recite a brief narrative, written by either McIntosh or Bose, for the particular locale to which the patron has been escorted.

Our first escort/actor, Chu-Lynne, leads the patron to a bus stop. It takes about twenty minutes to reach the destination, on Fraser Street, across from Glad Tidings Temple. Along the way we get to know Chu-Lynne, a recent graduate of SFU’s theatre program. She was born in Hong Kong. Her mother approves of her attempts to forge a career in the arts but her father seriously wants her to repay him for her room and board while she completing high school. Chu-Lynne paid her own way through university. Now she works at Covenant House, often doing grueling all-night shifts, supervising street kids who are trying to find a pathway into our highly competitive society.

The patron soon recognizes the East Vancouver avenue on which they are walking has a plethora of Vancouver Specials. The patron already knows a good deal about the basement-less houses known as Vancouver Specials, mostly built in the 1970s, so it becomes an exercise in polite patience to hear Chu-Lynne dutifully recite the snatches of David McIntosh’s narrative that references immigration and Vancouver Specials.

The patron takes Chu-Lynne for a latte on Main; her small reward for bravely making the most of the hour.

The patron is escorted for a second walk by Pedro whose parents are from Guatemala. He has also graduated from the SFU theatre program. Like Chu-Lynne, Pedro is earnest and bright. Like Chu-Lynne, he wants to create original work. He and his male partner have their own theatre company, Rice & Beans Theatre, reflecting their racial backgrounds. Born in Canada, Pedro grew up in tiny Chetwynd, the only “spic” in his school. Now, for his day job, Pedro drives a delivery truck.

There is no bus ride. Pedro leads the patron south, to Station Street, where the patron points to the former location of the Station Street Arts Centre. The actor has never heard of it. This narrative, by Bose, consists of snippets of dialogue recalling encounters in the American and Ivanhoe bars. We’re in that block where Atlantic Scrap Metals used to be. Possibly this foray into the Ivanhoe Hotel is meant to be eye-opening. The patron has been drinking in the Ivanhoe pub well before Pedro was born. In fact, the patron’s father drank there, too. So Bose’s narrative, more taut than McIntosh’s meandering text, borders on commonplace.

The patron buys Pedro a pint in the Ivanhoe, his small reward for bravely making the most of forty minutes.

To say the two scripts were slight would be generous. They’re just enough to satisfy the parameters of a concept that was sufficiently intriguing to garner support from City of Vancouver, BC Arts Council, Canada Council and the Koerner Foundation, but there are literally hundreds of books that can provide a deeper appreciation and understanding of Vancouver than WALKING PROJECTS. Michael Turner’s Kingsway is much more successful at evoking originality of place. D.M. Fraser. Betty Lambert. Chuck Davis. Bruce Macdonald. Bill New. Evelyn Lau. Exploring Vancouver by Harold Kalman, Ron Phillips and Robin Ward.

But that’s fine. All’s well that ends well. If McIntosh and Bose hadn’t had the gumption to put on their experimental program, the patron would never have met Chu-Lynne and Pedro—both of whom are living in the east end of the city, in the same age group. Both of whom are not thinking Hollywood; they are thinking Cultch. Neither are cynical or bitter. If they can’t support themselves with professional acting gigs in Canada’s most expensive city, they will continue to feed off dreams.

With a finite number of professional theatres, will the ever-increasing number of Chu-Lynnes and Pedros be forced to trade upon their ethnicity in order to be afforded even a sliver of opportunity? Is the ability to concoct a viable grant proposal becoming more integral to theatrical success than talent?

The words of Chu-Lynne and Pedro have comprised 95% of the dialogue from 3 p.m. until 5 p.m. Ultimately, their one-on-one companionship for one cold afternoon has been as fortifying and enlightening as most nights at the theatre.