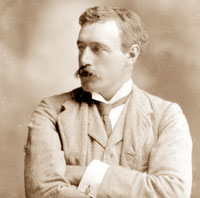 The highest hill on Saturna Island is named after the B.C. author who was nicknamed ‘Crazy Pike’ and who committed Byron-like suicide in the sea, having stabbed himself with a pen knife, in 1915. On Saturna Island, Warburton Pike owned and operated a sand quarry at Taylor Point and a sheep ranch with 600 sheep. He also owned property on Mayne Island and in Oak Bay, Victoria. In 1912 he also bought the southern half of Discovery Island, south of Victoria, where he built a house. St. Mary Magdalene Church on Mayne Island is on land donated by Warburton Pike. Once provisional director of the newly incorporated Cassiar Central Railway, he became hopelessly mired in debt towards the end of his days after some brief success with a small gold placer operation near Dease Lake in the Cassiar region.

Sometimes known as ‘Crazy Pike’, he explored northern and south-eastern B.C., he frequently went big game hunting with President Teddy Roosevelt and he was granted membership in the Royal Geographical Society of London. He returned to London, intending to enlist in World War I, but was rejected due to his age and poor health. Dejected, he committed suicide after his sister had committed him to a seaside sanitarium at Bournemouth in 1915. He body was washed up on the beach. Mount Warburton Pike on a map.

It has been speculated that erratic behaviour of Warburton Pike and his solitary lifestyle was due to his contraction of syphilis as a young man after dropping out of Oxford and prowling London’s West End with his older brother Marmaduke. The six Pike siblings had inherited considerable money upon reaching age 21 after their father, a member of a Dorset clay-mining family, had died rich at age 55 in 1869. Warburton Pike was the youngest son, born in Wareham, Dorset, on September 25, 1861. His mother Mary Mayer (1827–1866) died when he was age five.

Prior to his arrival in B.C. in 1884, Warburton Pike had attended Rugby School and Brasenose College Oxford University, visited Iceland, tried to be a cowpoke in Wyoming and had a stint as a miner in California. There’s a concrete & brass cairn in his honour at the north end of Dease Lake, in the Cassiar district of B.C., marking one of his few successes. At Porter Landing, this cairn has been inscribed: “In Memory of Warburton Pike, Author, Sportsman, Explorer, Born – Sept.25, 1861, Died – Oct. 20, 1915”. His modest gravesite can be found the public cemetery in Bournemouth, England, where he killed himself. Pike’s Portage, between Great Slave Lake and Artillery Lake in Northwest Territories, is also named after him. Warburton Pike is on the left.

His books were The Barren Ground of Northern Canada (London: Macmillan, 1892) and Through the Subarctic Forest (London: Edward Arnold, 1896). Both were reprinted by Arno Press of New York in 1967.