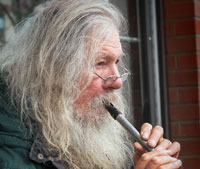 Long the literary hub of the province’s “hub city” of Nanaimo, Thora & Jerry Howell’s The Bookstore on Bastion Street fostered the careers of dozens of local writers, few closer to Thora Howell’s heart and spirit than B.C.’s most-loved street poet Tim Lander. “Poetry is a strange art,” Lander once write. “It is a performing art without a performance space.” The erudite but peculiar Lander has performed with his penny whistle and piccolo at countless outdoor locations in B.C. for decades. He read indoors on several occasions at the Bookstore on Bastion Street which Thora Howell operated as an unofficial community centre for Nanaimo from July, 1978 to November, 1999.

“Those readings were always great fun,” Thora Howell recalls. “His poetry is in great contrast to his outward appearance. People love his readings for the humour and for the truths he tells. He articulates so well–probably an outcome of his public schooling in Britain–and he has a gift for playing with language. Whether he is writing satire or telling it like it is, his audience always gets it. Often when I was in Vancouver, I found him outside the library on Burrard, selling his poems for a looney.”

Howell is particularly fond of Landers’ A Book of Prejudices, a collection of poems about subjects that all start with the letter P–inclding 59 works about politicians, poets, and prostitutes, etc. have an esthetic approach to poetry

Breakers of the wild horses
of the adolescent imagination

In 2015, Lander had a rare ‘official’ reading at the Harbourfront Library in Nanaimo after a retired doctor named John Whitelaw noticed Tim playing his penny whistle and asked Thora Howell to show him some of Lander’s self-published books. Whitelaw facilitated the reading and put some of Lander’s poems and their accompanying illustrations onto Power Point for his performance. About sixty people present purchased all the books that Lander had brought. “He probably made more money that night,” says Howell, “than at any other poetry reading he has ever given.”

Nearly all of Lander’s titles, except for one volume of popetry from Ekstasis Editions, have been hand-written texts that Lander has photocopied and hand-sewn. Lander’s chapbooks sometimes carry the message, “Do not reproduce without love.” As the publisher of Tim Lander’s ‘Pecunia Non Olet’ (The Poem Factory No. 8), Ed Varney has described the Nanaimo poet as being “like the zen master you meet on the road, exchange a few words with, and only recognize after he is gone.”

Born in February of 1938 in England, Tim Lander attended London University before moving to Canada in 1964. A penny whistle playing ‘street poet’ and busker, he has published numerous chapbooks and a volume of poetry with Ekstasis Editions. Gentle, thoughtful and articulate, he has remained an important presence on the West Coast poetry scene for decades, mostly based in Nanaimo. In the tradition of the itinerant “chapman” who makes and sells his own books, Lander has mostly produced his own publications or “chap-books” by hand, handsewing them with a needle and thread according to demand during his travels.

“I stood playing the flute in the shadows of Notre Dame de Paris and realized that I was just a tiny link in a tradition that reached back a thousand years in that one place,” he wrote in a letter, at age 69. It is impossible not to feel sympathy for Tim Lander when he describes sleeping under the Burrard Bridge and waking to discover his false teeth were stolen.

If you’re passing swiftly, street musician Tim Lander might appear to be a harmless simpleton or a public nuisance, or both, or even a busker who needs a handout or even a bath, but stop and talk to the Yeats-quoting Lander, who operates a boarding house that he owns in Nanaimo, and you’ll quickly realize he’s a gentle and sophisticated wise man who masquerades as an over-grown sprite.

Like a universal character from a Tarot card deck who invites complex interpretations, Lander has lurked and laughed for years on the perimeter of the West Coast poetry scene, a self-publisher who frequently shows up at literary events as the real McCoy, mysteriously enduring beyond the writing departments and the cabals of mutually motivated poseurs.

Or, putting it another way, Lander remains leery of what he calls “the hierarchical filter of the Canada Council system of Approved Editors and Publishers.” Stapling together his own meditations on life, Lander functions like the wandering minstrel of old, dependent upon the curiosity of the general public, not the public purse.

Educated in England, Lander describes himself as a coward, not as a rebel, someone who knows he cannot change the world, but his barnacle-like presence on the literary scene of the Lower Mainland and Vancouver Island has gradually earned him widespread respect.

“I was an aged man,” Lander once wrote in his self-published memoir, The Magic Flute, “a paltry thing, travelling every week with my pack on my back, my hat on my head and my piccolo in my pocket, over on the ferry from Nanaimo, to play around the market and craft shops of Granville Island.”

“At night I would unroll my sleeping bag on a thick, soft growth of ivy under the Burrard Street Bridge, with the ever-present noise of traffic thudding above me. I reckoned that if I made a few dollars, why spend it on a cheap bed? I had no shame in sleeping like a hobo. I’d always secretly admired the ‘gentlemen of the road’ and by nature I’m a penny-pincher.”

Refusing to submit to Nanaimo’s humiliating by-law that requires all buskers to audition in front of a by-law officer to obtain a license, as well as a name tag, Lander increasingly gravitated to Vancouver to play his piccolo and penny whistle. Some youngsters have belittled him as a haggard version of Father Christmas, but far more have called out “Gandalf”—a comparison he enjoys.

Most passers-by have responded kindly. “If you can play me some Jethro Tull,” said one Aboriginal man in a Pink Floyd t-shirt, “I’ll see if I can find you a buck,” to which Lander responded by saying he’s just an old hippy who only plays music off the top of his head. The Jethro Tull fan gave him his take-out box of steak anyway.

Another time a Vancouver cop encouraged Lander to keep playing, even though a noise complaint had been made.

One morning Lander woke under the Burrard Bridge, put his hand in his hat and discovered his false teeth were missing. This happened a few weeks prior to Christmas. He searched desperately in the brambles to no avail. A malicious thief or a wild animal had stolen his ability to make his meagre living because Lander couldn’t play his flute properly without his teeth.

“Then … I realized that this was absolutely the funniest thing that had ever happened to me,” he writes, “and the humour of the whole predicament filled me with light.” The theft proved serendipitous. He found he could play his piccolo even better without teeth. “I could do things with the notes that I never could do before. This was my Zen moment, this was my satori. My flute and I, we had discovered each other like two lovers.”

For decades Lander has conducted an erudite, one-man campaign to assert the validity of the humble chapbook as the purest vehicle for poets, “not dependent on the good will of the government,” although he has just released his second ‘legit’ trade book called Inappropriate Behaviour (Broken Jaw Press $19). Whereas his first collection, The Glass Book (Ekstasis 2000), was a gentle work, Lander describes Inappropriate Behaviour as “a book full of repressed rage” mainly comprised of poetry written before he started busking.

According to Lander, homemade chapbooks have the added advantage of displaying the hand, judgement and design sense of the poet. “Chapbooks can be printed in small quantities,” he explains, “as needed, and they do not require a huge outlay of cash. They are cheap, unadorned, designed to be traded with other poets, and they are affordable to the kind of aficionados of poetry who attend readings, the educated underclass.” Most of Lander’s chapbooks over the years have been deftly illustrated with whimsical, minimalist sketches.

Somewhat alarmed when he realized Inappropriate Behaviour is a potpourri of pieces written between six and thirty years ago, Lander released his umpteenth chapbook, Elegy Ritten in an ORL Nite Café, only available for $5 by mail, via his personal email address. As usual, it contains Lander’s trademark advice to the reader regarding copyright: “Do not reproduce without love.”

Tim Lander’s first commercial publication, The Glass Book (Ekstasis $14.95), is a welcome event, recalling in its poems and design an earlier age when City Lights and New Directions published Ginsberg and Ferlinghetti. Lander is neither as rhetorical or incantatory as Ginsberg nor as witty and urbane as Felinghetti, but he has his own quiet, intimate, celebratory mode, untouched by the need for closure, theatrics or metaphorical complexity.

Despite the casual, whimsical tone, Lander’s poems often throw up surprising constructions, such as “the sea is so greenly proud”, though these oases are too often undermined by abstractions and disconcerting shifts in diction and banal constructions (i.e. “lacking comprehension”).

While his long poems often ramble, Lander’s shorter lyrics—where he celebrates the woodlouse and the earwig, the seasons, lost friends, and the smell of jasmine in the wind—strike a firmer note. I’m thinking of ‘Picture Postcards of Desire’ and ‘I’ll go down to the Sally Ann’, where, in the face of death, the poet confesses “It is impossible to write anything important” beyond acknowledging that “in that ordinary apartment / there suddenly was an absence.”

Naked and scribbling in a café, the poet proposes a trip to the Sally Ann “to pick out another suit of clothes / to mock myself in last year’s fashions.” Lander’s self-mocking stance, including deliberate misspelling, is, in the face of so much political and aesthetic posturing, endearing. 1-896860-62-1. By Gary Geddes.

O Lust How Magnificent Your Artifacts

For prose a well-made book is enough to satisfy us. We do not feel the same twinge of disappointment when we acknowledge that all novelists are not: Margaret Laurences as we do when we read a batch of poets and encounter: nobody even remotely resembling a Henry Vaughan or a T.S. Eliot.

Still, we do keep on reading with: interest poetry that is at least well done, poetry that observes the world and records the feelings of those who inhabit it, for the sense that we are getting a close view, down among the grasses and the mosses, of what life for most people’ really is.’

Such modest poetry is rarely published by major publishers, who find it necessary for their reputation to avoid anything merely tentative. All but one of the 10 volumes I have been reading are published by small presses; the odd one out is avowedly self-published.

The self-publisher among my 10, Tim Lander, set out to engage my attention and did by calling himself “B.C.’s lowest rapscalion of ‘a self-publishing poet,” the implication being that self-publishing poets never get noticed. What he doesn’t seem to realize is that most of the small presses that get noticed are in fact poets publishing, themselves and their friends.

His O Lust How Magnificent Your Artifacts (Lander, 217 Irwin St. Nanaimo, B.C. V9R 4X4), is a series of meditations on the role of eroticism in art and civilization, both curious and polished. Despite his eagerness to be read, Lander has not supplied a price for his book.