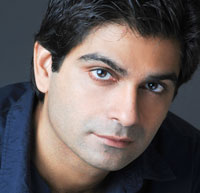 Having grown up near Kamhathipura, Bombay’s red-light district, Anosh Irani was intrigued by the prostitutes, pimps, cops and transgenders. The theatricality of the flesh market made him stare in wonder, leading him to write his first full-length play. The Matka King, that was workshopped at the Arts Club, where it premiered in 2003, directed by Bill Millerd. Irani’s The Matka King is a darkly comic tale about a witty and powerful eunuch who operates a brothel and keeps his severed penis in a jar. Its also one of six plays included in The Arts Club Anthology (Playwrights 2015), edited by Rachel Ditor, to mark the 50th anniversary of the largest theatre in Western Canada.

[Led by Bill Millerd since 1973, the Arts Club of Vancouver has produced more than 100 original plays. The first homegrown box office success was Sherman Snukal’s Talking Dirty in 1981-82. Spearheaded by Yvonne Firkins and Otto Lowy, the Arts Club was founded in 1958 as a private club for artists, musicians, actors and writers (including novelist Jane Rule). On the second floor of a converted gospel hall at 1181 Seymour Street, the Arts Club first produced Moss Hart’s Light Up the Sky in 1964 (the same year Jane Rule’s Desert of the Heart was published in England). The 650-seat Granville Island main stage on Granville Island was added in 1979; the 225-seat Arts Club Revue Theatre nearby opened in 1983; the refurbished Stanley Theater at 12th and Granville re-opened as an Arts Club venue in 1998 after being closed since 1991. The original Seymour building was demolished in the 1990s. 978-1-77091-218-2] Born in Bombay, Irosh Irani was raised as a Zoroastrian. As an only child in a Parsi colony, separated from both Hindus and Muslims, he used to tell stories to his pet cockatoo, Polly. Having worked as a dancer and advertising copy editor, Irani moved to Vancouver with several friends in 1998. After attending Capilano College, he read unsolicited scripts for Arts Club Artistic Director Bill Millerd, who became his playwriting mentor. At age 29, while Irani was enrolled in UBC’s Creative Writing program, he became a Canadian citizen. “I had always heard of an American dream,” he wrote in the Globe & Mail. “The one that Canada offers is better.”

Five months after premiere of The Matka King, Irani published his debut novel, The Cripple and His Talismans (Raincoast $29.95), in which a detestable and unnamed narrator goes searching for his severed limb after he has awakened in a Bombay hospital to discover his left arm is inexplicably missing. He proceeds to carry a leper’s finger through a dizzying, absurdist and deeply commercial world of lepers and cockroaches, peacocks and prostitution, rainbows inside whiskey bottles and chickens that practice black magic. “The novel’s restless vision of Bombay,” commented one dazed but impressed reviewer, “occasionally feels like a motorcycle tour of the Louvre.”

In Anosh Irani’s second novel about a nightmarish quest, The Song of Kahunsha (Doubleday $29.95), a ten-year-old boy runs away from an orphanage, hoping to find his father. While dreaming of an idyllic paradise he calls Kahunsha, “the city of no sadness,” this young seeker named Chamdi befriends a brother and sister who are beggars. Amid Bombay’s 1993 religious riots, in which 2,000 people were killed, their plan to rob a Hindi temple literally explodes in their faces. “One day, all sadness will die,” Chamdi whispers to Guddi, “and Kahunsha will be born.” Before that can happen, Guddi’s brother will die in street violence, Chamdi will have to outwit a deadly crime boss to save Guddi’s life, and the crime boss will order Chamdi to cut out his own tongue.

As Irani once told Georgia Straight threatre critic Colin Thomas, “If we are lucky enough to live in a place like Vancouver, we sometimes forget that there are people who are living in hell.” With The Song of Kahunsha, Irani has once more invented a spiritually wounded protagonist who carries a talisman—only this time it’s the blood-stained cloth that swaddled him as a baby. The Song of Kahunsha is another literally fabulous tale about finding God; a fable about self-completion that evokes the precious need for love in a labyrinth of sorrow and cruelty. Far from bleak, this Oliver Twist Goes To India culminates in tenderness and hope. About the only thing to criticize is the packaging that has inflated a 200-page story to 300 pages.

Featuring Anita Majumdar as the dancer Apsara, Inosh Irani’s Bombay Black charts the seduction of Apsara by a mysterious blind man named Kamal. It received the Dora Mavor Moore Award for Outstanding New Play in 2006. Bombay Black and The Matka King are contained in The Bombay Plays (Playwrights Canada 2007), shortlisted for the Governor General’s Award. “I think he’s one of Canada’s most promising writers,” remarked Arts Club Artistic Director Bill Millerd, when Bombay Black came to his mainstage in February and March of 2008.

Born a boy, but a eunuch by choice, Bombay sex worker Madhu, at 40, can no longer support herself as a transgender prostitute in the red-light district of Kamathipura. Since her teens she has managed to survive as a hijara—a person belonging to the third, middle sex—and now she must adapt to life as a beggar in Anosh Irani’s fourth novel, The Parcel (Knopf $32). Her past comes back to haunt her when the most-feared brothel owner, Padam Madam, wants Madhu to charge of a new arrival from the provinces, a ‘girl’ who has been betrayed and trafficked by her aunt. This ‘parcel’ is to be trained by Madhu evokes feelings of tenderness in Madhu that have been long suppressed.