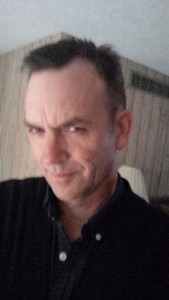 As described in Michael Turner‘s third book, Kingsway, here the Gladstone Inn was erected shortly after the Royal Engineers widened the First Nations foot path and subsistence trail now known as Kingsway in the mid-1860s. As an art critic and historian, Turner views this seemingly inauspicious location as the site of “the first post-European ‘contact’ structure” to be erected along the vital Kingsway thoroughfare connecting New Westminster and Vancouver. In 2015, the site was shared by Apollo Muffler and an ANAVets Legion, but it was many things before that. In 1937, it was a jazz joint called the Hi-Hat Cabaret. For more info, Turner recommends Major Matthews’ Mount Pleasant Early Days: Memories of Rueben Hamilton Pioneer 1890, City Archives, City Hall, Vancouver (1957).

Born in North Vancouver in 1962, Michael Turner co-founded the band Hard Rock Miners in 1987. Prior to his emergence as a writer, arts curator and critic, he was initially known primarily as a musician and an organizer of readings and events at the Malcolm Lowry Lounge in Burnaby, and at the Railway Club in Vancouver.

Having spent some summers working in a fish cannery on the Skeena River as a teenager, Turner first published a collection of poems, Company Town, that was shortlisted for the Dorothy Livesay Poetry Prize. Turner won a 1996 Genie for “Who The Hell Do You Think You Are?”, the song in the film Hard Core Logo based on his book of the same name. Hard Core Logo was a memoir/documentary fiction about a touring punk rock band.

His third book, Kingsway (1995), is a suite of poems about Vancouver’s oldest thoroughfare, a diagonal and commercially varied street that passes through changing neighborhoods. Turner’s single stanza poems approximate the city blocks as tributes to the mostly working class history of the strip. A 20th anniversay edition includes a new essay and photos by the author.

Kingsway was followed by an amalgam of genres in the form of a screenplay, American Whiskey Bar, that became a live TV experiment by Moses Znaimer and Bruce McDonald. It was re-released in 2004 with a foreword by William Gibson.

Turner received the 1999 Ethel Wilson Prize for Fiction for The Pornographer’s Poem, an audacious work about a young filmmaker who falls prey to greed, delusion and hypocrisy. Turner has also co-written two screenplays with artist Stan Douglas for DV installation/TV broadcast, a screenplay with filmmaker Bruce LaBruce about the life of photographer Wilhelm Von Gloeden and a libretto commissioned by the Modern Baroque Opera Company based on Wilhelm Busch’s Max & Mortiz. The SFU English Department invited Turner to be its first Writer-in-Residence from September 2009 to May 2010.

He lives in Vancouver where he founded Advance Editions in 1998, in conjunction with Arsenal Pulp Press. Advance Editions produced four titles between 1999 and 2002: Wayde Compton’s 49th Parallel Psalm, Neil Wedman’s Burlesck, Marina Roy’s SIgn After the X and Nathalie Stephens’s somewhere running. The last book in the series was to be Stan Douglas’s Every Building on 100 Block West Hastings but Arsenal ended the partnership and took over the project that Turner initiated. He subsequently provided the introductory essay for Fred Herzog: Vancouver Photographs (D&M 2007). [See below]

Music groups have concept albums, so why not a concept novel? Michael Turner’s 8 X 10 (Doubleday) doesn’t refer only to the standard size of a glossy, promotional photo. It’s about the lives of eight people told over ten events. “No one is known by their names,” he writes, “or their ethnicity but by their relationships to each other… and by their occupations.” The year and the places are also unrevealed. Namelessness and timelessness, in theory, reflect today’s uncertainty and indecision, war and migration, love and loss. Michael Turner’s The Pornographer’s Poem (Doubleday $32.95) is about a filmmaker who, at 16, captures his neighbours having sex on Super-8. Between exploration and exploitation, the unnamed narrator comments on what he finds painful and confusing. In the films he comes to make, he portrays those who are disadvantaged in their day-to-day lives in positions of dominance, sexually belittling those who have once held them down. Nettie, an idealistic poet and the one person with whom the narrator genuinely connects, sees in pornography the opportunity to do something artistic, liberating and socially relevant. Despite his radical intentions, the narrator falls into a world of greed, delusion and hypocrisy, the same world he had once rebelled against. Pornographer’s Poem is interspersed with dialogue between the narrator and an unknown voice of authority. Turner’s previous titles include American Whiskey Bar and Hard Core Logo. 0-385-25845-3

Monika Herendy, a celebrated Hungarian pornographer, is looking to make her debut into the world of “legitimate” film in Michael Turner’s American Whiskey Bar (Arsenal $15.95), a “faux memoir” about the unmaking of a film that incorporates the intense conversations of people seated at four different tables in a bar. Turner’s resulting screenplay/novel is several books in one: a satire of the film industry and a story of sex, violence, lies, ambition, power, racism, dreams and regret.
1 55152 048 6

LOCAL WRITER / MUSICIAN / HYPESTER Michael Turner has taken enough time away from organizing his popular reading series at Vancouver’s Railway Cub to produce his second book, Hard Core Logo (Pulp $12.95). Hard Core Logo’s semi-autobiographical conversations, letters, interviews, and journal entries provide glimpses of a punk rock band reunited for one final show and their subsequent impromptu tour of Western Canada. The book, says Turner, “attempts to demystify the romance of being in a band”. It loosely coincides with Turner’s professional musical life from the early 1980s to the present with the folk-rock group Hard Rock Miners, which released its first major album two years ago on the Sony label. His first book, Company Town, about his experiences working in a fish cannery on the Skeena River, was short listed for a B.C. Book Prize for poetry. Turner’s monthly series of readings, entitled ‘Reading Railroad’ (complete with the familiar locomotive logo from Monopoly) has redefined poetry readings. The success is due largely to Turner’s relentless enthusiasm, the same perpetual energy which led to him being named one of ‘Vancouver’s 100 most creative people’ by Step magazine.
Barely into his 30s, Turner feels lucky to be alive. Five years ago he was found to have cancer. He had two operations and four treatments of chemotherapy. Turner was nursed back to health by Ingrid Percy, his mate of six years and his main partner in Hard Rock Miners. At the end of it all I realized there was really no end,” he says. “1 would forever be a cancer patient and therefore would have to come to terms with a lot of things I normally took for granted.” 0-88978-265-2 With 80,000 images of Vancouver taken during the past half-century, Fred Herzog is the city’s premier street photographer, having focussed on store fronts, cafes, barber shops, pedestrians, cars, signs since his emigration from Germany in 1952. “It was my goal from the start to show city vitality,” he says. His mostly colour images suggest Vancouver was a more vibrant and unself-conscious city in Fifties and Sixties when it was bustling burg in which the working class could still afford to live.

Replete with vacant lots, abandoned cars and bygone signage, his images invite the adjective authentic, but his own website puts it best. “The images are not about important people, events or edifices, but about the vitality of the city, its ambience, and the daily activities of the people. Also their dress, automobiles and recreation, and the pride with which they participate and enjoy human contact.”

Herzog came to Vancouver in 1953 and worked on ships for three years before making his living primarily as a medical photographer. “My present style of street photography was formed in spring 1957 with a bang,” he says, “practically complete from day one.” He sold his first print in 1970. Since then he has prodigiously thrived in relative obscurity before finally hitting it big.

Now officially represented by the Equinox Gallery, Herzog catapulted into the public eye with a major January-to-May exhibit at the Vancouver Art Gallery and an accompanying coffee table book, Fred Herzog: Vancouver Photographs (D&M $45), with textual contributions from Grant Arnold and Michael Turner.

“I never went to school to learn photography–not a single day,” he says.

THURSDAY 13 SEPTEMBER: In the informal setting of a local bar, conversation turns to pornography and literature. Novelist Michael Turner (Vancouver) is author of the 1999 bestseller The Pornographer’s Poem, for which he was awarded the Ethel Wilson Fiction Prize. Xaviera Hollander (Amsterdam) has written 18 novels including the controversial bestseller The Happy Hooker. My Own Story (1971). For 35 years she has written a sex-advice column for Penthouse. Currently she is an English language theatre producer and owner of a flourishing Bed & Breakfast in Amsterdam.
Language: English
Entrance: free
Location: Bar De Schouw, Witte de Withstraat 80, Rotterdam Vancouver Public Library and the City of Vancouver Public Art Program are pleased to announce the installation of a new Aperture Project, Broadsiding by Michael Turner and Geoffrey Farmer. The banners will be installed in Library Square as of January 29.

The Aperture Project consists of six large-scale banners hung within the large rectangular apertures in the Central Library Promenade. Broadsiding will feature two sets of six banners to hang between January and September. The second set will be installed in mid-May.

“The conception and completion of Vancouver’s current Central Library during the 1990s coincided with the rise of the Internet – an information delivery system that has altered how we think of and access libraries, while at the same time has the potential to render them obsolete,” said Turner. “The persistence of these pamphlets suggests that a space between adjustment and obsolescence might still exist for the library.”

Turner’s texts freely associate with the Central Library’s origins and architecture, various sources and styles of address – oracles, oratory, superstition, information systems, obsolescence and ruins. The banners act as editorial broadsides rather than as informational handouts. The texts “behave like aphorisms, poems even, their rhetoric modeled after Roman orators like Cicero. Reading them left to right one might get a sense of the building’s history, from conception to use,” he added.

The installation is the seventh work commissioned for the Aperture Project, presented by the Vancouver Public Art Program in partnership with Vancouver Public Library. Broadsiding is a co-production of Every Letter of the Alphabet, a project commissioned by the City of Vancouver through its Olympic and Paralympic Public Art Program. The Aperture Project is supported by the Library Square Endowment Fund: a $475,000 endowment created by Vancouver City Council in 1995.

Fearless in form, 8 × 10 casts aside traditional narrative structure and characterization to delve deeper into the issues gnawing at today’s global society. Through a sequence of possibly intertwined events, the author creates a challenging portrait of our modern age, drawing solely on the actions of people rather than their appearance — whether advertising executives or soldiers, tailors or doctors — they fall in love, have children, fight in wars, and flee their homes. In 8 × 10 there are no names, no racial or ethnic characteristics, and only a vague sense of time. Michael Turner’s first book, Company Town, was nominated for the 1992 Dorothy Livesay Poetry Prize. His second book, Hard Core Logo, was made into an acclaimed feature film and his screenplay-cum-novel, American Whiskey Bar, was produced as a live television special on CityTV in 1998. He lives in Vancouver.

Michael Turner’s Kingsway (Arsenal Pulp $14.95) is being re-issued for a 20th anniversary edition that includes a new essay and photographs by the author. First published in 1995, Kingsway is a collection of linked poems that revolve around Vancouver’s oldest thoroughfare.