You may say she’s a dreamer

Imagine. Just imagine. That's what John Lennon asked people to do. And that's what Jewelle St. James did. 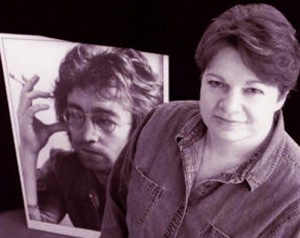 After ten journeys to England, Jewelle St. James has put her love affair with John Lennon to rest.

For three decades Jewelle St. James believed she and John were lovers–twice– in two previous lifetimes. And so she wrote three books about it.

Born in 1953 in Duncan, B.C., Jewelle St. James grew up in Field, B.C. before moving to Revelstoke in her teens.

Inexplicably her life was blown off course, backwards through time, by an inescapable feeling that she had been John Lennon’s lover long, long ago–in a Medieval English village during the 1600s.

This obsession, or spiritual possession, began when John Lennon was assassinated on December 8, 1980. For four years afterwards, St. James was in a state of perpetual grief. Her husband Bob was, in a word, skeptical. She couldn’t explain why she was grieving for someone she had never met.

The quest to validate her feelings led her to the Sussex Records Office, trying to make a connection between John Lennon’s soul and a 17th century Fittleworth resident named John Baron. Was her soul somehow related to the soul of a woman named Katherine James of Petworth? born in February of 1666? Possibly on February 12th, her own birthdate? All you need is love: Jewelle St. James & her granddaughter

Delving into reincarnation led to the demise of her marriage and also produced a remarkably readable self-published account of her predicament and quest, Just Imagine (1995). Whether you’re a complete skeptic or not is secondary to the fact that it’s quite readable and engaging.

St. James’ psychic journey continued in All You Need Is Love (2003), introducing new characters that included one of the Bronte sisters. Towards the end of the second book she begins to understand how her imagined love affair with John Lennon–when he was John Baron and she was Katherine James.

Channelled through a psychic, John Lennon once spoke to her, saying only, “Follow your heart, Katherine. I am waiting in the wings.” And some floxgloves had once whispered, “Heal, Heal.” But feelings keep transforming. Love, apparently, is a many-splendoured, many-splintered thing. Whenever she hears Van Morrison singing ‘Crazy Love’, she thinks of Patrick Brian White, not John Lennon. St. James’ third and final book related to Lennon was first released as The Lennon-Bronte Connection (St. James Publishing 2011). It purported to reveal that John Lennon was the reincarnation of the troubled Branwell Bronte, brother to England’s literary sisters Emily and Charlotte, who apparently bore some obvious resemblance to John Lennon.

John Lennon might have been pleased. He and Yoko Ono had speculated that they were the reincarnated spirits of the Victorian literary couple Elizabeth Barrett Browning and Robert Browing. Possilby influenced by George Harrison’s investigation of eastern mysticism that led them to a brief sojourn to India, the Beatles were not resistant to the possibilities of reincarnation. After John Lennon died, the remaining three members of the group recognized John’s presence was revisiting them (in the form of a bird).

Dissatisfied with the book herself, St. James “went back to the drawing board” and rewrote revised the book with a new title, John Lennon and the Bronte Connection (2015), available via Red Tuque Distribution. She did so after the Bronte Parsonage Museum in Haworth, Yorkshire, England requested a copy of the new book for their Research Library. St. James had visited the museum for her research that included a stop at the town’s local pub where a chair supposedly favoured by Branwell Bronte is proudly displayed. Skeptics will want to know Jewelle St. James also wrote a fourth book, Jude (St. James Publishing, 2006), that recalls her past life as a young Jewish woman in Auschwitz in the 1940s, with archival photos as illustrations. It includes a disclaimer. “The views or opinions expressed in this book and the context in which these images are used do not necessarily reflect the views or policy of, nor imply approval or endorsement by, the United States Holocaust Memorial Museum.”