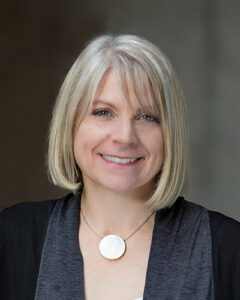 BCBookLook: When did you decide to write your first novel, The Broken Places (Newest $24.95) and how long did it take to finish?

Frances Peck: Fittingly enough for a novel about an earthquake, the writing unfolded in what felt like geologic time.

Back in 2012, I decided it was time to take a serious stab at writing a novel. I cut back on my paid work (as a professional writer and editor) and gave myself one year to write a first draft. The result was not The Broken Places. It was a different novel, one that landed me an agent and got a lot of interest from publishers but no offer.

Still, I was encouraged by the attention the book got. I put that first manuscript in the drawer and turned to another idea. In 2013, I’d been hiking in the North Shore mountains one day, no doubt avoiding work on the first novel, and suddenly wondered what would happen if an earthquake struck right then and there. What would I do? How would I get home? How would I find my husband? What happens to families that are separated in a disaster? Those questions and a bunch of others led to the premise for The Broken Places. I started the first draft in 2014, while my other novel was being shopped around, and finished it in 2015. I handed in the final and umpteenth draft in 2021. Like I said—forever.

BCBL: What made you choose the backdrop of a major earthquake in Vancouver?

FP: Who knows? It’s not like I was some expert on earthquakes. What I knew about them would fill a cartoon pane. When I moved to Vancouver in 2005, I barely even knew it was earthquake territory. All I knew was that the man who’s now my husband lived here, so I wanted to be here too. Later, when I learned that earthquakes are a real threat here, I mainly felt scared. Maybe that’s why I chose the topic. Fear is a powerful muse.

BCBL: Did you have to do a lot of research for the story about what could potentially/likely happen in such an event? And did the research impact the direction of your story in any way? 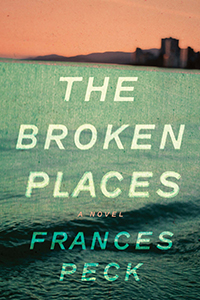 FP: As it turns out, a cartoon pane’s worth of knowledge does not a novel make. I did a ton of research, and at every step I cursed myself for choosing a subject I knew so little about. Fortunately, besides all the publications, videos and images out there, I found John Clague, Professor of Earth Sciences at Simon Fraser University. His name kept popping up in the seismic research and in TV and radio interviews. The day I screwed my courage to ask him for an interview, the book took a different turn. Talking to John about the kinds of earthquakes our region is susceptible to, I realized I had to rethink a lot of the technical details in my early draft. Fortunately, The Broken Places is a character-driven novel. It’s more about people and relationships than the Richter scale or surface waves. So it didn’t mean a total rewrite. If there are still technical errors in the novel, they’ll be minor, and they are not attributable to John. He gave so much of his time and expertise. And for what? A couple of cups of coffee. And maybe, though I can’t recall for sure, a muffin.

BCBL: Two of the main characters, Kyle and Charlotte, seem like privileged, wealthy people. Describe how you developed them for this story. Does the (temporary) loss of their regular lives change them?

FP: I was raised in rural Cape Breton, in a lower-middle-class family. Where I live now, in North Vancouver, I don’t have to go far to see extreme wealth. Charlotte in particular is rich—she comes from old money and is married to a tech tycoon. Her world is foreign to me, so making it real meant (again) a lot of research. In the end, though, Charlotte is a woman. The earthquake sends shockwaves through her, and through Kyle and all the characters, forcing them to confront who they really are and what matters to them.

One thing I wanted to explore in this book is how in a disaster, when basic infrastructure and communications collapse, the skills and assets that keep the wealthy aloft suddenly mean less. When you’re sheltering in place and trying to survive, it doesn’t matter how many purses you own or how big your social network is. You need practicality, muscle, mechanical know-how. In The Broken Places it’s the blue-collar characters—like Joe, a landscaper who ends up in Charlotte’s mansion, and Anna, a caregiver from Ukraine—who know what to do. They are our everyday heroes, and they’re more in the spotlight now than when I wrote the book, because of the pandemic.

BCBL: Are there overt messages in your novel, such as the ultimate importance of family and loved ones?

FP: There are a number of themes: class and wealth, love and lust, fear and power, identity. Overall, the title best sums up what the novel is about. It’s from an Ernest Hemingway quote: “The world breaks everyone and afterwards many are strong at the broken places.”

BCBL: Are you planning a sequel?

FP: No sequel. But the first novel I wrote, the one that ended up in the drawer for a while? NeWest Press will publish it next. Uncontrolled Flight is also a B.C. novel, also centred on a disaster, though on a smaller scale. It’s about a pilot who dies in a plane crash while fighting wildfires in the Interior. The story explores the investigation into the crash, the secrets that emerge, and the people left behind. Look for it in fall 2023.