Uphill all the way 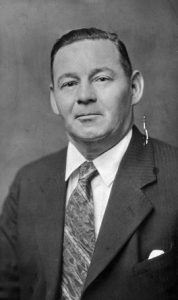 Previously a mayor of Fernie, Thomas Uphill (at right) was B.C.’s longest serving MLA from 1920-1960. His political career began during British Columbia’s Prohibition. Uphill opposed Prohibition on the grounds it restricted the average worker’s right to enjoy a well-deserved beer at the end of his working day. Uphill famously stood up in the Legislature and brandished a bottle of beer, declaring, “Beer is as necessary to the worker as milk to the baby… Hands off the workers’ beer!” Wayne Norton, author of Fernie at War: 1914-1919 (Caitlin $24.95), has been campaigning to get a plaque for Uphill installed at the Legislature in Victoria. At Norton’s book launch, at Swan’s Brewpub in Victoria, patrons will be able to enjoy a new beer named Thomas Uphill Amber Ale. The event commences at 7 pm at 506 Pandora Street on Tursday, October 26. 978-1-987915-49-5