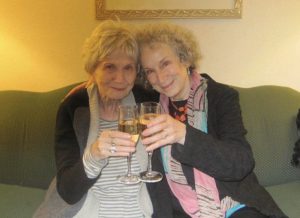 “This book informs us that the choir matters as much as solo performance,” says reviewer Linda Rogers.

They used to throw women artists in mental institutions, our radical behaviour disruptive to the norm. Across the street from my house, there is a half way home for mentally challenged adults, the victims of birth, accident and human cruelty. Some of the residents wander the streets wearing earphones, channelling music that blocks out the too many sounds of modern civilization.

Now, women artists are freer to leave the shadows and make noise, but sorting the pitches and finding harmony is a daunting task given the matrix of cultural confusion. This Patricia Demers attempts to sort with her ambitious book about Canadian women writers.

Demers has mapped an overview of selected authors of poetry, fiction, non-fiction and film and this reviewer is reminded of the west coast Indigenous practice of throwing the bones of the first salmon back in the water, so that the fish might put on a new gown regenerate, flesh on bone. That is the function of her book, well-organised in categories of genre, with an introduction and conclusion and timeline “…that reflects the hybridization of changing demographic, economic, linguistic and community conditions,” a skeletal reorganization ready for whatever comes next.

It is a motion study and undertaking a project of this scope, to transform the metaphor, which is probably acceptable in the nation of our founding mothers, is to risk missing the forest for the trees. Demers acknowledges the challenge of diversity and limitations of space. Especially since the advent of Creative Writing schools and the consequent burgeoning of the witness population, pulling the threads together and finding the gestalts that properly identify our mutating culture is an undertaking that will continue to expand in further studies. With Women’s Writing in Canada, she gives us a valuable resource, good bones, warp, and woof for future discussion, the framework constrained not by genre but by personal choice.

This is a reference book, valuable for students of Canadian literature, who can extrapolate from trees in winter to make the case for various narratives, all of them one way or another stories of resistance, Alice Munro to small town Presbyterianism, P.K. Page to the super ego of an obsessive compulsive artist corralling her own inner voices, Adele Wiseman, bearing the world of child exploitation on her shoulders, Margaret Lawrence enduring the beauty myths that surrounded her, Deepa Mehta to the cultural constraints of misogynistic culture and Jean Coulthard Adams to compromises in a life and art defined by her gender, to name a few.

As these women dared, they explored a landscape that defied the paradigms of post-colonial Canadian society. There is a reason why the voices of Alice Munro, Margaret Atwood, and Mavis Gallant rose mid-century to demand international attention. They were fresh and rose out of the ashes of colonialism to seed their own surrounds. Now that the same landscape is being reclaimed by Indigenous writers, many of them women claiming hereditary rights almost obliterated by the Indian Act and its patriarchal model, we are enjoying a new freshness, women’s voices continuing to dominate, because, as Demers observes, we live real lives.

Statistics show little girls are compulsive readers and it is accepted wisdom that reading creates empathy and that writers emerge from the cocoon of childhood, reading pencil ready. It is logical that the stories that compel us, all chakras, from the carnal to the spiritual, from Lady Murasaki, the first novelist, to Yasuko Thanh, not the last, are written by women. We have taken off our girdles, broken free from the boundaries meant to define us in a glorious explosion of colour and light.

Alice Munro’s observation about fiction as recycled truth guides us to comprehend narrative patterns emerging from the sighing of specific branches in the big orchestra of the forest where trees tell their stories. What the reader or researcher has to do with this book is to conflate academic observation with the living work and look to the deeper language, roots described by the conversation of women. Every tree matters, but each is part of a symbiotic whole, the biodiversity of our sex.

We are all nurse logs, especially artists. The paint on the canvas, the notes on the score, the words on the page, and the frames in the film all delivered in convulsive contractions from a common being, one woman, one story, interrupted and mended by the many repairing the One.

Mask of Dzunak’wa, Wild Woman of the Woods, by David Mungo Knox of Fort Rupert. Photo courtesy of My Mondo Trading

In the days to the countdown, while the mother principle hangs on cosmic scales, we insist, like Dzunuk’wa, the forest warrior who steals the children of people who disrespect trees, that some trees will burn so the forest can survive. Too many have been sacrificed for toilet paper and books of limited meaning. Demers is looking for the deep language in the ones that move her to redemption.

This book informs us that the choir matters as much as solo performance. The real story is about how our creativity has been formed and malformed by patriarchal values, and how a feminist agenda is defining the new order in Canada, a moment captured in the current story of a political truth teller, a woman who stuck to a higher principle. 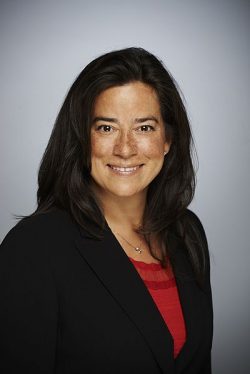 No one knows better than Indigenous artists the ways in which women have been affected by the position of patriarchal values on our creativity. Once equal under the sky, Indigenous women have been subjected to the worst forms of misogyny, inside and outside their own cultures. They are no longer standing for that, a point observed in this book, which documents a new generation of storytellers moving past oral to written tradition. These women are uniquely positioned to lead their fellow creators back into the woods, from whence life comes. We have common cause, the survival of our children in a country and a planet destroyed by the competitive nature of men.

She nods to awards, a new phenomenon in the formerly sacred art forms, art for arts sake, music for joy and lamentation, literature for sharing the human story. The advent of creative writing schools led to new vocabularies, careerism and competition with its inherent dangers. Many of our women writers have now been commended, even exalted. In a perfect world, there would be no contests, an invention by men to control women infected with soul eating diseases. As Canadian women’s voices move beyond the need for inclusion, which means competition with men, they will find their own harmony. 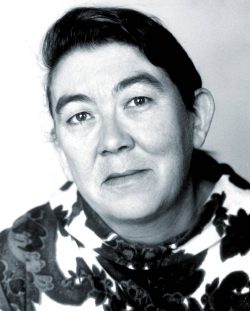 Once ideas have been received they are no longer dynamic in the evolutionary process, which needs constantly revitalization. We invent and reinvent, a process Demers diagrams.

“Of course,” she writes, “poetry, fiction, drama and essays are not primarily sociological documents but idiosyncratic, personally contoured reflections. The prismatic forces of human imagination, we realize, are most adept at translating the capitol “H” of history into the emotive effects on an individual life.”

We are one in the many, ultimately the One. There was that moment of grace when Atwood, Nobel aspirant, gave accolades to Alice Munro, then the new laureate, a sisterhood that is too often eclipsed by the transient notion of winning.

These are the details that breathe between the lines in Demers’ book. What she has given amounts to an annotated bibliography of selected artists that prompts broader discovery of meaning in the lives of creators drawing us into the larger narrative. Women and aspirants in the mosaic, separate pieces, individual trees, become a living forest.

There is not enough air and light for everyone. This is the mixed blessing of culling which avoids obscuring the clean gestalts that define routes to the light. Selection is a balancing act, because acceptance can be the precursor to conformity and conformity is compliance. The forest is a life lottery under a canopy that shades.

Demers prunes and fertilizes as her observations struggle to expand and contract the parameters of our national consciousness, the notion of diversity that inspired and guided the Cultural policies of our emerging nation.

Her map shows how women on fire, challenging the old norms of style and content, are no longer constrained by patriarchal society. This book marks the moment a match is struck. The forest was dying, long live the new forest. The best is yet to come.

Disclaimer. Linda Rogers, while eschewing the neo-capitalist notion of competition, has nonetheless cherished awards named for women writers: The Gwendolyn MacEwen Award, The Dorothy Livesay Award, The Petra Kenny Award (UK), and The Rukeyser Award (US). Her most recent books are Crow Jazz (Mother Tongue, 2018), featured in the Ormsby Review, and a kids’ collaboration with Kwagiulth Chief Rande Cook, Yo! Wik’sas (Exile Editions: 2019), questions for the invisible Siri, female Creator.