At age 37, Ray Garford commenced eight years of teaching in rural Zimbabwe and Botswana, described in his memoir Two Goats, One Wife. 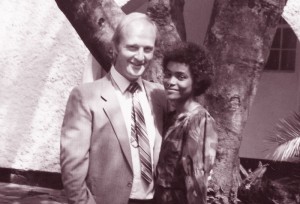 After Ray and Tendai Garford married in 1988, he paid the bride-price of two goats to her father.

Education in the nascent nation of Zimbabwe was a privilege taken seriously by students.

Born in 1947, Ray Garford left rural Alberta at an early age with his widowed mother for a return to her native England where he was educated. Hitchhiking and working his way around Europe encouraged his wanderlust, prompting his return to Canada where he enrolled at the nascent Simon Fraser University in 1966 in spite of having not completed all his requisite studies in England. While majoring in English, he also gained a teacher’s certificate. Some involvement with the Vancouver theatre scene led to a job as the business manager of the new Vancouver Shakespeare Festival in Vanier Park (later resurrected as Bard on the Beach). That venture failed, along with his marriage, so he responded spontaneously to an employment notice at Canada Manpower on Pender Street in Vancouver. The World University Services of Canada (WUSC) was looking for teachers for the newly independent country of Zimbabwe, a post-apartheid society formerly known as Rhodesia under the thumb of white supremicist Ian Smith. So it was that Ray Garford, at age 37, began his three-year teaching stint in rural Zimbabwe in 1985, leading much later to his very readable and well-written recollection of various postings for a memoir, Two Goats, One Wife (Poplar Publishing 2015). The title of this exemplary, non-self-aggrandizing account is derived from his marriage to Tendai in April of 1988. She had joined the freedom fighters against the Smith regime at age eleven. Tendai did not tell her parents or relatives about her courthouse marriage. After a honeymoon in Botswana the couple went to her remote village in January of 1989 where a traditonal marriage ceremony was enacted during which Garford was required to pay the bride price of two goats.

Education in the nascent African nation was a great privilege taken seriously by the students. For girls, it was a relatively new phenomenon. Garford repeatedly tried to help disadvantaged students who were clearly worthy, sometimes providing economic assistance, and possibly this consistent attitude of altruism contributed to his marriage. Tendai was not an exemplary student but her character was strong. She had joined the freedom fighters after she saw some French Legionnaires at the market, who told a group of young boys that there were sweets inside the barrels of their guns. When the boys opened their mouths and put them up to the guns, the soldiers pulled the triggers. She saw three boys die; she knew them all from school.

Thereafter Tendai had spent eight months with the rebels before being carried on their shoulders across the Zambezi. Because they were not attacked by crocodiles, the soldiers believed that been protected by a spirit of Tendai’s ancestors. She spent the duration of the war in a rebel camp in Mozambique. After that, she seldom saw her family. Garford was lonely and not getting any younger. While raising their two children, Richie and Julia, Garford taught in Botswana, gaining experience as an administrator, until bringing his family to Powell River, B.C. in 1994.

“There were bi-racial couples who returned to their home countries,” he writes, “and some managed to stay together, and equally, others didn’t. It was definitely easier to get your spouse into Canada in the 1980s but became progressively harder as time went by and the conservative elements in the West decided to man the barricades and keep economic migrants at bay. By the time Tendai and I returned, the cost of applying for her to enter the country had gone up by over 400 percent from our first application.”

Having since retired to Courtenay, Ray Garford keeps in touch with some of his former students in Africa via social media. They call him “Kule” which means Grampa in Shona.

HERE IS AN EXCERPT FROM THE BOOK, DESCRIBING SOME OF RAY GARFORD FIRST EXPERIENCES AS A TEACHER IN RURAL ZIMBABWE

I took a deep breath and entered the classroom, “Hello everybody!”

This was met with that oft-practised choral line, “Good morning, teacher.”

“Hallelujah!” I thought to myself. “I’ve hit the jackpot!” This was like being back at my boarding school in England, teaching more-or-less what I had studied as a kid! Polite and obedient children! Young minds who were open to the idea of learning!

After taking attendance, which went very smoothly as my predecessor had left seating charts, his former lesson plans, as well as notes about who would be most helpful, I looked up and dove in with both feet.

The illusion of innocence was quickly shattered a few days later by a lunchtime altercation between Mandy and Elijah, two Form 4s  who had been assigned to me as homeroom students. The normal course of events would be a fairly loud and rather public flogging, something for which I had no stomach.

“She insulted me” was all I could get out of him at first. Beating up a girl did not sit well with me, so I insisted on knowing more. However, Mandy’s performance of loud wailing and buckets of tears seemed a bit over the top, and as I could see no blood, I was going to ask two of the girls, who had all clustered around her, to escort her to her  dormitory.

It was at this moment that Major Magwaza arrived. The students scurried back to their desks and sat obediently and quietly with their eyes facing the floor. My heart lurched. I had failed to control my class, and the Major had borne witness to the event. He addressed the class in Shona, so I was unable to follow what was taking place, then he ordered Elijah and Mandy out of the room and the three of them departed.  A few moments later we could all hear the blows of a stick raining down in the staffroom a few doors along the corridor.

I was angry at Elijah and was not prepared to let this be the end of things when, a few minutes later he returned to the classroom.

“I want you to come to my house after tea time this afternoon,” I told him and he hung his head and sat, not really paying attention to the rest of the lesson which, by coincidence, happened to be dealing with the witches in Miller’s “The Crucible”. As it turned out, our meeting proved to be a fruitless encounter and, recognizing it as such, I told the sullen young man to return on Saturday morning with a shovel and a desire to do some work. I needed to convince the other students that Mr. Garford was not a pushover and was not prepared to let discipline slide. They were all certainly watching me carefully, thoroughly, over this issue.

That Saturday, before I was fully awake and breakfasted, there was a knock at my door. Elijah stood before me, glistening with sweat, and behind him I could see a wide trench of newly dug soil where the vegetable beds of the former tenants had once lived.

It was an ambiguous question, and I could see him looking discreetly at me. In my “Africa 101” orientation class, I had learned that it was impolite for African children to look directly into the face of an elder. Armed with this knowledge, I could see he was asking me indirectly if there had been enough effort put into his punishment that he could be dismissed, as well as asking me if I liked what he had done and it was sufficient for my needs.

“That looks very nice, Elijah, but please rake it so we can plant something.”

I headed off to visit the German couple. Elijah would not have the satisfaction of determining the length of his punishment so I decided to project an air of indifference and turned my back on him. It didn’t really suit my character and, in spite of myself, I soon returned. Much to my delight, a first bed looked comfortable and soft enough for me to curl up into. He had raised the soil into a mound and left a small trench around it, allowing for a small barrier between the bed and the inevitable weeds.

“I think we need some tea, Elijah.”

For the first time since the incident, his smile shone, cheekily, and he replied, “I have not finished yet, Sir.” With that, he returned to his task.

By the time he had finished the sixth bed he began to slow down. This time the cup of tea and a thick slice of bread were gratefully received and, after hosing himself down and drying himself off with his shirt, he came and sat in the kitchen.

“Why did you beat her,” I asked as he bit into the bread.

“She wanted me to make love to her.” It was a simple, direct response that I was entirely unprepared for.

“She is a prostitute.”

“That is very harsh,” I replied. “Surely she was just expressing her interest in you as a boyfriend?”

“She has been bothering me for many weeks now. I need to pass my exams. I don’t want to become one of her lovers. She is trying to bring me down to her level. I had to teach her a lesson!”

“But a real man must never beat at woman, Elijah. Has your father never told you that?” I asked.

“Eh-he,” he sighed, realizing that the murungu (white man) was not getting the whole picture. “That is of course true, Sir. But my father also told me that it was most important that I complete my education. Look around Sir, outside the school. What do you see?”

“Lots of fields, lots of huts, lots of families and children… So what is your point?”

“That, Sir, will be my future too if I do not do well at these exams. I do not wish to become a farmer, like my father, nor does he wish me to become one either. That is why he has sacrificed so much to send us to school.”

This brief conversation opened my eyes to a deeper trust that had been placed in my hands. I understood what was really going on at this idyllic little rural school. The struggles that both the boys and the girls were seeing as their future surrounded them in the form of the dry pastures and as-yet-unploughed fields of rural Zimbabwe. The poverty I beheld would be the norm for their lives if they failed. The girls who realized that they were going nowhere with their academic futures, were looking to connect with a young man with promise so he could be their ticket out of poverty and failure.  Mandy was not stupid, but she clearly saw that she was not likely to obtain sufficient credits to qualify for her ‘A’ Levels, the all-important key to a salaried future. In Elijah, she saw potential husband material and a paying job, not an endless dependency upon the whims of Mother Nature.

Elijah knew he had a shot at making his family proud, and a means of repaying the investment they had made in sending him to school for such a long time. He also understood the cost to his parents, and he was determined not to let them down.

All too soon a bell summoned Elijah to the dining hall for lunch. However, much had changed for the two of us. The murungu clearly had much to learn and Elijah, as it turned out, had much to teach.

3 Responses to “Two Goats, One Wife”