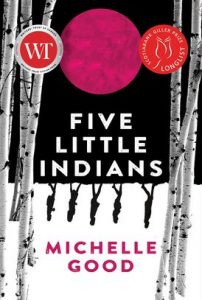 Michelle Good’s Five Little Indians chronicles the lives of five residential school classmates (Kenny, Lucy, Clara, Howie, Maisie) after all have been forced to attend an unidentified Mission School. As soon as they can, the five leave and gravitate towards Vancouver’s Downtown Eastside. Kenny (looked upon as a hero because he escaped) is a drifter and an addict. Clara is radicalized by the American Indian Movement. Howie is imprisoned. Maisie chronically flirts with danger. Lucy pines for Kenny and has a secret compulsive disorder. The novel does not concentrate on details or the degradation endured at the residential school, rather Good sympathetically outlines five decades of attempted recovery.

“Intimate and ambitious, Michelle Good’s Five Little Indians is a heart-breaking account of lives shaped and destroyed by the residential school system. Here is powerful testimony, expertly crafted and wisely observed, tragic yet full of redemptive moments. An unflinching, compassionate and moving novel about the struggle to live and love in the wake of deep trauma,” the jury said in a statement.

Other literary prizes that have listed Five Little Indians as a finalist include the Scotiabank Giller Prize and the Atwood Gibson Writers’ Trust Fiction Prize. 978-1-44345-918-1 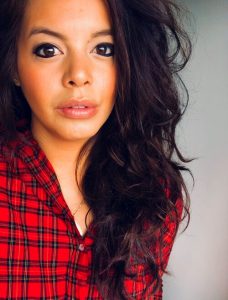 Kim Senklip Harvey’s Kamloopa is a play about two Indigenous sisters and a Trickster who are making their way to Kamloopa, which is the largest powwow on the west coast. Along the way, they connect with their ancestors, their culture and each other.

“The brilliance, the irreverence, the fire of Kamloopa sweeps us into the world of three Indigenous women on a mind-bending quest. The audience is seduced by the love, humour and depth of these matriarchs as they embrace and celebrate who they are in the world and with each other. A play that will encourage you to re-evaluate your relationship with Canada,” the jury said in a statement.