Twenty-five years of Poetry in Transit 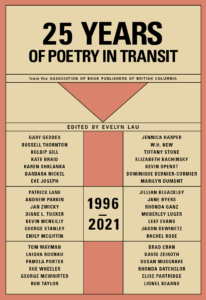 Some of the most eye-catching reading material on Vancouver’s public transit is displayed on the poetry posters that occasionally appear among the ubiquitous ads above the windows.

Dubbed “Poetry in Transit,” the program has become a mainstay since its introduction in 1996 by poet Sandy Shreve and supported ever since by the Association of Book Publishers of BC (ABPBC). To celebrate the 25th season of this wildly popular initiative, the ABPBC has released an anthology of 40 poems as selected by poet Evelyn Lau.

Lau stated in her Introduction that Poetry in Transit has been as good for poets as the people who get to read the poetry as it has featured “hundreds of emerging and established poets, some of whom dreamt of their poems riding the bus long before they began to publish. Even award-winning poets have cited the selection of their work for Poetry in Transit as the highlight of their careers, thanks to the program’s ability to reach audiences beyond the literary magazine, bookstore and cafe reading circles.”

Lau wrote that editing this anthology was a “dream job, the best I’ve had in years,” but having to choose 40 out of all the poems that have been displayed in 25 years, was difficult.

“I revisited names and faces from the 1990s, some gone silent, others who went on to national acclaim. Often, their subject material was reflective of the times, and of the province they had chosen to call home — from the travel-brochure beauty of British Columbia’s coast, islands, and interior, to the economic and social challenges of its towns and cities.”

Patterns began to emerge to Lau and she ultimately ordered the poems into three sections: work and art, place and transportation, and family and relationships.

A digital copy of the anthology can be found at this link: poetryintransit25.ca.

Only a limited number of print copies of the anthology were produced and most of those were for the publishers and poets whose work is featured in the campaign. But in an interesting twist, the ABPBC and some of the contributing poets have hidden print copies around the TransLink system for lucky readers to find. Happy hunting poetry lovers!

Evelyn Lau is the author of thirteen books, including eight volumes of poetry. Her work has received the Milton Acorn Award, the Pat Lowther Award, and a National Magazine Award; she served as Vancouver’s Poet Laureate from 2011–2014.

Poetry in Transit has been running since 1996, making it the longest-running poetry on transit program in Canada. Poems eligible for the project must be by writers who reside in BC and published in book form by Canadian publishers. Poems are submitted by publishers and selected by a jury.

The Poetry in Transit campaign is presented by the Association of Book Publishers of BC in partnership with TransLink and BC Transit.