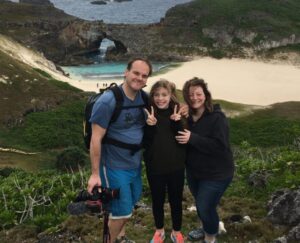 V is for Vannini
After five years, 400 interviews and 250 ferry rides Phillip Vannini released Ferry Tales: Mobility, Place, and Time on Canada’s West Coast (Routledge, 2012) about ferry-dependence on island and coastal communities of the west coast. His upcoming release is co-authored with April and Autumn Vannini, In the Name of Wild: One Family, Five Years, Ten Countries, and a New Vision of Wildness (UBC On Point Press $24.95), due out in October. The Vanninis set out to find what the terms ‘wildness’ and ‘wilderness’ mean to people around the world. Hint: it’s not pristine, untouched nature. Together, the family visited twenty Natural World Heritage sites, including the Galápagos Islands, and discovered that the wilderness is a busy place as many people visit them for lots of different reasons. Phillip Vannini and April Vannini are ethnographers and filmmakers who also co-wrote Wilderness (Routledge, 2016) and Inhabited: Wildness and the Vitality of the Land (McGill-Queen’s, 2021) and the film directors of In the Name of Wild and Inhabited. 9780774890403