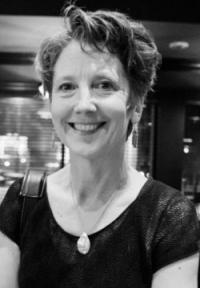 Carrie Saxifrage’s ardent personality is as original as the content of her first book, so that might explain why the epiphany that resulted in The Big Swim: Coming Ashore in a World Adrift (New Society $16.95)—and prompted her to change her name and radically alter her lifestyle—isn’t mentioned until the fourth story of her memoir which is one of six titles shortlisted for the George Ryga Award for Social Awareness in 2006.

It was 2005. She and her husband had bought 20 acres on Cortes Island in 1995. She was on a brass bed, overlooking dripping cedar trees. Her nine-year-old son was reading Tintin in Tibet beside her. Flipping through old New Yorkers, she chanced upon articles by Elizabeth Kolbert about ‘The Climate of Man.’ The series ended with this statement.

“It may seem impossible to imagine that a technologically advanced society could choose, in essence, to destroy itself, but that is exactly what we’re now in the process of doing.”

The matter-of-fact tone scared her. Saxifrage got her husband to agree that family members should limit their carbon emissions to the world average, a quarter of what the average American or Canadian emits.

They sold the Subaru and bought a Prius. They hung their laundry on a clothesline. They wrote bikes more often. They chose electricity over natural gas. But the single largest source of emission on their spreadsheet was a trip to Europe—four tons each. Vacation flights exceeded an entire year’s worth of climate-safe emission in a few hours.

That’s why Saxifrage’s fourth story describes her taking a Greyhound bus to La Manzanilla, Mexico, there and back. “We had committed ourselves to trying to live a climate-safe life,” she says.

According to her research, the 500 million people who constitute the world’s wealthiest 8 percent, with an income of more than $40,000 per year, emit 50 percent of the carbon into the atmosphere.

This is the new frontier.

It wasn’t enough for Saxifrage to serve “on the triple crown of tree hugger community boards [on Cortes Island]: the Linnea Farm Society, the Hollyhock Lifelong Learning Centre and the Cortes Ecoforestry Society.” She had to find redemption, to be good.

“My idea of ‘goodness,’” she explains, “had to do with belonging in a small yet reciprocal way to something huge and beautiful beyond my understanding.”

The Big Swim takes us far beyond the comfortable trendiness of the The One Hundred Mile Diet and a plethora of new, feel-good tomes about how to grow kale on your balcony. Saxifrage and her husband legally changed their surname to Saxifrage, after the tiny white flowers that burst from stone crevices in high meadows. And she is willing to make herself a lightning rod for change—and that means sticking her nose into other people’s business.

Yup, she could be a bit of a nutter. And probably a bossyboots. But she’s a sane nutter. She is leading the way by walking the walk, and talking the talk. The Big Swim recounts how, on a daily basis, she is trying to find ways “to live with the wound of climate change.”

High profile environmentalist Tzeporah Berman has generously endorsed The Big Swim as “Eat, Pray, Love for the climate era.” That’s a bit much because Saxifrage comes across more as a know-it-all than a searcher. But her stories are galvanizing, well-edited, memorable and provocative.

“I think the stories reinforce each other for an overarching narrative arc,” Saxifrage told BCBW’s David Conn. True enough. Here Conn offers his impressions after meeting Saxifrage at a book launch.

The dozen chapters of The Big Swim are drawn from Saxifrage’s recent life. The title piece describes swimming seven km. across chilly Sutil Channel, from Cortes Island to Quadra Island. Others describe her experiences with homesteading, gardening, wilderness travel, being present at the end of her mother’s life, a trip to Kitimat for Northern Gateway pipeline hearings and the local politics of logging on Cortes.

Her persona is practical yet sensitive, with eccentric tendencies. She pokes fun at herself. Some pieces feature deadpan comedy, while others balance tragedy, lyricism and small absurdities in everyday experiences. Whatever its genre, The Big Swim is a self-assured first book.

Carrie and husband Barry avoid flying, choosing to make long distance bus journeys instead. “Carrie doesn’t assail us with the facts,” said Tzeporah Berman at the Vancouver book launch, “we live it with her.”

Growing up in southern California, Saxifrage worked as a nurse and then an environmental lawyer. She kept a journal from an early age. While studying law in Seattle during the 1980s, Saxifrage was inspired by a professor to consider a legal career protecting the environment.

“I was working in the federal courthouse during the spotted owl decision,” she recalls, “and I remember looking out the window and seeing the logging trucks with the big trees in the protests snarling up traffic, and big signs that said, ‘your morning paper’ and ‘your Starbucks cup.’ It really brought home the two sides of the coin, and made me feel like the situation was too complicated for me to figure out.”

Saxifrage first travelled north to Cortes Island to attend the Linnea Farm Ecological Garden Programme. She stayed eight months, “working in the production garden, and taking classes in soil science, cover cropping, and planting. It was on a land trust with a sustainable stewardship mission. It was food security, growing food for your community. They talked about soil science and soil nutrients and biodynamics and planting by the moon.”

After transplanting herself in 1995, she found work at a local school and began to report for The Vancouver Observer, founded by her friend and fellow islander, Linda Solomon Wood. As a sustainability correspondent, she documented the burgeoning movement against Northern Gateway project.

“I see the Vancouver Observer as covering things from a community and a First Nations and a science-based perspective,” says Saxifrage. “I see my role as trying to communicate science-based ideas because I’m not a science-based person, so I think that gives me a real advantage.” Solomon Woods plans to start a National Observer edition later this year.

The Big Swim began to be a book when Saxifrage took a writing course at nearby Hollyhock. Urged on by a friend, she recounted her “self-imposed marathon,”—her long distance swim from Cortes to Quadra—and submitted her essay to CBC Radio. It became an episode in the ‘Living Out Loud’ series. A podcast is archived on the CBC website.

After fifteen years on Cortes Island, the Saxifrage family has moved to Vancouver so their son can attend an urban high school. Accepted into the SFU Writers Studio, Saxifrage benefitted from mentoring by Brian Payton and remains part of a group of alumni, the Nonfictionistas, that meets every two weeks.

As befits someone who has sought to lead a “low carbon lifestyle” since 2006, Carrie Saxifrage went on a cross-Canada tour to promote her new book by bus and train. A former environmental lawyer in the US, Saxifrage likes to challenge herself. She has climbed mountains that include the Matterhorn and Chimborazo, and she opens her book with a gripping memoir that describes her completion of a marathon swim in the Salish Sea. She has contributed to the Vancouver Observer and worked with First Nation communities to help generate their responses to the proposed Northern Gateway Pipeline.

A life-long back packer and cyclist, she homesteads on Cortes Island.

J.B MacKinnon, author of The 100-Mile Diet and The Once and Future World, has recommended  The Big Swim  as “a handbook to living deeply in perilous times.”