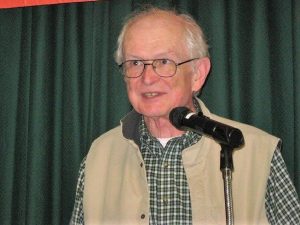 The first non-fiction book about B.C.’s black pioneers, Crawford Kilian’s (pictured at right) Go Do Some Great Thing (Harbour $26.95), concentrates on the 19th-century migration of blacks from California, as encouraged by Governor James Douglas, and particularly the leadership of Mifflin Gibbs who was once told by an associate of the American intellectual and orator, Frederick Douglass to “go do some great thing.”

Victoria City councilor, Mifflin Wistar Gibbs was the first civic leader of black people in B.C. and the first widely-read black writer. He immigrated in 1858, shortly after black pioneers arrived on the Commodore from California. Gibbs wrote many articles and speeches during his ten years in Canada.

Had he remained on Vancouver Island, and his promises made to black pioneers been kept, Kilian has speculated, “Mifflin Gibbs might have become premier of British Columbia, or a businessman on the scale of a Dunsmuir.” Proceeds from the sale of the third edition of this book, with an added epilogue by Kilian, will donated to the Hogan’s Alley Society.

Kilian’s Go Do Some Great Thing inspired the likes of black filmmaker Anthony Brown to make a documentary, “Go Do Some Great Thing,” and historian and poet Wayde Compton to generate his landmark anthology, Bluesprint: Black British Columbian Literature & Orature (2002). Compton also spearheaded Commodore Books, an imprint for black authors of B.C. that was named after the aforementioned ship.

Born in New York in 1941 and raised in Los Angeles and Mexico, Crawford Kilian, a white historian, worked at the Lawrence Radiation Laboratory in Berkeley prior to immigrating to Vancouver in 1967. He has taught English at Capilano College and written 19 other books, mostly speculative fiction novels.

Kilian has cited his debt to an unpublished UBC MA thesis by James W. Pilton, “Negro Settlement in B.C., 1858-1871,” that was prepared in 1951. Commodore Books released a revised version of Kilian’s history in 2008, 30 years after it first appeared, at which time he received an award of appreciation from Vancouver’s black community.