The Fargo of British Columbia 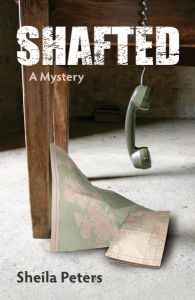 Poet and author Sheila Peters’ fifth book is a murder mystery set in her home town of Smithers. Shafted: A Mystery (Creekstone $18.00) follows an auxiliary cop named Margo Jamieson as she investigates a strange death with the help of a local historian. The story sullies the town’s picturesque façade as it lays bare the conflicting agendas of an old prospector, for sale a rich eco-activist, pharm and a mess of misplaced desire in this mountainous region of northern British Columbia. The time period is the early 1990s when there are no cell phones or the Internet and the death has to be solved with the use of old-fashioned paper files, face-to-face meetings and land line-based telephones. Jamieson, the protagonist must untangle a web of festering grudges, phony mineral claims, blackmail and murder.

Peters will be doing a week-by-week serial release on her website (http://sheilapeters.com/books/shafted-a-mystery/shafted-the-serial-release/) beginning Friday, August 1. Also on that date she will begin reading a chapter a week on the Smithers Community Radio station (www.smithersradio.com) at10:00 am and listeners can tune in online.

Peters has worked as a reporter, weaver, human-rights activist, and English instructor at Northwest Community College, where she also teaches creative writing. Peters’ stories have appeared in numerous literary journals, including Prism international, Grain, Room of One’s Own, and Event. She lives in Smithers, British Columbia.

Other books by Sheila Peters:

Since 1998, Creekstone Press in Smithers has resolutely not operated as a back-to-the-land press that encourages everyone to make log houses or provides home-birthing techniques for cattle.

Run by Lynn Sherville and Sheila Peters, Creekstone has endured for sixteern years as the lone, ongoing, situated-in-northern-B.C. imprint within the Association of Book Publishers of B.C. ever since the untimely death in 2005 of Cynthia Wilson, who managed Caitlin Press from Prince George.

Caitlin continues to publish writers from central B.C., but its headquarters have shifted to the Sunshine Coast.

Creekstone books attempt to do nothing less than reflect life in northwestern B.C. from places such as the Bulkley Valley, Smithers, the Hazeltons, Vanderhoof, the Kispiox Valley, Terrace, the Skeena and Bulkley watersheds, the Spatsizi or Tatlatui Wilderness Parks, Haida Gwaii, the Nechako and Fraser watersheds, the Inside Passage and other traditional Gitxsan and Wet’suwet’en territory—almost half the province.

Sometimes, maybe those of us below the 50th parallel should think of ourselves as the sub-boonies.