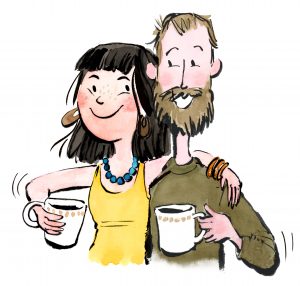 In 2019, Mike Deas co-authored with Nancy Deas (shown in the illustration at right) the first title in the “Sueno Bay Adventures” series of graphic novels, Shadow Island (Orca $14.95) that introduced the Pacific Northwest island and its mystical properties. The second title in this series is Otter Lagoon (Orca $14.95) in which a young girl teams up with a local bad guy to sell exotic animals and stolen crab because she needs money to save a dog that she’s responsible for injuring. She unknowingly disturbs a fearsome sea serpent that hasn’t been around for 100 years and sets off a destructive string of events. She might be in over her head but her friends rally around to support her before the creature destroys the entire island of Sueno Bay. 9781459819641