Before radio lost that lovin’ feeling, a kid from Comox thrived as the Forrest Gump of pop music in B.C. 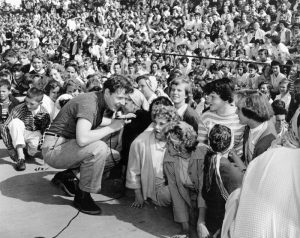 Red Robinson loved the fans, the music and the people who made the music.

Usually cited as Vancouver’s first rock ‘n’ roll deejay, Robert Gordon ‘Red’ Robinson was born in Comox, B.C. on March 30, 1937. He started his career in radio by contributing to Al Jordan’s afternoon show for teenagers on CJOR in 1953. They made contact after Robinson phoned into the show impersonating Hollywood actor Jimmy Stewart who was visiting Vancouver at the time. Red Robinson’s first program called Theme for Teens has been described as the first scheduled radio program for rock ‘n’ roll in Canada. As soon as he graduated from high school in 1954, Robinson became an on-air host, befriending major artists who came to play in British Columbia and frequently serving as an emcee for the likes of Elvis Presley (1957) and The Beatles (1964).

As Robin Brunet makes clear in his biography, Red Robinson is still a beloved hero in Vancouver, as much a part of his city as Gassy Jack or August Jack Khatsahlano. To emphasize that Robinson is much more than a relic, Brunet opens the story with Red Robinson attending Michael Bublé’s wedding.

The glory years of Red Robinson are now almost alien. When Bill Haley and the Comets were singing Rock Around the Clock, before Elvis, rock and roll wasn’t just dangerous, it kept parents up at night worrying about their children’s future.

In those days, as we learn from Robinson’s encounters with the likes of Roy Orbison (after a gig in Port Alberni), celebrities and musical performers could often be found in the backseat of a disc jockey’s car as they went speeding down a highway to catch a ferry.

In those days, requesting an album by a black artist could mean having the cashier pull it out from under the counter in a paper bag, so people on the street couldn’t see what you were buying.

After Brunet introduces Robinson as an important and loved man, he goes headfirst into Robinson’s early career, sprinkling the names of countless celebrities, only to veer further back to Robinson’s upbringing. Robinson didn’t know his father while growing up with his siblings in near-poverty. But there are few tears shed about his tutelage in the school of hard knocks. Instead Brunet shows how Robinson’s innate good humour, optimism and sense of adventure got him going forward, always fueled by his trademark enthusiasm. Robinson disclaims the notion that he brought rock and roll to Vancouver. He was there at the right place, at the right time. His fallback position is humility, but contemporaries and friends such as music agent Bruce Allen (Bryan Adams) are quick to place a lot of the credit on Robinson’s shoulders for bringing a nascent B.C. music business into the mainstream.

There is more to this portrait than a rehash of Robinson’s disc jockey encounters with celebs. We also learn about his stunts, such as the time he was broadcasting live from the bottom of Burrard Inlet in a dive suit—and hardly anyone took notice. His foray into broadcast television, as a sort of alternative to Dick Clark’s American Bandstand, led him to a gig with a Portland radio station which, in turn, led to him getting drafted by the US Army. His enrollment in Advanced Infantry Training (and his superior officers encouraging him to pursue a career military) are sides of Robinson’s story that the average teenaged Beatles fan would never know.

Robinson returned to Vancouver and stayed the course. His love of the city is palpable; and it trumped grandiose career ambitions or possible salary increases from afar. That’s the charm of this biography: Robinson is a man filled with life and love, and never speaks disparagingly about anyone. (Renowned and beloved sports broadcast Jim Robson is revered for his similar appeal.) There were some who cheated him, or treated him unfairly, but Robinson’s respectful nature apparently didn’t allow for him to engage in petty vendettas or slights. But Robinson is not averse to telling it like it is, or was. Even though he was instrumental in the ad campaign that paved the way for the opening of the first McDonald’s in Canada, he has no hesitation in criticizing the company. Increasingly Robinson made his living in the advertising business, buoyed by thousands of friendship and contacts he’d made over decades in the radio and entertainment business. According to Brunet, his honest and respectful nature was an unusual set of traits amongst the large business peddlers and Robinson has kept his integrity in tact. Brunet closes out on accolades and honours acquired by Robinson, but more compelling are the closings are at the end of each chapter, in Robinson’s own words, as he reminisces about the people he has met. To sit back and read those reminiscences from what is so obviously his own voice is a real treat. His respect and awe of these various people shines through as he revels in his meetings with the likes of Steve Allen, Leonard Nimoy, Johnny Carson, The Beatles, Elvis all the way up to Bublé.

Along the way Robinson is quick to point out he’s not literally the last deejay. The title is meant to express that the energy, the connectivity, and the radio business itself is in its death throes. In the old days, deejays were local celebrities; now playlists are compiled by bots.

Robinson compares the demise of his profession to his grandfather’s work on steam engine locomotives on Vancouver Island. He does not express indignation at the changing times, but there’s a sense of sadness knowing something important is being lost.