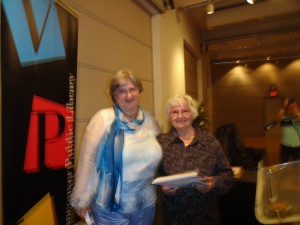 In honour of her brother George Ryga, Anne Chudyk, along with her husband Ted Chudyk, have established two annual $1,000 Anne & Ted Chudyk Memorial Awards in Memory of George Ryga open to fulltime Okanagan College students interested in creating awareness of social issues. “The award is meant to inspire students to follow in George’s footsteps,” Anne Chudyk told the Capital News, “but they need not be writers. It is more important that they demonstrate a strong interest in promoting social justice in some way that will benefit the community.”

Anne Chudyk recently presented the 11th annual George Woodcock Award for Social Awareness at the Vancouver Public Library to Shelley Wright,  a Langara professor who spent ten years in the Arctic that enabled her to write Our Ice Is Vanishing / Sikuvut Nunguliqtuq: A History of Inuit, Newcomers, and Climate Change (McGill-Queens $39.95). It won the award for revealing how the Inuit have become the witnesses and messengers for climate change.