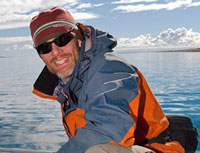 Greystone Books has acquired world English language rights for Rowing the Northwest Passage: Adventure, Fear, and Awe in a Rising Sea (available Fall 2017). This nail-biting read chronicles expeditioner Kevin Vallely’s historic attempt to cross one of earth’s most treacherous waterways, the Northwest Passage, using nothing more than a rowboat.

When Vallely—an adventurer whose credentials range from scaling a volcano in Java to trekking across Antarctica—learns that rising global temperatures have rendered the Passage ice-free for a brief window in summer, he sees the opportunity to fulfill a lifelong dream while also drawing attention to the catastrophic impacts of climate change in the high Arctic. Two years later, he and his team embark on a life-changing journey along the historic route, facing life-threatening storms and unbelievable conditions to reach their goal.

Vallely reveals a natural beauty rivaled by that of few other destinations; he laces his memoir with compelling descriptions of graceful belugas, hairy muskoxen, and herds of caribou. Part gripping adventure story, part striking portrayal of Arctic life, Rowing the Northwest Passage casts new light on place so distant and foreign that to most of us it seems surreal.

Kevin Vallely is an architect, adventurer, and happily married father of two. A member of the Explorer’s Club and an Explorer’s Club Flag recipient, he was named one of Canada’s leading adventurers by the Globe and Mail in 2003. In 2009, he and two teammates broke the world record for the fastest unsupported trek from the edge of the Antarctic continent to the Geographic South Pole.