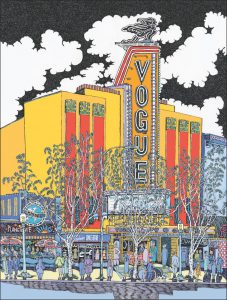 The Vogue Theatre in days of yore stood out more clearly as a civic icon.

Now art critic Robert Amos provides an appreciative look at McKellar’s magical visions of Vancouver in the 1970s and 1980s.

In December 2018, Ormsby Review #449 published a review by Grahame Ware of Revolving W and Flying Pigs: A Neon Journal of Vancouver Vintage Cafes and Theatres, by Keith McKellar (Laughing Hand).

See we published a review

In the seventies Keith McKellar (aka Laughing Hand) landed in Vancouver’s downtown from Prince George. No hippie, McKellar drove a taxi on the night shift, a denizen of the beat zone. He gave that up and became a sort of busker street artist, first in Japan and then back in Vancouver in the 1980s. Self-directed and obsessive, he put in a lot of time sitting on the sidewalk and in the cafes, detailing the urban landscape in front of him. With an ink line that writhes like neon, he never missed so much as the filigree of a fire escape.

Time passed, things changed, and McKellar has had ample time to reflect on all that fabulous signage, in Chinatown and skid row, up Granville, out on Broadway — everywhere. And during that time this artist, bless him, did the necessary research. He talked to the neon makers, sought out the cafe owners and hung out with the denizens of strip clubs. He read a lot of old newspapers. And then he wrote down everything he had learned. As a writer — an engaging writer — McKellar’s literary vernacular can start out with the science of neon-making and then veer deliriously to hipster riffs about the cosmic wonder of the Smilin’ Buddha.

Revolving W and Flying Pigs: A Neon Journal is an evolution of his earlier black and white anthology Neon Eulogy. But this time it’s big — as big as an LP cover. And the ink drawings have been coloured, and there are more coffee houses and nightclubs.

You’ll stay up late reading this book, you’ll pass it around, you’ll want to read it out loud. You’d better get a copy – Robert Amos.

Captain Charles Cates, colourful founder and patriarch of the romantic Cates Towing operation establishes a reliable reputation hauling stone from the quarries of Gibsons and Squamish to rebuild Vancouver following the great fire of June 13, 1886. He builds, in 1913, the first cargo-hauling wharf on the North Vancouver waterfront, at the foot of Lonsdale Ave. By 1921 Captain Cates, joined by three sons, all master mariners, incorporates as a tug and barge transportation company. They perform the primary ship-docking services in the Port of Vancouver for much of the 20th Century. Cates’ operations, robust and varied, include a range of boat building and repairs, plus their dedication and monumental service over many decades assisting in the vast task of moving ships and cargos from all over the world in and out of Burrard Inlet. The infamous Seven Seas Restaurant neon sign (circa 1959) sails bright on blue waves perched atop an antique ferryboat. A hometown beacon at the bottom of the hill at the waterfront and foot of Lonsdale. Their Seven Seas Seafood Buffet Table is legendary. Historically, a 1941 built steam powered, wooden hull, passenger ferry, No. 5 in the fleet and the last to exist in the waters of Burrard Inlet. Decommissioned in 1958. Diamond Almas, the ambitious visionary twenty year-old offspring of the famous King Neptune Seafood Restaurant family, situated at the foot of Eighth Street in New Westminster, converts her to a floating restaurant in 1959. Seven Seas. Low ceilings and narrow corridors; four floors tall with a proud posture and spirit. A scarlet heroic record of active service transporting thousands of citizens safe and sound and home again, supplementing the challenging inlet spanning of the 1938 Lions Gate Bridge and before the 1960 Second Narrows Ironworkers Bridge is constructed. Becomes a unique Vancouver institution. A ship with heart and soul. Gone missing. Demolished in 2002 — Keith McKellar, from Revolving W and Flying Pigs.

Campbell Avenue Fish Dock. Once and for many years Vancouver’s favourite waterfront daytime coffee shop and fish cafe situated up those funky, well trodden, roof-covered stairs atop the tin corrugated cold-storage ice plant. Located behind B.C. Sugar Refinery’s sprawling brick mausoleum. It’s the only place you can wind in from across the tracks and right into the action of a live fish dock. Inside you get a lofty view of raw elemental waterfront life. The Dock is a swarm of new Canadians from many ethnic origins. Beginning sometime in the early thirties … a menagerie of commercial fish exchange; a jumble of draggers, trawlers, gill-netters, packers, trollers, and seiners bobbing and swaying. The exhilaration of a regatta. Broken English and hand gestures abound. Shouting and yelling … a chorus of selling. Deals get done. Resilient people and conditions. Fishing families. The early community has zest and enthusiasm. A classic mishmash of DPs … John Safarik, a Czech, arrives in 1908 is the original tenant and fish trader on the Dock — Icelanders, Norwegians, Slavs, Fins, Italians, the odd randy Scotsman and a few remittance Englishmen, the Chinese and the strong Japanese fleet traders (1,200 boats at their zenith). “There are instances in history’s makings when industry and art intermingle in a utopian marriage.” Now, this once only phenomenon, just an empty hole in the shoreline … an ecological shadow … a spent wharf, shut down 1989. Move out in October. Demolished in December. A hollow. Plucked. A shuffled away historical specimen. Instead of sustaining, there was a gorging. Not much aftermath. An industry eclipsed. Circling gulls call “is that all?” United Grain Growers concrete silos lurk, unclothed by its absence. A tug nosing a renegade log boom. A single train bell at the crossing is melancholy … a rubble and tangle of leftovers and memories. At the edges, patches of bramble, wild salmonberry cane and devil’s club start things again. The old Marine View Cafe and Campbell Avenue Fish Dock will never be forgotten by those who were there. The common denominator is everyone’s need to survive — Keith McKellar, from Revolving W and Flying Pigs.

Campbell Avenue Fish Dock. When the 1910-built Gore Avenue Fish Dock, located just east of Main Street and Crab Park, has a major fire in the early thirties, Vancouver Ice and Cold Storage burns to the ground. Relocation of fishing facilities is constructed at the foot of Campbell Avenue behind B.C. Sugar’s brick refinery. Pioneer fishers and industry workers clamour and scurry, the wooden wharf steeped in colour, and the smelly, intoxicating odour of B.C.’s bountiful harvest. Some trawlers are bringing 140,000 lb. hauls. Grading, glazing, packinghouses and processing plants churn. In the late 1940s women working in the canning lines receive 40 cents an hour filleting and scaling. The halibut cargo Board of Exchange chalkboard bidding auctions are lively affairs. Forklift trucks scat about stacking wooden fish bins, cranes swirl and spin, hooked cables of plum dockets shift about. The gooseneck auger chute from the cold storage ice plant spits out ice dutifully into holds of packers and trollers in berth. A coffee shop first situates on the wharf in the mid-30s, then the Fish Dock Coffee Shop opens at the beginning of the forties on the ground floor of the ice plant building. The first Marine View Coffee Shop originates sometime in the early fifties … a small greasy spoon with a counter, run by Jack Abramson. Expansion moves the establishment upstairs in the mid-fifties to become a breakfast and lunch cafe. By the mid-sixties cook Rudy Welsh introduces fresh fish dishes to the menu, to popular command. She goes on to buy and run the cafe with her daughters Agnes and Audrey. There are 300 people working the fish dock wharf in 1966. In about 1975, Agnes takes charge of the establishment until the late seventies when Audrey and her husband Garry Gurney take over. Garry works for Lions Gate Fisheries for 30 years. Audrey operates the cafe with her daughter Lisa for the last ten years, until the end in 1989. Three generations. Says Ruby Welsh, the twenty-year veteran, “We had a good view … we could see the boats coming in loaded with fresh fish. Some days there were line-ups down the stairs.” Inside you get a bird’s eye view over the hubbub of wharf life and the Burrard Inlet waters all the way to the North Shore mountains — Keith McKellar, from Revolving W and Flying Pigs.

One Response to “Revolving W and Flying Pigs”