Anti-war activist Malachi Ritscher, a Chicago musician, died eight years ago after setting himself on fire to protest the war in Iraq. Jean Smith and David Lester were invited by Democracy Now to discuss his legacy. 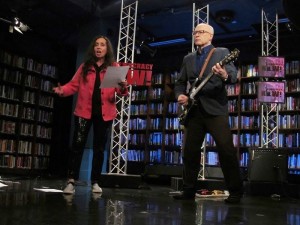 Jean Smith and David Lester were interviewed about the death of their friend Malachi Ritscher for the War & Peace Report, part of an independent, global news hour from New York.

A twenty-minute interview [CLICK below] with the two Vancouver authors will be broadcast to 1,305 affiliated radio and tv stations around the world.

Before he committed suicide to protest the U.S. war in Iraq, Malachi Ritscher posted a message online that read, in part: “If I am required to pay for your barbaric war, I choose not to live in your world. I refuse to finance the mass murder of innocent civilians, who did nothing to threaten our country. I will not participate in your charade — my conscience will not allow me to be a part of your crusade. There might be some who say ‘it’s a coward’s way out’ — that opinion is so idiotic that it requires no response. From my point of view, I am opening a new door.”

Soon after Ritscher burned himself to death—and recorded the event for a video that has never been seen by the public—Lester created a poster commemorating Malachi Ritscher for his series on progressive social agitators such as Emma Goldman and Phil Ochs.

Smith and Lester also wrote and recorded a song called ‘Malachi’ two years ago under the aegis of their indie music group Mecca Normal, founded thirty years ago.

Smith and Lester both knew Ritscher. He recorded one of their concerts as Mecca Normal when they were touring in the eastern U.S. The War & Peace Report consequently included performances of two songs by Mecca Normal, including ‘Malachi.’

Mecca Normal have just released their 13th album, Empathy for the Evil and they will be playing two upcoming shows in Vancouver: Wrong Wave Festival, an art rock festival sponsored by the Unit/Pitt Gallery, with Fake Tears on October 18, doors at 7 pm, at the SFU Djavad Mowafaghian World Art Centre, 149 W. Hastings Street. For further info call 604-681-6740. As well, they will be opening for Mirah, a New York based singer-songwriter, November 15, doors at 7 pm, The Media Club, 615 Cambie Street. More info at 604-608-2871.

Since founding Mecca Normal, both Smith and Lester have forged separate paths as authors. Born in Vancouver in 1959, Jean Smith is the author of two novels I Can Hear Me Fine (Get To The Point Editions, 1993) and The Ghost of Understanding (Arsenal Pulp Press, 1998). She has received two awards from the Canada Council for the Arts as a professional writer of creative fiction (2000, 2007) and a grant from the B.C. Arts Council (2000) to complete her third and fourth novels. Smith was named one of the “Top 50 Writers in Vancouver” (Vancouver Magazine), one of the “Top Ten People Who Matter” (San Francisco Weekly) and “one of Canada’s best-kept secrets in the arts” by the Globe & Mail. Other literary works include:

Born in Vancouver in 1958, David Lester has long worked as the designer for B.C. BookWorld. In 2011, his 300-page graphic novel The Listener was published by Arbeiter Ring Publishers of Winnipeg. Seven years in the making, it quickly went into a second printing. It was a finalist for a Book of the Year Award sponsored by the US magazine ForeWord Reviews in the graphic novel category. Preceding literary works include:

Malachi (18 x 28″ poster) by Mecca Normal guitarist David Lester is included in the 2014 Whitney Biennial. The exhibition also includes a recording from a live set performed by underground rock duo Mecca Normal, and both sides of the cover of the Mecca Normal 7″ record that includes the song Malachi about war protester Malachi Ritscher. The painting on the record cover is called Discovering Utopia by Mecca Normal vocalist Jean Smith.

These four artifacts are part of Public Collectors: Malachi Ritscher – an exhibit curated by Chicago’s Marc Fischer about American activist and music documentarian Malachi Ritscher (1954 – 2006) who self-immolated on a freeway median outside of Chicago to protest the war in Iraq. Ritscher made a video of this action that was not widely seen.

“It was Malachi’s intention for the video of his protest, his death, to reach people through mainstream media, to jar them from complacency, to have them raise their voices to end the war. But that wasn’t what happened. The video was not released in that way. When we added our song – and the poster – to our performances and classroom events, we regarded them as extensions of Malachi’s intention. We had created documents about the documentarian whose final statement on war was not heard. We created art and music because Malachi’s voice was not heard.” – Jean Smith, from the 2014 Whitney Biennial catalog

David Lester is a visual artist and the guitar player in the rock duo Mecca Normal from Vancouver, Canada.

Jean Smith is a novelist, a painter, and the lyricist/vocalist in Mecca Normal.

Malachi – the title of David Lester’s poster – includes text about Ritscher’s beliefs and a drawing of Ritscher attending an anti-war rally in Chicago. The poster is part of his ongoing Inspired Agitators series of posters which tours in the USA and Canada as an element in a classroom and art gallery event called How Art and Music Can Change the World, co-presented with Jean Smith. Of his poster series, Lester says, “Presenting the ideas and lives of activists and artists this way is a form of social protest.” David Lester is giving away the poster as a pdf.

Public Collectors: Malachi Ritscher will include artifacts from Ritscher’s work as a documentarian focused on recording the Chicago music scene, including a Mecca Normal performance at the Empty Bottle. The live set was recorded by Malachi Ritscher on November 11, 2002 while Mecca Normal was on tour with their album The Family Swan (Kill Rock Stars, 2002). On this occasion, a touring version of How Art and Music Can Change the World was being exhibited upstairs at the Bottle Cap. Malachi visited the art exhibition, which included many of David Lester’s Inspired Agitators posters and Jean Smith’s paintings depicting politically-charged events.

Malachi – the Mecca Normal song about Malachi Ritsher’s intentions and his death – was released as a 7″ record in 2010 by Olympia, Washington’s K Records. An acoustic version of the song and a video by Jean Smith were released on November 3, 2013, the seventh anniversary of Malachi Ritscher’s death.

During July and August of 2014, Public Collectors: Malachi Ritscher will be exhibited at the Experimental Sound Studio in Chicago.

Mecca Normal – NEW ALBUM out in September, 2014 on M’lady’s Records – produced and mixed by KRAMER. http://meccanormal2014.wordpress.com

ARTIST BIOS: Jean Smith and David Lester formed the electric guitar and voice duo Mecca Normal in the early 1980s with the express intention of changing the world. The band has released thirteen albums (K Records, Matador, Kill Rock Stars). Together, Lester and Smith run a small press, a record label and a political art museum.

David Lester is the author of The Listener graphic novel (Arbeiter Ring, 2011) – the story of Hitler’s rise to power correlates to questions about the power of political art. David Lester lives in Vancouver, Canada.

Jean Smith is the author of two published novels and a two-time recipient of Canada Council for the Arts awards as a writer of creative fiction. Her paintings have been included in two Black Dot Museum of Political Art exhibitions in Olympia, Washington, in 2010 and 2012. Jean Smith lives in Vancouver, Canada.