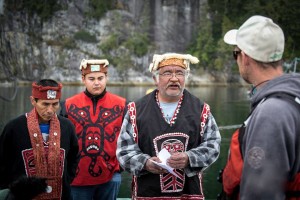 “Who decided that wild salmon would go the way of the buffalo?” – Alexandra Morton

It is not yet illegal to protect our planet, says Alexandra Morton.

As an independent biologist, Morton, one of B.C.’s most vital authors, has accepted support from Paul Watson’s Sea Shepherd Conservation Society for Operation Virus Hunter and recently witnessed an eviction notice proferred by a West Coast First Nation to a Japanese/Norwegian consortium.

The joint venture with Sea Shepherd has been envisioned to track farm salmon viruses and audit the salmon farms along Canada’s biggest wild salmon migration route. Investigative voyages will be undertaken aboard Sea Shepherd’s research vessel the R/V Martin Sheen. In 2015, Alexandra Morton won a Federal Court case that prohibits the transfer of PRV-infected farmed salmon into marine net pens unless the salmon farmers have ministerial permission. Her work will help to show if this legal decision is being followed. She will be joined by First Nations leaders and journalists.

In early August, Morton participated in a gathering at the Big House in Tsaxis (Fort Rupert) when the crew of the Sea Shepherd were dressed in regalia and honoured by Hereditary Chiefs Paul Willie and his sons Charles and Stephan. People and hereditary chiefs joined in dancing with the crew, as a symbol of solidarity.

According to Morton’s research, up to eighty percent of farmed salmon in BC appear to be infected with piscine reovirus (PRV).

“This is a dirty industry,” she says. “It pours all of its waste into the biggest wild salmon migration routes in Canada, one of the last great fisheries left on earth. Who decided that wild salmon would go the way of the buffalo? Who made that decision?

“Everyone knew that bringing Atlantic Salmon into British Columbia was a bad idea. Scientists and the Ministry of Environment and the DFO fought hard, they called it Russian Roulette. We’re playing Russian Roulette with the wild salmon.

“The director-general of DFO science, Pacific Region, Pat Chamut, said we would be guaranteed to get an exotic virus, probably one that we had never even heard, if we kept importing Atlantic salmon. The people who were trying to stop Atlantic salmon from coming into B.C. said ‘Men in suits showed up, and it was decided.’

“I have been studying viruses in farmed and wild salmon for the last five years and 95% of the salmon in supermarkets are infected with the piscine reovirus, which is a virus that is associated with a disease that damages the hearts of salmon. “So, a wild salmon with a damaged heart is a dead salmon. What I see today in the management in the salmon-farming industry is corruption and fraud. For our government, the Canadian Liberal government, granted this industry long-term licenses. That benefits shareholders in Norway and Europe; it doesn’t benefit the people of this coast.

“So, how do we get rid of this industry? How do we move on? You have to be visible to government. You have to stand alongside all of us who are fighting this. We can do this. Governments will change their minds if enough people say no.

“Places on earth that still make clean water, air and food have to be protected. Covenants need to be put on them. Otherwise our children are simply not going to survive. Wild salmon feed the trees, they make the oxygen we breathe. They’ve built cultures, they built the soil of this province.

“We can fix this. It is not yet illegal to protect life on earth.”

The Musgamagw Dzawada’enuxw First Nations are a group of four tribes whose traditional territory in the Broughton Archipelago current contains approximately one-third of the B.C. salmon farming industry despite 29 years of opposition to that industry.  According to Musgamagw Dzawada’enuxw, the salmon farming industry does not have permission to operate in their territory.

According to Morton, last spring up to 40% of the young salmon leaving their territory were killed by sea lice from Cermaq and Marine Harvest salmon farms. Hence the Norwegian/Japanese salmon farming operation was told to vacate their territory.