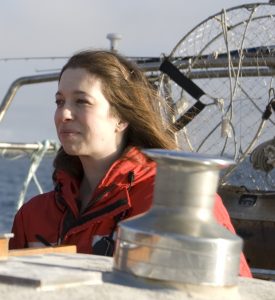 In At Sea with the Marine Birds of the Raincoast, conservation biologist Caroline Fox (at right) crosses thousands of kilometres of open ocean to chart the distribution and long-distance migrations of North Pacific marine birds including albatrosses, puffins, and shearwaters. Fox considers the conservation challenges, past and present, faced by these remarkable pelagic birds, many of which were hunted for food, feathers, or sport.

Reviewer Sean MacPherson points to “our propensity to hunt or harvest unsustainably, the marvellous adaptability and capacity of hunted creatures to survive, and our paradoxical urge to protect them once we have driven them to the brink of destruction.”

At Sea with the Marine Birds is shortlisted for the 2017 Basil Stuart-Stubbs prize for outstanding scholarly book on British Columbia. – Ed.