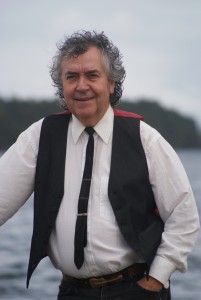 To outsiders, it might appear that the remarkably productive Mother Tongue Press on Salt Spring Island must be a one-person operation, spearheaded by Mona Fertig, but her husband Peter Haase has been an integral partner from way back when.

After learning to play guitar and sing pretty well and, yes, after having bumped into two other musical guys in his hometown who were named George and John, before they became famous, Haase left for Australia at age sixteen with his family in December of 1966 after an exodus of approximately 125,000 from the Everton slums in Liverpool had begun in 1961. Upon reaching Canada in 1971, he lived in Toronto and the Yukon before becoming part of the music scene in Vancouver’s pubs and coffee houses. He met Fertig during the brief but influential era when she initiated and managed her Literary Storefront operation in Gastown. Although his first love, before Mona, was music, Haase has since made his living primarily as an electrician/builder, gardener, scriptual teacher and letterpress printer.

With their two children, the couple moved to Salt Spring Island in 1990. Peter Haase’s memoir, Liverpool Lad: Adventures Growing Up in Post-War Liverpool (Mother Tongue $21.95) recalls his boisterous boyhood and tumultous teen years as the youngest of four brothers in the ’50s and ’60s.

Overcoming violence, poverty and bullying teachers, Haase developed his feisty and humourous personality. We follow his travails and escapades as he apprenticed as a butcher boy, got up to mischief among the “jigger rabbits” in alleyways and dressed like a Mod (British dandy) at the Cavern Club, digging the Mersey Beat. 978-1-896949-­29-­1