Laurenda Daniells in her own write 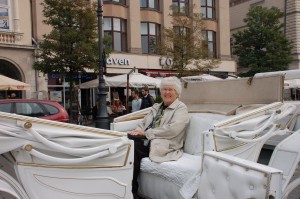 In 1970, Laurenda Daniells became the first University Archivist at UBC. She remains UBC’s University Archivist Emerita. Married to Roy Daniells, head of UBC’s English Department, she raised two daughters during the 1950s and 60s in one of the earliest ‘West Coast Modern’  homes built on the University Endowment Lands at the dawn of the baby boom generation. In 2016, Laurenda Daniells published Royal Blood: A Memoir (Paper Trail $22.95), a collection of short stories that reflect the life of a Canadian woman born in Winnipeg (1923), with ancestors who include the daughter of an Okanagan chief that married fur trader/author Alexander Ross. Their son, James Ross, started a newspaper, became a lawyer and eventually was a Minister of Justice in the Louis Riel government. After marrying Roy Daniells, Laurenda moved to Vancouver. Her stories of starting UBC’s archive range from political — getting administrators, faculty members and librarians on her side — to hair-raising when she had to track down a would-be thief of a tape recorder and tape (of whale songs) that belonged to the archives, which she later found in a hippie house in Kitsilano. 978-0-9949303-0-9