L is for Sarah Leavitt 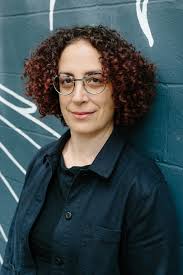 Sarah Leavitt’s second graphic novel, Agnes, Murderess (Freehand $29.95) is based on the folk legend of serial killer Agnes McVee who owned a roadhouse in 108 Mile House during the Cariboo Gold Rush. Inspired by the unverified allegations about this madam, Leavitt imagined a whole new story for her beginning with Agnes’s birth on an isolated island off the coast of Scotland. The power of Agnes’ grandmother, a witch feared by the islanders, grows stronger especially after the early death of Agnes’ mother. She escapes to London then British Columbia but continues to be haunted by her grandmother wherever she goes. There are many twists and turns, including Agnes’ passionate friendships with women in St. John’s Wood in London, England to female relationships in the Cariboo, despite having a husband and child. Leavitt’s inaugural book, Tangles: A story about Alzheimer’s, my mother and me (Freehand 2010) was the first work of graphic literature to be a finalist for the Writers’ Trust Non-Fiction Prize, among other accolades. Tangles went on to be published in the U.S., U.K., Germany, France, and Korea and a feature length animation is in development. Leavitt’s prose and comics have appeared in Geist, The Globe and Mail, Vancouver Review, The Georgia Straight and Xtra West. She has also written short documentaries for Definitely Not the Opera on CBC Radio. Leavitt holds an MFA in Creative Writing from UBC and continues on with the program teaching comics classes.
9781772141429