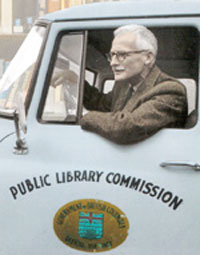 Beloved Peace River librarian Howard Overend has died at age 98 in Mission, having published his memoirs as Book Guy: A Librarian in the Peace (TouchWood 2001). In 2002, he wrote, “Everyone told me there was no way I could sell a book about Peace River libraries; I’m happy to report otherwise. My son and I landed at Grande Prairie, rented a car and went on a tour to visit public libraries to sell the book. It was awesome. I spoke eight times in four days. B.C. BookWorld was the first media outlet to take my book seriously. Then we made the front page of the Alaska Highway News (“Book Guy Returns”). We also had radio and TV interviews at Dawson Creek and Chetwynd, apple strudel at Tomslake, and by Fort St. John, we ran out of books. At Hudson’s Hope, 15 people signed up and paid for books I promised to send later. I got a thrill of happiness meeting men and women I hadn’t seen for some 30 or 40 years since I provided the mobile library service. The Peace River people have changed over the years, but their hearts have not.” 9780920663820