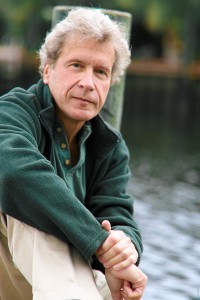 John Perkins’ Salt Spring address was called “Geopolitics, the Future, and YOU — A Call to Action.”

In an interview with the Gulf Islands Driftwood, Perkins expressed his belief that “extreme materialism” arose in the wake of Nobel prize winner Milton Friedman’s maxim that the primary and only responsibility of business was to maximize profits.

“It was a new idea that became the driving force and it really opened the door for abuses of the capitalist system,” Perkins told the Driftwood newspaper.

“We need to change that dream of business, not to maximize profit but to sustain the planet. We really have an opportunity to move into a new dream with a life economy instead of a death economy. Certainly our current form of capitalism is very, very dangerous. We must get rid of it, and I firmly believe it can be done.”

Perkins came to Salt Spring Island at the behest of four health practitioners at the Green Raven Clinic (Seraphina Capranos, Kim Hanson, Petra Hasenfratz and Cal Steele) who had met him at an annual fundraising dinner for the Pachamama Alliance.

Perkins further told the Driftwood that voting within the current political system in the West (ie. Canada and the U.S.) won’t make much difference because big business fuels political campaigns and political decision-making. Boycotting products and business, he suggests, is a better approach to generate change.

“Go to the corporations,” he said. “They are just a bunch of people, and get them to change their goals. We the people can convince them to change … Let Monsanto know first hand that it’s totally unacceptable to exploit farmers and send GMOs through the matrix. Let Nike know that you’re not going to buy from them if they use sweatshop labour. They’ll have to listen or go out of business. We can do that because we have tremendous power.”

Coincidentally the Salt Spring Public Library screened the documentary about him called Apology of an Economic Hitman. In it Perkins outlines how the American empire has used rigged elections, fraudulent economic reports, military coups and murder to obtain and retain its dominance.

Born in Hanover, New Hampshire on January 28, 1945, John Perkins–a controversial economist who has received the John Lennon/Yoko Ono Peace Prize and who fraternizes with the likes of the Dalai Lama and Sting–has described and analyzed how the so-called Third World has been subjected to economic colonization. John Perkins’ New York Times best-selling book Confessions of an Economic Hit Man, which reputedly sold over 1.2 million copies worldwide, recalls how he was hired to induce poor countries to borrow large amounts of money in order to make them economically and politically dependent upon, and subservient to, the West. John Perkins’ Hoodwinked challenges readers to venture away from predatory capitalism and into a more sustainable, just, and peaceful world. He has also written books on shamanism and indigenous cultures.

Perkins has appeared in numerous documentaries and has lectured at more than fify universities. He is a founder and board member of Dream Change and The Pachamama Alliance, nonprofit organizations devoted to establishing a better world.

Here is a partial transcript:

Amy Goodman: Explain this term, “economic hit man,” e.h.m., as you call it.

John Perkins: Basically what we were trained to do and what our job is to do is to build up the American empire. To create situations where as many resources as possible flow into this country, to our corporations, and our government. In fact, we’ve been very successful. We’ve built the largest empire in the history of the world. It’s been done over the last 50 years since World War II with very little military might. It’s only in rare instances like Iraq where the military comes in as a last resort. This empire, unlike any other in the history of the world, has been built primarily through economic manipulation, through cheating, through fraud, through seducing people into our way of life, through the economic hit men. I was very much a part of that.

Goodman: How did you become one? Who did you work for?

Perkins: Well, I was initially recruited while I was in business school back in the late sixties by the National Security Agency [NSA], the nation’s largest and least understood spy organization; but ultimately I worked for private corporations. The first real economic hit man was back in the early 1950s, Kermit Roosevelt, the grandson of Teddy, who overthrew of government of Iran, a democratically elected government. [Prime Minister] Mossadegh’s government–he was Time‘s magazine person of the year. Roosevelt was so successful at doing this without bloodshed–well, there was a little bloodshed, but no military intervention, just millions of dollars spent–and we replaced Mossadegh with the Shah of Iran. At that point, we understood that this idea of economic hit man was an extremely good one. We didn’t have to worry about the threat of war with Russia when we did it this way. The problem with that was that Roosevelt was a CIA agent. He was a government employee. Had he been caught, we would have been in a lot of trouble. It would have been very embarrassing. So, at that point, the decision was made to use organizations like the CIA and the NSA to recruit potential economic hit men like me and then send us to work for private consulting companies, engineering firms, construction companies, so that if we were caught, there would be no connection with the government.

Goodman: Okay. Explain the company you worked for.

Perkins: Well, the [international consulting] company I worked for was a company named Chas. T. Main in Boston, Massachusetts. We were about 2,000 employees, and I became its chief economist. I ended up having fifty people working for me. But my real job was deal-making. It was giving loans to other countries, huge loans, much bigger than they could possibly repay. … So we make this big loan, most of it comes back to the United States, the country is left with the debt plus lots of interest, and they basically become our servants, our slaves. It’s an empire. There’s no two ways about it.

Goodman: How closely did you work with the World Bank?

Perkins: Very, very closely. The World Bank provides most of the money that’s used by economic hit men, along with the [International Monetary Fund]. But when 9/11 struck, I had a change of heart. I knew the story had to be told, because what happened at 9/11 is a direct result of what the economic hit men are doing. And the only way that we’re going to feel secure in this country again and that we’re going to feel good about ourselves is if we use these systems we’ve put into place to create positive change around the world.

John Perkins has recalled his work on Confessions of an Economic Hitman thus: “The book was to be dedicated to the presidents of two countries, men who had been his clients whom I respected and thought of as kindred spirits – Jaime Roldós, president of Ecuador, and Omar Torrijos, president of Panama. Both had just died in fiery crashes. Their deaths were not accidental. They were assassinated because they opposed that fraternity of corporate, government, and banking heads whose goal is global empire. We Economic Hit Men failed to bring Roldós and Torrijos around, and the other type of hit men, the CIA-sanctioned jackals who were always right behind us, stepped in…

“I was persuaded to stop writing that book. I started it four more times during the next twenty years. On each occasion, my decision to begin again was influenced by current world events: the U.S. invasion of Panama in 1980, the first Gulf War, Somalia, and the rise of Osama bin Laden. However, threats or bribes always convinced me to stop.”