Some estimate as many as forty women have gone missing along the Highway of Tears corridor in thirty years. 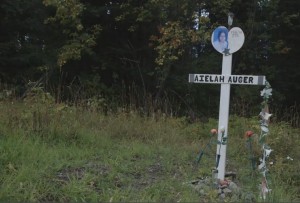 At 14, Aielah Auger died on the Highway of Tears in 2006--Ray Michalko has investigated ever since.

Now private eye Ray Michalko has written a book about it.

Officially, over the last four decades, at least nine young women have been murdered or gone missing along the seven-hundred-kilometer stretch of road between Prince George and Prince Rupert known as the Highway of Tears.

Now ex-RCMP cop turned old school gumshoe private eye Ray Michalko has documented his decade-long efforts to unlock the secrets of these missing women’s lives and those nine unsolved cases for Obstruction of Justice: The Search for Truth on Canada’s Highway of Tears (Red Deer Press 2016). The title is drawn from his own difficulties with the RCMP. He says, “at one point the RCMP sent me a letter suggesting that if I didn’t stop investigating the Ramona Wilson case and a number of others, I would face an obstruction of justice charge.”

Recently Michalko told Frank Peeples of the Prince George Citizen that his spate with the RCMP brass has been smoothed over. “The men and women in the RCMP out on the road I have no problem with,” he said. “In fact, those members and I have a lot of conversations together as part of my work and their work. It was some of the bosses in Vancouver that caused the problems I kept running into.”

There were seven cases of murdered or missing women along the highway when Michalko started his own sleuthing into the tragic conundrum. The RCMP has since added similar cases from Highways 97 and 5, as well as from Northwest Alberta, raising the number of missing women under investigation to eighteen. Some have suggested more than thirty women could be included in the scope of the ongoing inquiry. Thus far, Michalko says he will not participate in a national inquiry into Murdered and Missing women,  saying “I haven’t got a lawyer,  and  you would need one to take part in something like that.” This stance could make him vulnerable to allegations from the public that his book enables him to benefit from the tragic disappearances. Michalko has received some payment for his investigations, but much of the time he has been conducting his own inquiryon his own dime.

“I keep getting tips,” he told her, “and I think as long as I am getting them,  I am obligated to follow them up. My gut feeling though, is  that unless someone knocks on a police officer’s door and says ‘I did it’,  that these cases are probably never going to get solved.” The book was launched at Books & Company in Prince George on August 19th and in Quesnel on August 20th.

Thus far 33 recommendations have arisen from the Highway of Tears Symposium that followed the death of 14-year-old Aielah Saric Auger who was dumped on the side of the highway just west of Prince George in the winter of 2006 but no arrests have been made ten years after her body was found.

The first, self-published thriller by Lin Weich of Quesnel, Strength of an Eagle, was inspired by the disappearances of women along the Highway of Tears and the drug smuggling problems in Northern B.C. A young sea kayaking guide named Maya battles for her freedom after she is discovered in the wilderness by members of a drug cartel who force her to cook and clean in a fish camp, enduring beatings.

Similarly, the social trauma of the missing women from the Highway of Tears is reflected in Adrianne Harun’s debut novel, A Man Came Out of a Door (Penguin 2014).  Adrianne Harun teaches at the Rainier Writing Workshops, an MFA program at Pacific Lutheran University.

Marie Clements’ original, Aboriginal blues/rock multi-media musical The Road Forward was partially conceived to recognize the Native women missing and murdered on the Highway of Tears and Vancouver’s Downtown Eastside.