Hannah and her sisters 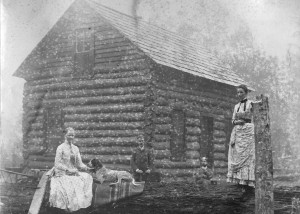 “Men here rarely see ladies at all and would not miss a chance of walking home with a lady.”

The homesteading letters of Hannah Kirby and her brother Murdoch reveal the delights and drudgery of Fraser Valley pioneering at “Mahonia Ranche.”

At the age of 23, try Murdoch Kirby immigrated to British Columbia from England with his friend Charles Sprott. They homesteaded at Glenwood in south Langley at the end of today’s 216th Street near the U.S. border, each on a quarter section – 160 acres of land.

Sisters Hannah and Elizabeth joined Murdoch as soon as he had finished building a log cabin. Elizabeth fell ill and soon returned to England, but Hannah stayed on and continued taking care of her brother’s household.

The record collection of the Langley Centennial Museum in Fort Langley holds about thirty letters written between 1888 and 1895 by Murdoch and Hannah Kirby to their sister Agnes, who lived with their parents in England. Though only a fraction of their correspondence, the surviving letters by Hannah and Murdoch to Agnes provide a unique window on the lives of early settlers brought to the British Columbia after the completion of the transcontinental railroad in 1885.

Murdoch and his friend Charles Sprott had what even they considered a rough start. “We have had a very wet week,” Murdoch wrote in October of 1888. “The rain came through the tent. If it had not been for my Macintosh, my bed would have been wet through.”

The two friends quickly moved into a fixed-up shanty, the door of which had to be moved over the door opening at night until they had a chance to buy hinges.

Building their houses took most of Murdoch and Charles’s time that winter and the following spring. “We are overwhelmed with work. I shall not be able to plant much except potatoes this spring,” writes Murdoch, “rolling logs, sawing, splitting and carrying planks was the order of last week. We had to build two bridges to cross the marsh.”

They first built and finished Murdoch’s house, where in the summer of 1889 Murdoch welcomed his sisters Hannah and Elizabeth. A few weeks later Charlie could move out to his own house. With Charlie they had felt “rather cramped for room.” Not surprising as the house was just 384 square feet.

Murdoch wrote contentedly, “The house is comfortable and the sitting room very pretty.” He added a 300-square-foot lean-to for the kitchen built a shed and a stable. After finishing his house Murdoch turned to clearing his land. In the first year he “chopped” and removed trees from four acres. What he did not use as building material was burned. By the end of three years he had three acres under cultivation, including an orchard with 70 fruit trees. He drained his land with some 30 rods (150 metres) of ditches and surrounded it with 80 rods (400 metres) of picket fence. When needed, neighbours helped each other in these herculean tasks, keeping track of the hours they worked.

With standing water around there were swarms of mosquitoes.  Early on Murdoch writes: “Hannah is in very good form. BC seems to suit her. She dreads the mosquitoes this spring – they are just beginning to make their appearance.” And they did come indeed causing Hannah to write Agnes: “The mosquitoes are biting my feet deadly.”

Her brother had different problems: the endless stones in the ground he cultivated. “Poor old Murdoch,” writes Hannah, “one day he was awfully blue about the stones. He said he would have to go on picking them up if he lived here fifty years. I guess they will require picking for the next 100 years or so. He is all right again today and we have been very busy planting potatoes. I churned, ironed and baked this morning and spent the afternoon cutting and dropping the potatoes in the rows. Murdoch was all day at the potatoes.”

There were heavy chores to be done at home as well: cooking meals and baking cakes and endless quantities of bread for hungry workers and visitors; large loads of laundry; and keeping the house clean from the sand and the mud that was everywhere. And preparing food for winter: “Tuesday I baked and cut up my beetroots. They went nicely into a five-gallon barrel. The vinegar is leaking out just a little but not enough to hurt, I think. I have some red cabbage to pickle and then my storeroom will be complete for this year. I only had 6 lbs. 8 1/2 [oz.] of tomatoes.”

The garden gave Hannah great pleasure. “The flowers I have in bloom in the garden are double yellow narcissus, polyanthus, single white narcissus and dwarf purple irises and red daisies. The polyanthus are in large lots and most gorgeous and rich blaze of colours. …. We intend to get some good roses, I mean regular garden ones, the ones that have no centre to them.” Of course she planted some holly bushes and ivy as well. Before the nearby Glenwood post office opened in 1892, the Kirbys picked up their mail and sent letters at the post office in Blaine, Washington, across the border. Blaine is also where they did their shopping for groceries, hardware, and boots. They walked and rode endless miles over muddy trails to get there and anywhere else, including long rides out to Langley church in summer. Rarely did they visit New Westminster—it was just too complicated to get there.

Many names of people coming and going appear in the letters, but there was a core of neighbours and friends. Prominent among those in their first year was Louis Claude Hill who Murdoch thought was “…  just the man to have for a neighbour.” The sisters agreed “… that Mr. Hill is the nicest of the men out here.” When Hill left at the end of 1889 Hannah writes: “Mr. Hill has been so good to everyone here….”

Louis Claude Hill settled at Deer Lake where he started growing strawberries using Chinese labour and shipping the fruit to New Westminster and Vancouver by tram. He took part in the formation of Burnaby. Charles Sprott, who came out with Murdoch, followed Hill’s example and also moved to Deer Lake. Meanwhile the Kirbys continued in Glenwood without access to cheap labour or easy transportation.

The letters Hannah and Murdoch sent to Agnes in England reveal a lively community working and playing together. They frequently entertained, sharing meals or teas in the English fashion or they gathered at someone’s home for dances.  We often read about card games played in the evenings and on rainy days. Soon after she arrives, Hannah writes: “Men here very rarely see any ladies at all [and they] would not miss a chance of walking home with a lady.” But that is as far as it went.

Hannah never married and neither did Murdoch or Agnes who joined her siblings in 1903. In 1911 they settled together in Whonnock where they lived the rest of their lives as active and much valued members of the community.