From Warsaw to Hamilton 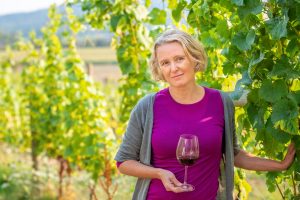 One of the authors set to appear at the 34th annual Jewish Book Festival, February 9-14 at Vancouver’s Jewish Community Centre and other venues is Tilar J. Mazzeo.

If you’ve never heard of her, well, that’s why we’re here.

At the festival she’ll be speaking about the social worker Irene Sendler who smuggled Jewish children out of the Warsaw Ghetto, convincing friends and neighbours to hide them. With the aid of tradesmen and her star-crossed lover, she saved thousands of children, making trips through the city’s sewers, sometimes hiding children in coffins, sneaking them through checkpoints concealed under overcoats. She maintained a secret list of all those children’s identities at immense personal risk. Mazzeo’s book Irena’s Children: A True Story of Courage recently won the 2018 Western Canada Jewish Book Award. 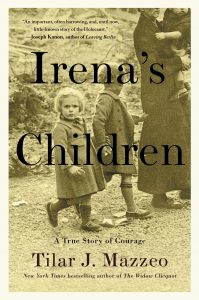 As a cultural historian, she proceeded with three European follow-ups, The Secret of Chanel No. 5: The Biography of a Scent. (2010), Irena’s Children, (2016) — the story of the Polish social worker Irena Sendler – and The Hotel on Place Vendôme (2014), which became another New York Times bestseller in travel writing and was a Los Angeles Times bestseller for more than 20 weeks.

In The Hotel on Place Vendôme she describes intrigues at the Ritz Hotel in Paris during the Nazi occupation. As soon as the Nazis far too easily overtook Paris in 1940, Adolf Hitler ordered the Ritz Hotel to remain in its luxury mode, serving as headquarters for his highest-ranking officers, including Riechsmarshal Herman Goring while simultaneously attracting rich patrons and artists like Coco Chanel, Ingrid Bergman, Ernest Hemingway and Marcel Proust. Celebrities slept with fascists; Wehrmacht officers plotted to assassinate the Fuhrer. It’s a story of opulence and nasty, evil, ambitious people. 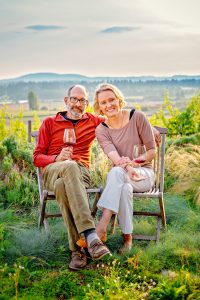 In January of 2014, Mazzeo received her permanent residency papers for Canada. She now lives in Saanichton with her husband, Dr. Robert Miles, a Canadian professor of English, where she is the proprietor and winemaker at Parsell Vineyard on Lamont Road. The public tasting room is less than a year old. Her still and sparkling wines are naturally grown, with no chemical filers, no chemical fining—and sulfite-free upon request.

Mazzeo has since completed a new biography of Eliza Hamilton, the wife of Alexander Hamilton, the subject of the hottest musical on Broadway in 2018. “I am especially interested in writing about secret or hidden histories,” says Mazzeo. “Often, those have been stories about resistance movements in books about people like Irena Sendler, known as the ‘female Oskar Schindler,’ or in my book about the resistance networks in the Hotel Ritz in Paris during the German occupation.

“Other times those secret lives have been stories about amazing women, whose lives have tended to be obscured. That’s the story about Eliza Hamilton, who is known only as the wife of a famous man but who, behind the scenes, kept powerful secrets and saw herself as engaged in deeply political acts of courage.”

Previously, Mazzeo, who grew up in Maine, was the Clara C. Piper Associate Professor of English at Colby College in Maine and held teaching appointments at the University of Wisconsin, Oregon State University, and the University of Washington. She was also the Jenny McKeon Moore Writer in Residence in the Creative Writing and English program at the George Washington University from 2010-2011 and a Washington Scholar at Pembroke College, Cambridge, UK in the late 1990s. 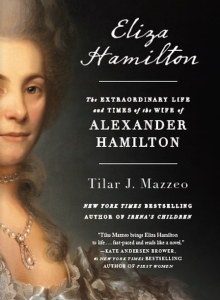 Touted as the first full-length biography of Elizabeth Schuyler Hamilton—the devoted wife of Alexander Hamilton as depicted in Lin-Manuel Miranda’s Broadway musical Hamilton—Mazzeo’s Eliza Hamilton: The Extraordinary Life and Times of the Wife of Alexander Hamilton was just released in September. It tells her subject’s complete life story, from her pioneering girlhood to the aftermath of Alexander’s murder, to her preservation of her husband’s good name in her later years.

In Alexander’s last letter to her before he died, he described her as the “best of wives, best of women.”