From Peachland to Portugal 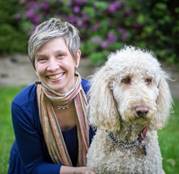 Born in North Vancouver, Michelle Oucharek-Deo of Port Coquitlam is a Registered Art Therapist who has written a debut novel, The Girl in the Peach Tree (Live and Grow Press 2017), about a young woman who grew up in the shadow of her mother’s mental illness. This story of self-awakening and romance follows 25-year-old Maya Wells as she overcomes her upbringing and her constrained emotions. Partially set in Peachland, B.C., we meet a protagonist who has an epiphany on the night before her wedding in the form of a panic attack that enables her to realize she does not love the man she intends to marry. After the wedding is cancelled, she becomes one of eight contest winners for a month-long stay at a vineyard retreat in Portugal–whereupon she meets Cristiano in an airport waiting room. “With a spilt cup of tea and a spark when they touched, a deep connection emerged between two wounded hearts.” The cover art was designed and painted by Wally Oucharek of Melville, Saskatchewan. 978-1-988348-00-1 $12.99