BC Hydro’s proposed dam called Site C will officially cost $8 billion, but probably much more, and will flood about 4,000 hectares of class 1 to 5 agricultural land. 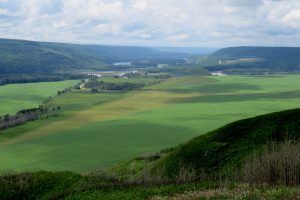 Mark Eliesen, former CEO of BC Hydro, considers the Site C dam a “white elephant” that will mire Hydro so deeply in debt that Hydro might have to be sold.

REVIEW: The Peace in Peril: The Real Cost of the Site C Dam

[Website cover image: A view of the valley between Bear Flat and Halfway River on a misty day in July of 2016. John Gellard photo.]

But BC Hydro has its way, a 60-metre-high wall of compacted earth will stretch more than a kilometre across the main stem of the Peace River–and the garden will be underwater.