Living on an island not served by ferries is not for the faint of heart. Howard Stewart reviews Joy Davis. 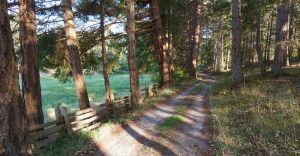 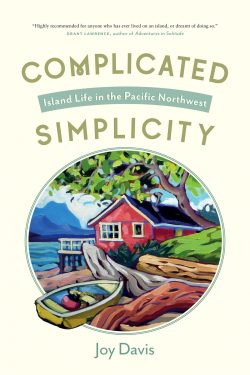 Joy Davis’s book, she writes, “…focuses on the perspectives and experiences of people who live on Pacific Northwest islands, particularly those not served by ferries…” Life on these islands, she tells us by way of introduction, “involves independence, complexity and self-sufficiency.” These harder to reach islands are special places where “ingenuity, creativity, passion, and hard work lie at the heart of making satisfying lives” (p. xi). Having returned to the exurban comforts of Denman Island after a few days on more feral and thoroughly delightful Lasqueti Island, where they have neither electricity nor a real ferry, I had to concede her points. Davis goes on to systematically, charmingly, and anecdotally look at life on our coast’s more isolated islands. In the process, she aims to help readers discern whether they’ve got what it takes to live on one.

Islands, by some definition that stops short of whole continents, are home to about ten percent of the world’s population, Davis says. But she won’t focus on Madagascar or Ireland and instead calls on D. H. Lawrence to confirm that a place has to be quite small before it really feels like an island. My latest visit to Brexit-riven Great Britain suggested otherwise, but this is a red herring. 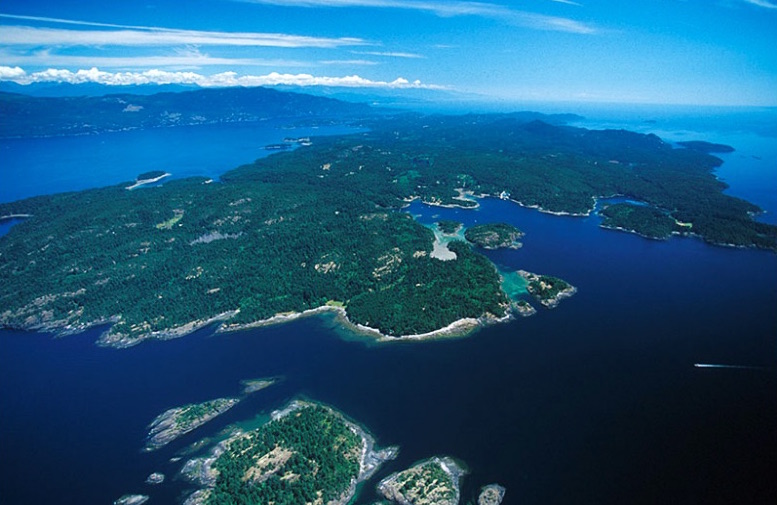 No ferry and off-grid: Lasqueti Island in the Strait of Georgia 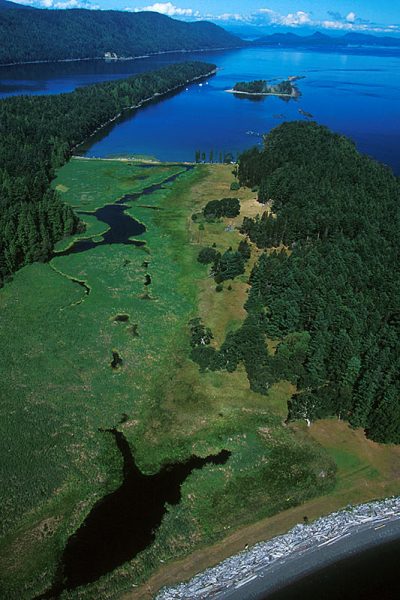 Davis mostly draws from the experience of her own family’s tiny and beloved but challenging three hectare paradise, Bath Island south of Gabriola, and from testimonials she’s gathered from a couple of dozen other isolated islanders, from the San Juans to the Broughton Archipelago.

A broad overview about islands considers what they have meant over time around the world. From The Tempest and Robinson Crusoe to Lord of the Flies and Blue Lagoon, people have been washing up on islands, large and small, for a very long time and for a myriad of reasons. Living on Honshu or Greenland may not qualify you as a “islomaniac” but if, like Davis’s parents in the 1960s, you feel drawn to live on one of the world’s 370,000 islands measuring between 1 and 10 hectares (at high tide?), then you may quality.

If you do, then you’ll need to know what to look for when hunting for your own “perfect island.” B.C.’s complicated coastline alone boasts about 40,000 islands, so it’s important to know how to narrow it down. The author’s advice at times reads like a helpful real estate brochure for island hunters, full of practical advice and cautionary tales about everything from tricky marine currents and winds to land taxes and Islands Trust regulations.

Once you’ve found just the right island for you, you’ll need to find the right boat to get you there and back safely. Or perhaps a little plane, budget permitting. For most people though, it’ll be a boat and that brings with it a whole new set of issues, like knowing how to run the damned thing and keep it running, despite the eternal assault of marine weather, waves and salt that will wear out even the best built vessels, engines and docks. Yes, docks. You could well need one of them too, if you’re planning to inhabit one of these “off-ferry-grid islands.” 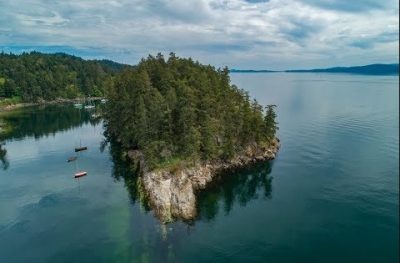 Retreat Island on the west side of Galiano

Once you’ve figured out the boat thing, you’ll need to know what to do (and not to do) and what to expect when you start building your “off ferry grid” dream house. Brace yourself. It won’t be easy, much less cheap. By this stage in the book one can see the inspiration for its elegant title. “Complicated simplicity” indeed.

If you’re still enthusiastic about launching a new off-grid life of freedom and quiet contemplation, after all the sobering fine print about what will be required to get you there and keep you there, warm, dry, and alive, then you’ll probably want to know more about the rhythms of life you can reasonably look forward to on your island. Once again, Davis offers a hard-eyed summary of what it will really look like, and it’s not all skittles and beer. I noted here that she seems to describe eclectic lifestyles of (mostly) well-heeled, seashore dwelling peasants who’ve voluntarily embraced lives of endless toil and challenge. From the daunting task of procuring wood fuel to the quest for local food, from the cringe inducing (for me at least) puzzle of operating a propane fridge, to the scientific art of cooking with wood heat. Why would anyone do it? Well, to start with, for the gorgeous sensuality of a quiet life surrounded by the sea and its creatures in a setting of exquisite beauty.

But one does not live on sunsets alone. What kind of social life might you expect to have on your island? Here, we begin to get a clearer idea of the diversity of experiences involved in living on one of our coast’s thousands of “off-ferry-grid islands.” Once again though, it’s complicated simplicity, a juggling act to find the balance between socialization and solitude that suits each insular person or couple or family; such juggling can be especially challenging for younger people who are there not out of choice but because of their parents’ dream. 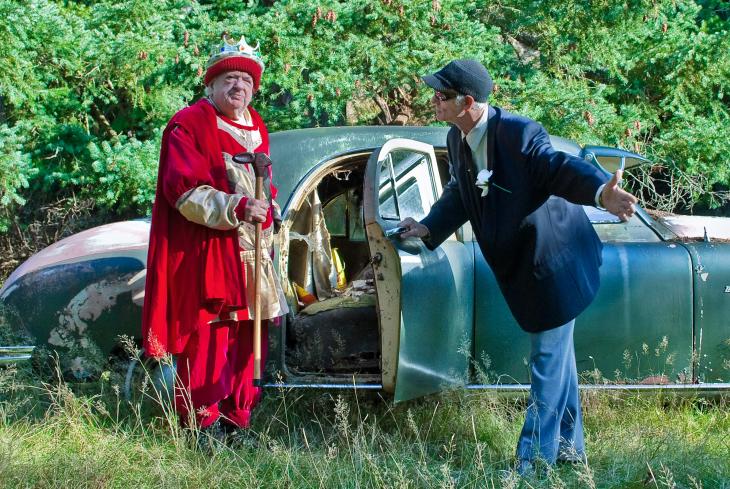 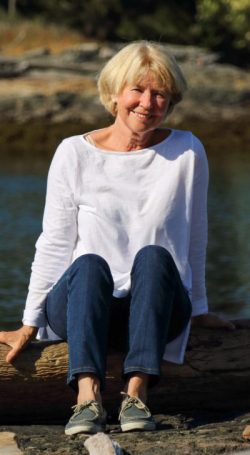 The penultimate chapter offers a few more cautions, a few more disclaimers for those who haven’t yet figured it out. A reminder that living on an isolated island means you can’t just call 911 and wait for the ambulance to show up after you’ve dropped the chainsaw on your foot.

After all this, how to know if you’re suited to life on an off-ferry-grid island? Davis concludes with a helpful profile of the “perfect islander.” S/he is a sort of rustic Übermensch:

Someone who is not easily intimidated … with a great deal of self-sufficiency and confidence … handy … who knows how to fend for themselves … resilient, confident, enthusiastic, tenacious, quick-witted, optimistic, proactive, fit, self-reliant, independent, adaptable, self-disciplined, flexible … [who] will also bring creativity, ingenuity, a strong environmental ethic, a get-up and go attitude … good organizational skills, a ready sense of humour, and engaging social skills … inventiveness and resourcefulness….

Whew. Even before this final chapter, I’d begun suspecting I’d never make it as an “off-ferry-grid islander.” By the end of the chapter, I knew it for sure.

But if you think you might qualify, or if you’re just curious about those who’ve risen to the challenge of living in one of these splendid places, then this is the book for you. 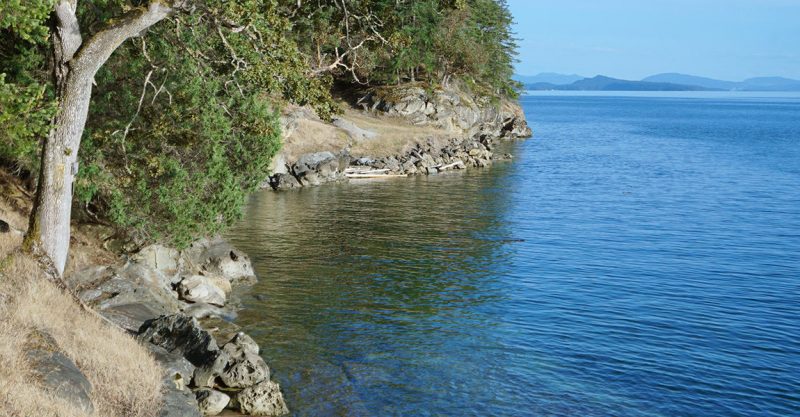 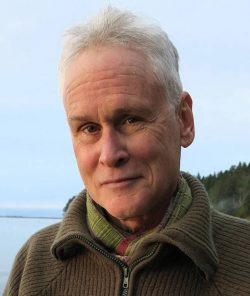 Howard Macdonald Stewart is author of Views of the Salish Sea: One Hundred and Fifty Years of Change around the Strait of Georgia (Harbour Publishing, 2017). He is an historical geographer and semi-retired international consultant whose work has taken him to more than seventy countries since the 1970s. He is currently writing an insider’s view of his four decades on the road, notionally titled Around the World on Someone Else’s Dime: Confessions of an International Worker. He has lived on Denman Island (an island served by ferries) off and on, for more than thirty years.