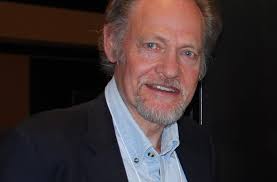 He hasn’t quite got to the Stompin’ Tom or Peter Gzowski level yet, but former publisher and editor extraordinaire Douglas Gibson is working his way towards legendary, cross-country status as a thoroughly Canadian entertainer–even with that Scottish brogue.

He dresses better than Don Cherry and he’s back on the West Coast for another one-man show, “CANADA’S GREATEST STORYTELLERS 1867-2017, sharing his personal memories and praise for some of Canada’s greatest fiction writers.

We’re not sure whether or not he got permission to include the Haida myth-maker Skaay in his “unforgettable Sesquicentennial celebration of our finest storytellers” but that’s apparently where this literary tour begins–with the Haida Gwaii storyteller who has been championed by Robert Bringhurst, who has been credited as the translator for his writing.

Born in the village of Qquuna around 1827, Skaay devoted his life to telling stories after he was crippled by an injury in middle age. Also known as John Sky, he lived most of his adult years in the village of Ttanuu. Both SKAAY and the other formidable Haida storyteller Ghandl belonged to the Eagle side of the Haida, as opposed to the Raven side.

The third volume of Robert Bringhurst’s homage to Haida storytellers and tribal historians, Being in Being: The Collected Works of a Master Haida Mythteller SKAAY of the Qquuna Qiighawaay (2001), is derived from original ethnographic work by linguist John Swanton. Longtime Haida Gwaii scholar and linguist John Enrico has alleged plagiarism with regards to Being in Being.

Okay, so that’s not a story that Gibson is going to tell. But you can be fairly certain there will be some wry shenanigans along the way. Douglas Gibson with one of his protégés.

We are promised bursts of Canadian music, dozens of famous photographs, and scores of iconic paintings by our finest artists, as well as author caricatures by Anthony Jenkins. A much-practiced raconteur, on-stage and off, Gibson will end his show by talking about the only Nobel Prize-winning author he’s ever edited.

And it’s not Bob Dylan.