Jon Bartlett and Rika Ruebsaat will commemorate the 100th anniversay of labour organizer Joe Hill's execution with a concert and a book launch. 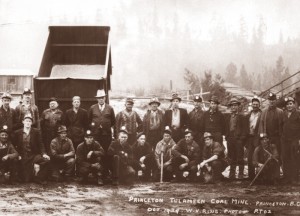 Princeton's Tulameen coal miners went on strike in 1932 in spite of anti-communist hysteria.

WHO: Jon Bartlett and Rika Ruebsaat, co-authors of  Soviet Princeton: Slim Evans and the 1932/33 Miners’ Strike (New Star 2015) with music by the Solidarity Notes Labour Choir and Fraser Union.

As he faced a firing squad a hundred years ago, on 19 November 1915, Joe Hill, the Wobbly song-maker and union activits, proclaimed “Don’t Mourn – organize!” It could serve as a good motto for the NDP party, both nationally and provincially, after two devestating election setbacks. On the same day, at the same venue, the local NDP will be gathering at 3 pm to discuss what they could have done differently to avoid being relegated to third place in the recent election.

Meanwhile, eighty-three years ago, in December of 1932, the coal miners in Princeton, B.C. were following Joe Hill’s advice. With the help of Slim Evans, who went on to lead the On to Ottawa Trek, they went on strike and formed their first union.

A ten percent paycut, in the depths of the Depression, galvanized the miners working Princeton’s three coalmines into unionizing.

Despite anti-communist hysteria, the Ku Klux Klan, burning crosses and police baton charges against women and children, the miners won the strike. A high price was paid. Jon Bartlett and Rika Ruebsaat’s new book, Soviet Princeton: Slim Evans and the 1932/33 Miners’ Strike (New Star $19) has documented that struggle after exstensive research in the archives of their local Princeton Museum. This “Don’t Mourn – Organize!” event will feature recording artists Jon and Rika singing Joe Hill songs, as well as historical songs from the Princeton picket lines, in collaboration with the Solidarity Notes Labour Choir and Fraser Union, a Vancouver trio that specializes in songs of working people. Labour anthems will include “Dump the Bosses Off Your Back” and “The Tramp.”

Copies of Soviet Princeton will be on sale at the event.

Pause, if you will, to consider the value of your local archives. All over B.C. there are repositories of history that are used by researchers and authors such as long-time partners Jon Bartlett and Rika Ruebsaat who are board members of the Princeton & District Museum & Archives.

As well as releasing seven albums by 2015, mostly of traditional Canadian heritage songs, Bartlett and Ruebsaat produced two books pertaining to Princeton and the Similkameen Valley. The first was a collection of vernacular verses from the pages of the local presses. The second is Soviet Princeton, recalling the most turbulent period of the town’s history when aggrieved coal miners brought labour organizer Slim Evans to town to help them protest a 10% pay cut during the Great Depression.

Soon after they arrived to live in Princeton, Bartlett and Ruebsaat mined the local archive for their unprecedented collection, Dead Horse on the Tulameen: Settler Verse from BC’s Similkameen Valley (Canadian Folk Workshop, $25), a thorough follow-up to the pathfinding work of song-collector Phil Thomas. Complete with historical photos, this narrative and verse anthology is a rare reflection of pioneer life in B.C. The songs and poems of the Similkameen were subsequently featured on their CD entitled ‘Now It’s Called Princeton.’ Their new book Soviet Princeton revisits the volatile winter of 1932-34 when coal miners felt they had no other recourse other than to import labour organizer Arthur “Slim” Evans from the Workers Unity League to help them unionize. When miners from two of the three coal mines in the area responded to Evans’ leadership, town fathers predictably denounced “outside agitators” and the “Communist menace.” In fact, the most menacing force was the mounted police who charged into picket lines and some members of the Ku Klux Klan in British Columbia who assaulted and threatened workers, and a gang led by the Preside of the Board of Trade kidnapped Evans, bundling him onto a train out of town.

Evans soon returned. The labour strife was heightened by the federal government’s creation of a Relief Camp north of town that had also attracted organizers from the Canadian Labour Defence League. The local newspaper, The Princeton Star, predictably sided with its advertising base, the business community. Bartlett and Ruebsaat gleaned the gist of the tense standoff between the town’s establishment and the would-be unionists from the local archives that afforded access to the Depression-era issues of The Princeton Star. The strife served to strengthen the resolve of the undeniably heroic Slim Evans who led the On–to–Ottawa Trek of homeless and unemployed Canadians protesting the relief camps and their conditions.

The Princeton District Museum & Archives (PDMA) started from a log cabin in 1958. The town erected the existing building as a Centennial project in 1967 and the organization was incorporated under societies act as Princeton and District Pioneer Museum in 1970. It changed its name to the Princeton and District Museum and Archives Society in 1983. Livery stables and a farm implement shed were added in 1985. Its Joe Pollard Wing was built in 1999 to house 40,000 fossils and minerals.

As well as local pioneer items, the PDMA boasts a First Peoples basket display exhibiting various weaving styles and periods; the aforementioned fossil and mineral collection; a complete Princeton newspaper collection from 1900 through to the present; approximately 10,000 photographs from 1880 to present; more than 200 audiotape recordings (featuring pre-1980 interviews with Princeton pioneers); historic maps and mining reports from 1858 to present; a collection of 83 Notman Studios glass plate photographs (late 1800s–early 1900s); and an 1880s cabin which housed John Fall Allison’s daughter Lily, her husband John Norman and their six children.