Wade Davis praises the complexity of South America's Rio Magdalena region and ponders the dismal fate of the U.S. 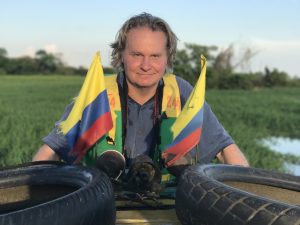 Wade Davis celebrates the Magdalena River in Colombia for its ties to Colombian culture & history.

While Davis bemoans the degradation of American culture as evidenced by the bizarre ascension of a liar and a cheat, Magdalena is his love letter to a country of resplendent revival.

World-renowned as a National Geographic explorer and author, anthropologist Wade Davis of UBC made international headlines in 2020 when he published an article in Rolling Stone titled “How Covid-19 Signals the End of the American Era.”  According to the CBC, that article made nearly 10 million impressions on social media within a week of publication.

Characterizing Donald Trump as a symptom of a great decline, Davis told the B.C.-based Skaana podcast in October, “When you look at Americans who deny the science, who deliberately ignore the advice of the medical authorities, who in masses go to beaches and conventions and bars, they think they’re flaunting their strength in their freedom. They’re actually showing the weakness of a people that lack the stoicism to endure the pandemic or the fortitude to defeat it.”

As someone who specializes in the study of human culture, Davis knows that the types of challenges we are facing are not uncommon or unheard of in humanity’s history. In fact, humans tend to repeat ourselves.

“The fluidity of memory and our capacity to forget is the most haunting trait of our species,” says Davis. “That’s how we’re able to adapt to almost any degree of environmental or even moral degradation.” 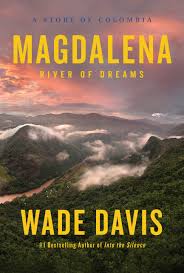 Having released his newest book, Magdalena: River of Dreams (Knopf $39.95) in the spring, Davis felt he had to share his thoughts on America before the US election on November 4th.

“I travel always in pursuit of stories. I’m a storyteller. And, for me, research in the field has always been wondrous, but so too has been research in libraries and archives,” he says. “COVID is not a story of medicine. It’s not a story of morbidity and mortality. It’s a story of culture. America was the land of Walt Whitman and the Grateful Dead. Abraham Lincoln couldn’t tell a lie. Then they had a president who couldn’t recognize the truth.”

Calling Donald Trump “a dark troll of a buffoon,” someone who advocated for malice towards all and charity for none, Davis believes the American people have much work to do if they want to maintain their country’s status and legacy.

“I think mercifully the vast majority of Americans, good and decent people, recognize that Trump has been a disaster for the reputation of America as a global power and as inspiration to the world.”

The self-centred USA can still repair itself to create a positive vision for the future. “I’m always optimistic because I think pessimism is an indulgence and despair is an insult to the imagination, just like orthodoxy is the enemy of invention,” says Davis.

“If Americans don’t find, as Lincoln said ‘the better angels of nature’… if instead they’re not able to find some path of forgiveness to embrace people of other backgrounds, and if they don’t have any sense of a greater common good, a nation to serve and not just with flag-wrap patriotism…If [the American people can’t find their way back to that, then this really will be the end of the American era.”

In contrast, Davis is exultant in his praise for the vibrancy and diversity of Colombia, a formerly terror-ridden country which has been re-born in recent decades, in his historical travelogue, Magdalena: River of Dreams. 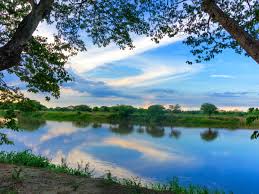 The Magdalena River in Colombia.

Davis illuminates that country’s complex past, present and future while describing his escapades along the country’s main artery, Rio Magdalena. Four out of five Colombians live within its drainage system. Like the Mississippi, it’s a corridor for both commerce and culture.

Two previous journeys enabled Davis to survey its web of connecting waterways; two more trips concentrated on the “Medio Magda­lena” and the musical traditions of the lower river and the Caribbean coastal plain.

A fifth adventure returned him to Arhuaco mamos, visiting “old friends from my time in the Sierra Nevada, as we returned to Bocas de Ceniza to make ritual payments at the mouth of the river, even as the streets of Barranquilla erupted all around us with the magic and joy of Carnaval.” 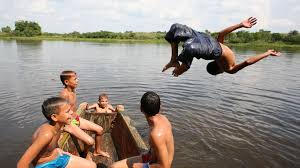 Boys playing on the river.

Although the river is essential for 80 percent of Colombia’s wealth, Davis looks deeper as a cultural anthropologist and concentrates on the river as the well-spring of Colombian music, literature, poetry and prayer.

“In dark times, it has served as the graveyard of the nation, a slurry of the shapeless dead. And yet always, it returns as a river of life. Through all the years of the worst of the violence, the Magdalena never abandoned the people. It always flowed.

“Perhaps, as this book suggests, it may finally be time to give back to the river, allowing the Magdalena to be cleansed of all that has soiled its waters. Colombia as a nation is the gift of the river. The Magdalena is the story of Colombia.”

David cites a short story by Jorge Luis Borges in which a European woman asks a pro­fessor from Bogotá what it means to be Colombian. The man hesi­tates before replying, “I don’t know. It is an act of faith.”

Magdalena is also an act of faith; a kaleidoscopic melding of history and journalism to fuel hope and redemption. The magic realism of Gabriel García Márquez, according to Davis, is a natural representation of the country’s vibrancy and wondrous diversity. 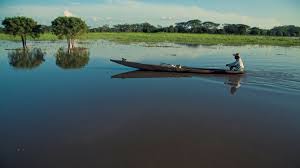 Fishing on the Magdalena River.

“Gabriel García Márquez wrote of what he saw. He was an observer, a practicing journalist for most of his life, who just happened to live in a land where heaven and earth converge on a regular basis to reveal glimpses of the divine.”

Conversely, while Davis bemoans the degradation of American culture as evidenced by the bizarre ascension of a liar and a cheat, Magdalena is his rhapsodic love letter to a country of resplendent revival.

“Only in Colombia can a traveler wash ashore in a coastal desert, follow waterways through wetlands as wide as the sky, ascend narrow tracks through dense tropical forests, and reach in a week Andean valleys as gently verdant as the softest temperate landscapes of the Old World. No place in Colombia is more than a day removed from every natural habitat to be found on earth. Cities as cultured as any in the Americas were for most of their history linked one to another by trails traveled only by mules.

“Over time, the wild and impos­sible geography found its perfect coefficient in the topography of the Colombian spirit: restive, potent, at times placid and calm, in moments tortured and twisted, like a mountain that shakes, crum­bles, and slips to the sea. Magic becomes the antidote to fear and uncertainty. Reality comes into focus through the reassuring lens of the phantasmagoric.”

[Previously, in 2014, Davis was invited to Bogotá by Héctor Rincón and Ana Cano, acclaimed journalists from Medellín, to help promote the Amazon volume of their series Savia Botánica. With the backing of Grupo Argos, one of Colombia’s most prominent corporate citizens, they had assembled teams of botanists, photographers and journalists to survey the five major regions of Colombia with the goal of producing an elegant illustrated book on each — the Llanos, Amazonas, Chocó, the Caribbean coast and the Andean Cordilleras. These Savia Botánica volumes were not to be sold, but gifted as complete sets to every library in the country, all with the goal of sending a message to a new generation of young Colombians that theirs was not a land of violence and drugs, but rather a place of unparalleled natural wealth and beauty, home to, among many wonders, more species of birds than any other country in the world. Five years in the making, Davis’ 20th book, Magdalena: River of Dreams, is an outgrowth of that well-funded series.] 978-0-7352-7892-9