Cancer takes centre stage in a new play about Spirit of the West singer John Mann. 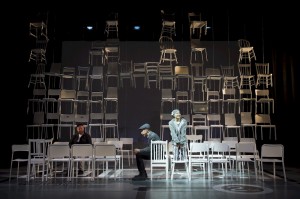 The Waiting Room with text by Talonbooks author Morris Panych is an Arts Club triumph.

The Waiting Room is the best play about colo-rectal cancer you are ever going to see.

As soon as set designer Ken MacDonald’s marvellous panoply of white chairs descended from the heavens and the audience resisted its urge to applaud, everyone was fully on-side on opening night. Not only did we know that Spirit of the West lead singer John Mann has survived cancer and been commissioned to create the show’s less-than-tuneful but urgently poignant songs—performing them with four musicians behind a scrim—many also knew he has been afflicted with a second, deadly disease that requires him to read his own lyrics as he performs.

Now add to this double whallop of pathos the fact that each of us—every soul-searching, death-defying one of us—knows at least one person who has died from cancer… and every one of us knows how it feels like to sit in one of those fatefully descending white chairs in a medical waiting room… and every one of us has already imagined how we might feel if we were diagnosed with cancer…

In The Waiting Room we are being invited to come face-to-face with our own mortality as we laugh at the grim anus and asshole jokes. The indignity of it all. But the physical fluidity of this production itself becomes so mesmerizing that we overcome our initial squeamishness and buy into the commonality of our vulnerable selves.

This play could be ghastly with inept performers. To pull it off, surely Jonathon Young’s brilliant depiction of the cancer sufferer named simply “J” borders on genius. While we strain to make out Mann’s often incomprehensible lyrics during truncated song snippets, the continuous flow of Young’s body and the supporting cast, with choreography credited to Wendy Gorling, becomes the substance of the play as much as the storyline.

Morris Panych not only deserves enormous respect and admiration for adding the flesh of storyline to a skeletal song structure, but he obviously was able to accept a truly collaborative approach. This collaborative spirit makes The Waiting Room feel akin to an exercise in generosity. The Arts Club has afforded John Mann some rare therapy: a public version of his private story.

The continual transitions of the actors from scene to scene, moving props, are an integral part of this public ceremony. It’s a mini Cirque de Soleil in terms of continually distracting our attention, and thereby keeping us riveted. Not wanting to be entirely on the nose, Panych veers beyond strict biography to add a nine-year-old ghost, “C,” who is effervescently depicted by Matreya Scarrwener. Only J can see her or talk to her. She stayed in the same hospital. She never had surgery. She had chemo. She died of leukemia. Now she will be his spirit guide.

C knows J is going to die. All this hospital fussing will be for naught. She keeps telling him the truth while the medical staff assures him he’s going to live. J has a chip on his shoulder when he talks to the well-meaning but officious staff. He grows to trust C instead.

But she’s an apparition, for Chrissakes. So should he listen to his fears and accept C’s perky but dire prophecies? Or should he place his faith in modern science? And should the audience assume that C really does know the outcome? Or is the playwright trying to cleverly bamboozle us?

With Stage One cancer, J can have an operation. With two other lambs being led to the slaughter in hospital gowns, doped and happily delirious in pre-op, the trio lie on their backs, on gurneys, chortling like drunks. “Happy Trails,” says a nurse, wheeling J to knife.

In intensive care, the doctor says to his wife, “Do you know what an ostomy bag is?” We don’t entirely accept that today’s sophisticated and dedicated cancer treatment personnel would not have told the wife in advance, but, hey, this is theatre.

Evidently C’s anus will be on a sabbatical for six weeks. Another hospital staffer advises J.’s wife, convincingly played by Jillian Fargey, “Never mind romance novels. This is where true love comes in.” A few of Mann’s lyrics remind us he’s the guy who has really been there, done that. “And it hurts to get out of bed / and the six-inch drop is what I dread.”

The couple rallies to try and celebrate his birthday at home, resulting in the most unforgettable, disturbing but also entirely plausible scene. J.’s ostomy bag comes loose and spills its slurpy contents onto the rug just as three well-meaning friends drop by with wine to celebrate his birthday.

Here, as the couple tries to mop up the mess with newspapers and their birthday guests squirm, Young’s acting and dancing come to the fore. It’s not just a mawkish scene out of some convoluted sit-com. His manic panic and deep embarrassment is so vividly rendered that we actually believe that is his shit on the living room floor, or dripping down his leg.

John Mann soon cries, “I’ve seen my insides come out of my insides!” It sounds dreadful. But somehow despair is held at bay. As millions of people around the world suffering with cancer do every day…

Seemingly cancer-free, J. goes looking for C.’s home in Maple Ridge and discovers his spiritual guide was real. He has brought flowers for C.’s mother, eager to express his condolences.

Recognizing our possible suspension of belief, Panych has J. ask rhetorically, “How could I possibly know all this?” Indeed. The answer is C’s voice echoing from the Great Beyond. “It’s metaphysical.” Playful and cute, yes. But we are hurtling from grim to goofy.

If there is a shortcoming, it’s the lack of deep investigation for the relationship between “J” and his caregiver spouse. She is accorded the status of a minor character, one step above a nurse. Tossing in a pregnancy seems like an afterthought. What happens between a couple in these life ‘n’ death situations is, arguably, another play altogether, but it’s not given much attention.

By the time John Mann tries to rescue pathos with a concluding acapella number that is too convoluted to raise a tear, we’ve gone slightly off the rails. No matter. When Mann joins his fictional counterpart played by Young for the curtain call, and both men are dressed the same, the union of private and public feels complete.

The climax within the play actually occurs earlier during Mann’s most successful number, Thank You, as J expresses his deep gratitude to all those who have helped him—while he dances and cavorts his way about the stage expressing his joy at being alive. Here Young and the rest of the cast—including the delightfully surly Bonnie Panych in various roles, in league with equally endearing Peter Anderson and Chris Cochrane—evoke an atmosphere of play.

Ultimately The Waiting Room turns out to be modern medicine for a cancer-ridden age, affording a very old fashioned prescription: Life is precious. Make love and hay while the sun shines.