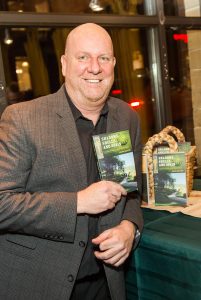 Originally from Vancouver, John Meyer, writes fictional travel memoirs—unique adventure stories that combine fun facts of history with present-day drama and humor—always revolving around a fictitious love story and always based on his own thrilling journeys. Meyer is also the studio writer for Entertainment Tonight Canada and has been ever since the popular daily show launched back in 2005.

Bullets, Butterflies, and Italy (Summer Nomad Publications, 2011) is his travel memoir that combines a love story with an Italian adventure through majestic Rome, captivating Amalfi, and breathtaking Siena during its fervent Palio Festival. 978-0-9876703-0-4

Bulls, Bands, and London (Summer Nomad Publications, 2013) is a fictional travel memoir that combines an unpredictable love story with an adventure through the rock ‘n’ roll wonderland of London and Pamplona during its San Fermin Festival. 978-0-9876703-3-5

Shadows, Shells, and Spain (Summer Nomad Publications, 2017) is a new adventure where an abandoned husband searches for his estranged wife by following the mysterious letters she’s left hidden along the ancient Camino de Santiago trail across northern Spain. 978-0-9876703-6-6