Bring back the tar ‘n’ feathers 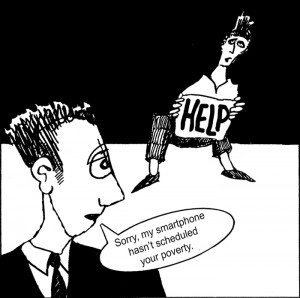 Nobody wants to read about poverty. So let’s ignore this article.

Ever since slave owners in the United States wrote a constitution that declared all men are equal, Americans have been delusionary about themselves. And B.C. is a bit like the U.S. We comfortably and routinely believe in our superiority. This unites us; it makes us strong.

Hey, self-satisfaction is a good thing. For years our license plates boasted Beautiful British Columbia and our previous premier, before he escaped to a safe job in England, confidently boasted B.C. was the best place on the planet.

Now party pooper Andrew MacLeod has come along with A Better Place On Earth: The Search for Fairness in Super Unequal British Columbia (Harbour $22.95) that examines the ugly truth about wealth and poverty in B.C.

We think British Columbians should be free to remain safely inside our blissfully self-satisfied cocoons of ignorance and superior physical fitness. We think everyone should be free to indiscriminately toss around the term world class. The public is advised to be on the lookout for Andrew MacLeod, a naysayer of the worst magnitude.

Writing a bunch of articles about widening inequality in The Tyee is fine. Mr. MacLeod can fritter away his pique all he likes on the internet. But putting his research into an actual book that was initially going to be subtitled Among the Haves and Have Nots in Super Unequal British Columbia, well, that’s going too far. In Hong Kong, surely they would DO SOMETHING to gag Mr. MacLeod.

Didn’t most of our B.C. publishers wisely and quietly stop producing critical books with political content years ago? A Better Place On Earth amounts to a backward step. We believe even poor people in B.C. would much prefer not to know about how badly off they are compared to people in other provinces. We should just continue to accentuate the positives like life expectancy. (If B.C. was a country we would be among the top ten in the world.) Everybody wants to live here, right? That’s all we really need to know.

So who does this Andrew MacLeod person think he is spreading these malicious truths. Every year we are certain the Vancouver Canucks are going to win the Stanley Cup. That’s how we go about our lives here. Delusion is a good thing.  That’s why we are pretty sure you do not want to pick up B.C. BookWorld and learn B.C. is the worst province for inequality in Canada.

Mr. MacLeod has the gall to let us know:

By 2012, the top ten percent in B.C. held 56.2 percent of the wealth, a greater concentration than anywhere else in Canada.

With 13.2 percent of Canada’s population, B.C. is home to 14.6 percent of the people living in poverty.

Between 1981 and 2012, B.C. registered the biggest drop in Canada in the percentage of workers who were members of unions, dropping from 43 percent of the workforce to 30 percent

Real estate in B.C. — particularly in Vancouver — has been identified as the main factor in generating the most severe economic divide between rich and poor in the country.

As if such statistics were not enough effrontery, Mr. MacLeod goes out of his way to tell us that increasingly experts realize that higher rates of inequality will require more prisons and police and will generate higher rates of mental illness, drug abuse and other social problems.

Mr. MacLeod is particularly critical about the cutbacks to welfare rates made by the Liberals since they came to power. We are told the number of children living in poverty in B.C. increased by more than 50,000 from 2010 to 2012.

Such muckraking with facts and figures is thoroughly out of synch with the times. Is it really in the public interest for citizens to know Jim Pattison’s net worth in 2013 has been estimated at more than $7 billion?

Bring back the tar ‘n’ feathers, we say.

One Response to “Bring back the tar ‘n’ feathers”