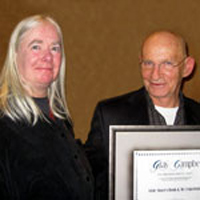 From 1986 to 1996 a humble West End bookstore challenged Canada Customs on the discriminatory censorship its agents exercised when denying the importation of gay and lesbian books and magazines. The owners of the bookstore Little Sister’s were supported by local booksellers and writers, including BC author Jane Rule whose books had been among those denied entry into the country. The following article provides a synopsis of the events chronicled in the book Restricted Entry: Censorship on Trial (1995) by Janine Fuller and Stuart Blackley.

Little Sister’s Book and Art Emporium opened in 1983 as a living room operation on the second floor of a converted house in Vancouver’s West End.

Its three founders – Jim Deva, Bruce Smyth and Barb Thomas – had arrived from the prairies “where listening to the Village People twice in a row on the jukebox could get the shit kicked out of you.”

The name Little Sister’s – intended to be innocuous – was taken from the owners’ cat. When sales of gay and lesbian book titles proved more profitable than popular art exhibits by the likes of Joe Average and Persimmon Blackbridge, Jim Deva and Bruce Smyth invested their savings in books prior to Christmas, 1986.

Christmas never came. In December every imported shipment of books to Little Sister’s was suddenly detained at Canada Customs. Little Sister’s’ owners discovered that according to Tariff Code 9956 and Memorandum D9-1-1, Customs officials had (and have) the power to exercise “prior restraint” of any book, magazine or picture they believe to be obscene.

Equally galling was the discovery that the onus is on the importer to challenge a Customs detention or banning.

Deciding it was too expensive and time-consuming to protest in the courts, Deva and Smith organized a rally at Canada Place to reach Conservative MP Pat Carney, bolstered by a speech by John Dixon, a Capilano College philosophy professor who doubled as the president of the B.C. Civil Liberties Association.

In May of 1987 Little Sister’s and the BCCLA legally challenged Customs’ ruling that two issues of the mainstream gay publication from Los Angeles, The Advocate, were obscene due to two suggestive ads. Other newsstands and bookstores had been importing these supposedly offensive gay materials with impunity. The federal government conceded their “error” with regards to The Advocate one year later, thereby preventing the case from being heard in court.

According to Janine Fuller and Stuart Blackley in Restricted Entry: Censorship on Trial, the victory was bittersweet. Whereas the energies and resources of a small business had been severely depleted, “Canada Customs had emerged unscathed and unrepentant.” In the process, Little Sister’s became notorious.

The first of three bombs thrown into Little Sister’s exploded in an empty stairwell in December of 1987.

A lone customer showed up at Thurlow’s restaurant the following night. The main floor restaurant closed and all but one of the bookstore’s original staff quit – but not the owners. After years of harassment and discrimination, Little Sister’s decided it was time to go on the offensive. It was time to play Village People on the jukebox twice in a row.

On June 7, 1990, Deva, Smyth, Little Sister’s and the BCCLA filed their Statement of Claim in B.C. Supreme Court to challenge state censorship. The trial was set for September 1991.

A third bomb exploded in Little Sister’s stairwell in January of 1992.

The Crown kept postponing the trial. These stalling tactics were costly, frustrating and demoralizing. Two proposed witness for Little Sister’s – their customs broker David Goble and Toronto critic Jay Scott – died of AIDS in the interim.

Little Sister’s lawyer was a heterosexual in his mid-forties, Joseph Arvay, who planned to challenge the Customs Act and the Customs Tariff on the grounds that it contravened the Charters of Rights and Freedom section pertaining to freedom of expression. He was assisted by Irene Faulkner.

To anyone even remotely familiar with this case, it was obvious Canada Customs regulations had been applied in a discriminatory, homophobic fashion. Other bookstores in Canada freely imported some of the same books which were seized at the border if destined for Little Sister’s.

In August of 1994, for instance, the Crown asked Arvay for six copies each of several banned books. When Little Sister’s’ manager Janine Fuller realized it would be impossible to import these titles via Little Sister’s, she approached Celia Duthie of Duthie books to import the books. These previously ‘banned’ books arrived in Canada via Duthie’s customs broker without any problem.

Among numerous acts of stupidity, Canada Customs had detained copies of Jane Rule’s The Young in One Another’s Arms and Contract with the World. Both novels are about ordinary people supporting one another to forge a sense of community. Their graphic sexual content is minimal. The former title has already won the Canadian Authors Association Award for the best novel of 1978.

Anne Cameron’s retelling of a West Coast Indian myth in Dzelarhons was withheld because it involved the mating of a native woman and a bear. Also detained were books by Jean Genet and The Story of O, widely available elsewhere in Canada as a classic about sado-masochism and sexuality.

Videos of the movie version of Jane Rule’s Desert of the Heart were detained enroute to Little Sister’s even though this widely available film had already been shown in mainstream theatres throughout the country.

The more Arvay dug into the case, the more strange evidence mounted. “When The Satanic Verses was briefly detained by Customs in 1989 as possible hate literature, at the instigation of one complaint,” write Fuller and Blackley, “Canada became the only Western nation to give some credence to Rushdie’s persecutors.”

Whereas exporters of gay materials to Little Sister’s were frequently frustrated and confused by Canada Customs policies, Penthouse magazine had invited Canada’s director of Prohibited Importations Directorate, Linda Murphy, to visit Penthouse in New York to personally brief their staff. According to Restricted Entry , “Canadian taxpayers [were] paying to tell big-time pornographers in New York how to peddle their wares.”

The trial commenced in mid-October, 1994. The speakers on behalf of Little Sister’s included Pierre Berton, Nino Ricci and Pat Califia. “The trial came from our sense of self-preservation,” said Jim Deva. “We had no choice other than to fight.”

Since the late 1980s Customs had not applied its D9-1-1 guidelines to magazine advertisements. Apparently the freedom of commercial speech was greater than the freedom of literary speech.

Whereas Bret Easton Ellis’ American Psycho was allowed into Canada with its grotesque descriptions of sexual torture and murder of women, Customs’ officer Corrine Bird testified that she had detained Jane Rule’s Contract with the World in 1993 mainly due to the title. “We were actually more concerned… that it might be hate propaganda,” Bird said.

According to the authors of Restricted Entry, one of the trial’s most compelling statement was made off-the-cuff by Jane Rule when the Galiano Island novelist was asked about the implications of having her work detained at Canada Customs on the grounds that it might be obscene.

“Some cynics have said, ‘Isn’t it nice to get all that attention,’” said Rule. “But in fact, it’s the kind of attention that… would very possibly cut me off from the general audience for whom I write. It is the kind of attention that does not simply last for that week or a month, but labels me for the rest of my professional life… as someone who is probably a pornographer. Because, you know, if they held the books, there must be something in them that they don’t like.

“Now, there are a number of people in Canada who do know that The Young in One Another’s Arms won the Canadian Author’s Association Award for the best novel of 1978. But there are a great many more people in Canada who know The Young in One Another’s Arms was detained by Customs. And that is what I have to carry. I have to carry a reputation created by this charge for which I have no way of defending myself.

“And I bitterly resent the attempt to marginalize, trivialize and even criminalize what I have to say because I happen to be a lesbian. I happen to be a novelist. I happen to have bookstores and publishers who are dedicated to producing my work. The assumption is, therefore, that there must be something pornographic because of my sexual orientation, and I think that is a shocking way to deal with my community.

“Of course we have writers who are writing erotica and so we should. I celebrate that. But we are not a community churning out sex tracts. We are a community speaking with our passion, our humanity in a world that is so homophobic that it sees us as nothing but sexual creatures instead of good Canadian citizens, fine artists, and brave people trying to make Canada a better place for everybody to speak freely and honestly about who we are.”

“It is a joyous day,” declared Little Sister’s manager Janine Fuller. “It means we’ve been understood and validated as Canadians.”

But Justice Smith’s decision doesn’t guarantee that gay and lesbian bookstores will be treated equally in the future. It does not declare that the statute which renders censorship authority to Canada Customs is in itself unconstitutional, as Arvay and Little Sister’s had hoped.

After approximately $250,000 has been spent, Little Sister’s has declared “75% victory” because Justice Smith has upheld Canada Customs’ powers of seizure for the future. Little Sister’s therefore intends to appeal this part of the decision to the B.C. Court of Appeal.

In the interval, before the Court of Appeal can hear the argument, the complainants believe no censorship should be occurring at the border. “Business as usual at Customs,” says BCCLA’s John Dixon, “now means unconstitutional and illegal behaviour.”

During the same week that Justice Smith rendered his verdict, Aerlyn Weissman’s Fiction and Other Truths: A Film about Jane Rule received this year’s Genie award for the best Canadian documentary. It previously received the top prize at the San Francisco Gay & Lesbian Film Festival.

The text of Jane Rule’s testimony has been published as a19-page chapbook, Detained at Customs: Jane Rule testifies at Little Sister’s Trial (Lazara Press, 1995), with proceeds to the Little Sister’s Defence Fund.