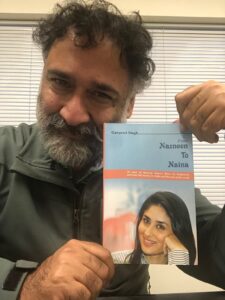 Vancouver-based author, radio host and journalist, Gurpreet Singh has written a book about a Bollywood star and activist, which simultaneously delves into dangerous social trends developing under the growing power of authoritarian governments such as that of India’s Prime Minister Narendra Damodardas Modi: From Nazneen to Naina: 20 years of Kareena Kapoor Khan in Bollywood and what that means for India and the rest of the world (Chetna Parkashan, 2022). Born into a famous Bollywood Hindu family, Kareena Kapoor Khan later married a Muslim man, for which she was hounded by social media trolls. “There is a pattern behind the vilifying campaign against her, which has polarized the Indian entertainment industry,” writes Singh. “The political environment of the country under a right wing Hindu nationalist Bhartiya Janata Party (BJP) regime has also contributed to this.” Singh is a broadcaster with Spice Radio in Burnaby and writes for the Georgia Straight. He is also the director of Radical Desi, an online magazine that covers alternate politics. Singh has published four previous books, including the 2012 title, Fighting Hatred With Love: Voices of Air India victims’ families. 9789391530433