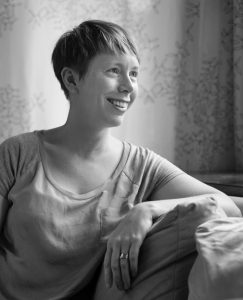 In Elizabeth Ross’ poetic primer for new mothers, After Birth (Palimpset $18.95), the messy moments and distasteful discoveries she writes about include “not having the water birth you planned” and coming to terms with a daughter’s Cinderella obsession. Plus, there’s the unanticipated burden of caring for a parent or perhaps developing “an unhealthy fixation with Realtor.ca.” Piercingly apt, wry and a tad disturbing, Ross’ second book “taps into the contradictions of creation—joy, distress, lassitude.”

Her first book of poetry, Kingdom (Palimpsest Press 2015), takes a confessional approach in which she asks questions and argues with the answers. In the poem Prayer, Ross asks for all things a ‘good girl’ should aspire to: “Raise me to cook a healthy diet. To write thank you letters. To set and unset the table. Carry things. Fetch things….” She continues her wish list to include avoiding boyfriends with long hair, to learn how to teach herself and how to respect others, but ends with the cryptical, “Teach me how to tell a lie.”

Born and raised in Victoria, Elizabeth Ross completed a BA with majors in English and creative writing at Vancouver Island University, followed by an MFA in creative writing at UBC. She has been a poetry editor of PRISM International and her work has been published in various literary magazines and anthologies including Best Canadian Poetry (Tightrope Books 2013). She now lives in Hamilton, Ontario.