ASD brother, where art thou?

Darren Groth has been nominated for a Governor General's Award for his engaging and heartfelt Are You Seeing Me? (Orca $19.95), about how a family copes with a teenager born with Autism Spectrum Disorder (ASD). 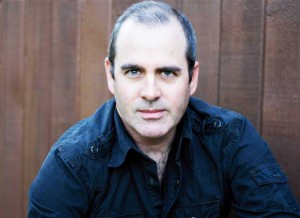 Darren Groth says disability is too often portrayed in fiction as ‘other’ rather than ‘another.’

The winner will be announced on October 28.

Originally from Brisbane, Darren Groth moved to Vancouver in 2007 with his Canadian wife and their then five-year-old twins. A former special-education teacher, Groth promotes awareness and understanding of autism spectrum disorder (ASD) and is the father of a son with ASD. The main characters of Are You Seeing Me? are the twins, Justine and Perry, on a road trip in the Pacific Northwest. Justine has always been responsible for her brother who has ASD. But that is about to change as Perry has been accepted into an assisted-living residence. Before the two are separated, they take an adventure together. Here is a review that was first published earlier this year in B.C. BookWorld. “What is it about sea monsters?” nineteen-year-old Justine Richter asks her twin brother. “Why are you into them so much?”

The twins are in the Okanagan, about to fulfill one of Perry’s dreams—on the lookout for Ogopogo.

Any reader who has been paying attention will realize that high functioning, autistic Perry is describing himself.

As a child born with Autism Spectrum Disorder (ASD), unlike his sister, Perry is subject to ‘inappropriate behaviours’ and he has problems mixing with people.

To further complicate matters, for over a year, since their father’s death, Justine has been his sole caregiver. Their mother left them when they were four.

That’s the set-up for Darren Groth’s engaging and heartfelt Are You Seeing Me? (Orca $19.95).

Thanks to their father’s life insurance policy, the twins have made their first plane trip from their Australian home to meet up with their mother, now living in Vancouver. The mother and her other daughter have nervously awaited the visit. Perry is unaware of the tension. He mostly wants to see Ogopogo.

Perry is also passionate about Jackie Chan movies and earthquakes. He is rarely without his earthquake monitoring equipment: a portable seismograph, notebook, and seismometer that come out whenever he feels uneasy.

Perry is uneasy often. Like when they’re going through Canada Customs. Justine has learned how to cope with her brother’s volatility. But she is not dealing so well with a very new problem: Perry says he wants to leave her and go into the independent specialized housing.

Their father had started researching a care facility for Perry before his death. Justine is perplexed: Is her brother doing this for himself? or for her?

The only hint that this enjoyable and engaging novel is written for young adults comes towards to the end. Plot rules, plausibility not so much. While ‘Saint’ Justine is sometimes too good to be true, her twin brother is an intriguing, wise, and ultimately lovable character.

“He was a joy to write,” says Groth, “much easier than his ‘normal’ sister. There’s a certain fictional freedom that comes with exploring the mind of a unique person. I wanted to produce an authentic voice for the story and be honest to the characters and their circumstances.”

Groth says the original manuscript took about a year to write. Most of the research he had to do was not about Autism Spectrum Disorder but about earthquakes, Ogopogo and Jackie Chan.

“Following the publication of my previous novel, Kindling,” he says, “I started playing with the ideas that would become Are You Seeing Me? It all hung around in my head for a couple of months before I started to put words on the page.”

A former special education teacher and the father of a son with ASD, Groth had previously taught several children with ASD. “It was a real life-shaping experience,” he says, “and, as Fate would have it, quite a useful preparation for being a parent.”

Groth’s own twins are now 14. On his website Groth smiles with his son as they both hold up a sign that reads: “We need DiverseBooks because disability is too often portrayed in fiction as ‘other’ rather than ‘another.’ ”

In an interview with BCBW, Groth articulated the underlying message of Are You Seeing Me?

“Don’t subscribe to the whole ‘perception is reality’ myth. For people like my son and Perry, the distance between assumption and truth can be huge, so avoid snap judgments and instant opinions. If you can do that—if you can pause, wait, pay attention—you might notice a reason or hear an explanation. And you’ll be a better person for it, guaranteed.”

Are You Seeing Me? has also been published by Random House Australia.

Are You Seeing Me?