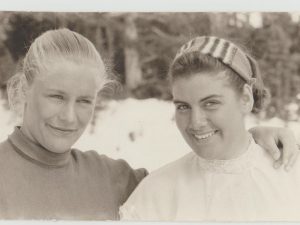 Renate Belcyzk and Sigrid Hirte’s advice for a successful trip: be positive, keep an open heart and take a chance.

As young girls growing up in Germany during WWII, Renata Belcyzk and her childhood friend Sigrid Hirte began dreaming about far off lands.

After the war in 1946, they began to plan more fervently about foreign cities such as Rome and Istanbul, Paris and Moscow, “or even such faraway places as Calcutta, Kathmandu or Hong Kong,” says Belcyzk, knowing that such locales were practically out of their reach.

“Very little traveling was done by anyone in those difficult years,” admits Belcyzk. “Yet we were obsessed with seeing the world.”

The two did follow their dreams even at a time when it was unusual for young women to travel on their own. Now Renate Belcyzk describes their adventures in Our Trip Around the World by Renate Belczyk (RMB $22).

Belcyzk and Hirte started out relatively close to home by taking a cycling trip to Italy in 1948, spending their summer holiday on “ancient, prewar, one-gear bicycles” that they rode all the way from Frankfurt to Naples and back. 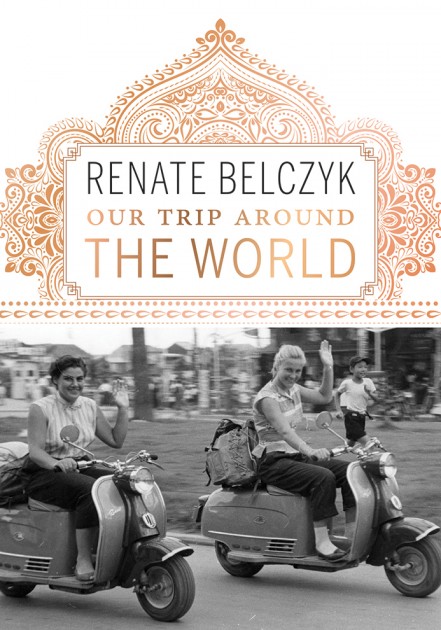 “Very few cars were on the road then and we had a wonderful time.”

In 1950, they listened to a speech by the German writer Heinrich Böll who urged his audience to travel to new countries and make friends. To do so, he argued, would help prevent another war. Belcyzk and Hirte made a pact that day to do as much traveling as they could and worked to get visas and passports. That summer they went to Switzerland, Italy and Austria cycling everywhere, pitching their tent in farmers’ fields and talking to people who frequently invited them home for meals.

“Often we had flat tires on our bikes and other problems, but somehow everything got solved.”

In 1951, they went to England, hiring themselves out as nannies.  Improving English was as much on their minds as seeing England, Scotland and Ireland.

Always, the two had longer term and more challenging goals. Preparations included learning French and other languages. This led them to France in the spring of 1953 with new three-gear bicycles, “the latest in bike technology,” says Belcyzk. “For eight months we bicycled all over the country and enjoyed the land and the people. Whenever we ran out of money, we worked: four weeks as chambermaids in a Paris hotel, another four weeks in Southern France during the wine harvest.”

Part of their pay working in French vineyards was a bottle of wine per day.

From France, the two spent the rest of the year cycling through Spain and Portugal. Africa was next on their ambitious adventure itinerary but they had to kibosh this part of the plan when Sigrid Hirte’s mother fell ill and beckoned her home.

Back in Germany they kept reading adventure and travel books, and made plans to visit a new continent – North America – starting off in Mexico in 1955. This was to be the start of a three-year trip around the world taking the two young women to Canada, Japan, India, Nepal, Egypt, Turkey, Greece and the Balkans.

Mexico was a good place to begin their three-year trip as Hirte had relatives in Mexico City and there were plenty of jobs where they could both work. Taking weekend trips as often as possible, they visited beach towns and small villages where handmade crafts were still very much in production. They also joined a mountaineering club and climbed several mountains, sometimes rather dangerous climbs. The two rode on buses to many parts of Mexico and even across the border to Guatemala from where they had a difficult time getting back into Mexico because they didn’t know to bribe the border guards.

But they loved Mexico and even contemplated staying permanently. Belcyzk had received a marriage proposal, which she kindly declined.

“We had to make up our minds whether to settle in Mexico (very tempting) or move on and see more of the world,” Belcyzk says. “We decided on the latter and applied for visas to the United States and Canada.”

News that four of their mountaineering colleagues had died while climbing Mount Victoria in the Rocky Mountains inspired them to head to Canada to place a memorial on the mount where their Mexican friends had perished. Also, Hirte wasn’t able to get an American visa. Mishaps such as this as well as fortunate circumstances were to influence where Belcysk and Hirte traveled in the following two years.

Their first stop was in Windsor, Ontario from where they departed for Montreal and cycling along the St. Lawrence River. Sometimes they hitchhiked, a common traveling method throughout the 50’s, 60’s and 70’s.

“The people who gave us rides were all very friendly and almost all of them invited us for either a piece of pie or a hamburger,” says Belcyzk. “I remember wondering, ‘Is there anything else to eat in this country?'”

They eventually hitchhiked to B.C. and hiked Mount Victoria to fulfill the memorial duties to their Mexican climbing friends. They also met Hans Moser, at the time a mountaineering guide, but later founder of Canadian Mountain Holidays and widely credited with inventing heli-skiing, now a lucrative tourism sector.

They returned to Montreal to work and save for plans to return to B.C. in the spring of 1957. Hans Moser directed them to Little Yoho campground in Yoho National Park where they hiked and skied to a mountain cabin (Stanley Mitchell Hut) that Moser was staying at with some guests he was guiding. Belcyzk and Hirte spent six weeks in this backcountry skiing idyll.

Their next destination was Alaska but here they were stopped and prevented from going further because they didn’t have the right visas. This is part of adventure travel and undeterred they turned tail and caught a ride to Vancouver. 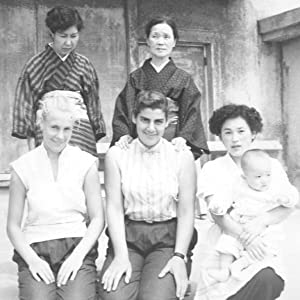 Belcyzk and Hirte in Japan.

After a few days, by chance they met some Japanese sailors in Vancouver Harbour. This chance meeting set them off on a detour to Japan where they rode bicycles around the main Islands of the country.

They soon become celebrities in the local media and were eventually offered motor scooters to aid them on their way.

The highlight of the book is perhaps Belcyzk and Hirte’s drive across India on their scooters, visiting remote Nepal en route. Camping wild and living simply, they took what looks today like big risks. But at that time young female travelers, particularly European, would have been regarded largely with curiosity and amusement and would have had more security.

Belcyzk and Hirte were lucky to have the opportunity to experience the world before globalization began homogenizing diverse cultures. And they were lucky to do so without misadventure for it certainly was a dangerous undertaking at times. They wandered the Valley of the Kings in Egypt, largely on their own, and drove their motor scooters through Turkey, across Macedonia and through the Balkans back to Germany. Everywhere they went they were welcomed with kindness and helped by the locals.

Belcyzk and Hirte are still the best of friends today and visit often, sometimes in person and sometimes by telephone. They have both lived rich and interesting lives and acquired the wisdom that comes with age.

Belcyzk’s story was written for her grandchildren but it is also a gift to us. Her advice: be positive, keep an open heart, and take a chance and explore the world.

Belczyk would return to B.C. to marry and raise a family. Hirte stayed in Germany but the two have remained lifelong friends. 9781771603775

An edited version of this story will appear in BC BookWorld.