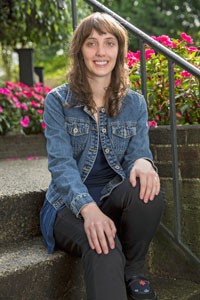 Born in Yellowknife and raised mainly in Vernon, Jenny Story was diagnosed with autism but blessed with a mother who was determined her daughter would succeed in life beyond the home. In high school Jenny wrote and illustrated a fantasy novel that has been hybrid-published, Dysnomia, Outcasts on a Distance Moon (Influence 2015). She has also attended Vancouver Film School and become a 2D and 3D animator.

Her chief motivator and mother, Janet Walmsley, who doubles as her press agent, is now happily claiming her daughter is a “Best Selling Author.” Walmsley has simultaneously paid to publish her own memoir, The Autistic Author and Animator: A mother’s view of a daughter’s triumph (Influence 2015), described by Walmsley as a heartfelt, feel good story.

“I was told when she was a little girl,” says Walmsley, “that I shouldn’t expect too much and she would not be up where her peers are and she would never work in a bank, never get married, never do well in Math and so on.

“I remember walking out of the room and saying that is not going to happen. And it didn’t… Jenny is a role model and living proof that Autism is not a Death Sentence but a Richly Deserved Life Sentence…

“In a world where there is a lot of negative, and with Autism on the rise, I feel sharing this journey brings a ray of sunshine, it enlightens and opens up to everyone what an autistic individual and their family go through, the ups and downs, the highs and lows and how Jenny got to where she is today.”

Mother and daughter are now doing the media circuit and have been asked to be Keynote Speakers at the upcoming ANAC World of Autism Festival in Vancouver from September 27 to October 7. The Opening Ceremony for the festival will occur on October 1 at the Performance Works Theatre, Granville Island, Vancouver, followed by workshops, culminating in an Academy Awards-styled gala event for and about Autistic individuals on October 4 at the same venue. The mother and daughter duo are also participating in the production of a video for the Autism Society of BC.