Mazie Baker questioned how the leadership of the Squamish Nation was handling $32 million per year. 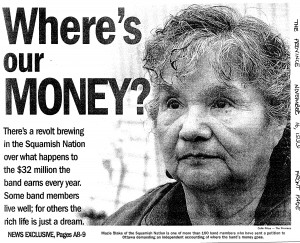 Mazie Baker overcame illiteracy to stand up for families, making headlines in 1999.

Known to her family as ch’esken (Golden Eagle), Mazie made great bannock and raised hell in response to injustice, as revealed in a new book by Kay Johnston.

In 2003 Kay Johnston co-wrote Spirit of Powwow with Gloria Nahanee who had attended St. Paul’s Indian Day School in the 1950s where the nuns had taught her Scottish, Irish, Ukrainian, Dutch, Spanish and square dances.

It wasn’t until Nahanee’s own daughter began to naturally dance at age six that she began to explore the dancing of her own culture. She knew her Squamish Nation had had held powwows in the 1940s and 1950s, sometimes lasting ten days, but she had never participated.

“I just remember I ran away,” Nahanee recalled. “I thought I had to dance. The regalia and the noise scared me at first. I remember the stage where our ancestors, Uncle Dominic Charlie and August Jack, did the Squamish songs and dances…”

Those powwows disappeared for 30 years until Nahanee co-founded the Squamish Nation Dancers in 1987 and organized the first revival of the Squamish powwow in 1988. It evolved into a three-day event that attracted 200 dancers and an audience of up to 4,000.

Johnston later moved to Salmon Arm and became President of the Shuswap Association of Writers and Festival Chair for the 2016 Word on the Lake Writers’ Festival.

With a M.A. in Counselling Psychology and a UVic English degree, she has now released a biography of another stout-hearted, Squamish Nation mother, The Amazing Mazie Baker: The Squamish Nation’s Warrior Elder (Caitlin $24.95). Gloria Nahanee is her daughter. At age six, in 1937, Mazie Baker was taken away by police and forced to also attend the St. Paul’s Indian Residential School operated by Order of the Oblates of Mary Immaculate from 1899 to 1958. Situated on Keith Road in North Vancouver (where St. Thomas Aquinas School now stands), it was torn down in 1959.

At St. Paul’s, Mazie endured months of beatings, malnourishment and lice infestations before Mazie’s family retrieved her from the Catholic school and fled with her siblings across the border. Following WW II, the family returned to the Capilano Reserve. Mazie worked for eleven years packing salmon in a cannery. She married Alvie Baker and raised nine children.

Gradually, like her daughter, Mazie Baker reconnected with her Squamish identity and began to speak out against corrupt leadership in her community. She fought for the rights of indigenous women who were denied status and property rights, advocating for families in need.

“I was taking photos to illustrate the book when I wandered over to the longhouse on the Capilano Reserve where food was being sold,” Johnston recalls. “Finally it was my turn and I had a piece of fresh, warm bannock in my hand. It had definitely been worth the wait. When I caught up with Gloria later and told her the bannock was wonderful, she smiled and said, ‘My mom makes it. Go over to her house and get a picture of her making it for the book.’ “I arrived to find this tiny woman in her kitchen looking like a ghost: her clothes, hands, face and hair were all dusted with flour. She was surrounded by frying pans, mixing bowls, bags of flour, boxes and piles of fresh bannock, and the place was humming as she and two helpers ran an assembly line with a driver waiting for all the boxes to be filled to make the next “bannock run” to the powwow. To my amazement thousands of pieces of bannock were made in that tiny kitchen over the three days of the powwow.

“I learned that Mazie was well-known on the Mission Reserve in North Vancouver for making political waves while fighting for better communication between chiefs and band councillors and band members, whom she always referred to as “her people.” Some of these battles were very bitter, and she had won many—though not all.

“When her husband died in 1993, the bottom had fallen out of her world, but his death became the catalyst for a life-changing decision: she would plunge more deeply into politics, especially Native women’s rights. She set out to learn the language of politics, sharpened her focus and began spending her days planning strategies, talking to groups and committees, and familiarizing herself with all kinds of government documents, a difficult task for someone who could not read.

“She was joined in her crusades by her niece, Wendy Lundberg Lockhart, and together they became a formidable team. When they began their fight for Native women’s rights, they worked more or less on their own, but as they became aware that there were other women, just like them, across the country fighting the same fight, they began travelling to speak at political meetings and other gatherings, and gradually became recognized as women of power.

“Soon the Squamish Nation’s governance and land policies became fuel for major political confrontations, and there were long drawn-out battles at both the band and federal level. Ultimately, with massive support from the people, they orchestrated the defeat of their chiefs and councillors’ plans for self-government, causing ripples of shock across the country.

“As I got to know Mazie, I discovered she had a great sense of humour, was highly opinionated and knew no fear when fighting for what she believed to be fair for her people and her family. The more I discovered about her accomplishments the more I asked myself how she had managed to achieve so much? I became passionate about her story and knew it needed to be told.

“In June 2007 I asked if she would be interested in working with me to write her story. She was surprised, but I couldn’t tell if she liked the idea or not. Finally she said, ‘Well, I’ll think about it, okay?’

“A few days later she phoned to ask me to drop by. She wanted to talk to me about ‘this book.’ I was nervous as we sat chatting about everything but the book until she shifted in her chair. She picked up a photo of herself on the steps of the Houses of Parliament. I waited.

“‘Every time I look at this photo of me, Mazie Baker,’ she said, ‘who can’t read or write, standing on the steps of the Houses of Parliament in Ottawa, just before I’m going to speak to a Senate Committee on behalf of my people, I shake my head and wonder how on earth did all this happen?’

“‘I look back now at the path I traveled to get there and realize it was really long and tough on me and my family. I had to learn so much and fight so often for the same things over and over. I know deep inside that I was somehow prepared for this by my mom and dad from the time when I was just a little kid. They were both proud and strong and they brought us up to be proud too. They were very strict with us though. I was the youngest and a handful—so I’ve been told.’

“Mazie eased around in her chair, lifted her bottle of water, and laughed. ‘I never imagined I would be asked if I was willing to have my life’s story written down. Who would want to read about all the fights I had with the band council to get fair treatment for our people? Would anyone be interested in how my kids helped revive the old ways even though their mother never knew nothing about the language or the culture?

“‘But if other women could know that someone like me could stand up and fight, it might even help them to stand up for what they believe in or what they want. So I’ve decided it would be good thing for me to do. But this is my story, my memories as I remember them, right or wrong.’ Over the next five years Kay Johnston and Mazie Baker became close friends. Mazie used a small tape recorder for her memories. They worked at her dining table, surrounded by the dozens of family photos and memorabilia that covered the walls and sat on every shelf. They were often interrupted by people dropping in to chat, to ask for advice or help, at which they would have to hit the pause mechanism.

“Mazie was a joy to work with,” says Johnston, “always eloquent, with a sizzling sense of humour and scathing opinions. She worked hard on her ‘homework’ and was totally fascinated and involved in her book. Her sharp mind and memory could pull up information from documents, her family history and tell stories that would have me almost rolling on the floor with laughter, sometimes it was hard to transcribe parts of the tapes because of the laughter.”

Mazie’s family called her ch’esken: Golden Eagle. Mazie Baker took her last flight on April 19, 2011. “I was proud to be called her ‘sister,’” says Johnston, “and named as an honorary pall bearer at her funeral.”

Caitlin Press has also released Not My Fate: The Story of a Nisga’a Survivor (24.95) in which Janet Romain recounts the life story of her friend, Josephine (Jo) Caplin who overcame maternal abandonment, alcoholism and epileptic seizures. After she was removed as a third grader from the care of her father, brother and uncle due to alcoholism in the family, she endured foster homes without any family contact until age fourteen. Burdened by symptoms of fetal alcohol syndrome and abuse by sadistic men, Caplin was nonetheless determined to decide her own fate and not be a victim. Not My Fate: The Story of A Nisga’a Survivor records her arduous and triumphant creation of a private life of peace and forgiveness.