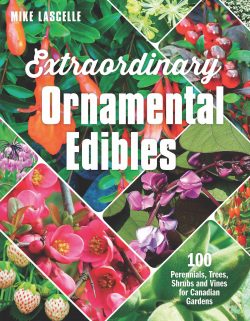 This is quite the book — or guide, as the publishers like to refer to it. The author, Mike Lascelle, is currently a nursery manager at Amsterdam Greenhouses and Garden Centre in Maple Ridge. In this book, he channels his inner Euell Gibbons, that hard-scrabble dustbowl hobo who started out a Communist and ended up a Quaker, whose now classic Stalking The Wild Asparagus (David McKay, 1962) made him a literary hero and outlier of the back-to-the-land movement of the late sixties.

Lascelle, though, isn’t looking for wild plants per se but rather landscape and garden cultivars with an edible upside. He scours the trees and bushes of his lower Fraser Valley zone — not to mention his own garden — sifting for the low hanging fruit of the obvious as well as the offbeat varieties. He demonstrates the nutritional potential of the suburban landscape and, like Mark Diacono in A Taste of the Unexpected (Quadrille Publishing, 2010), Lascelle takes readers on a journey they’ll not soon forget. 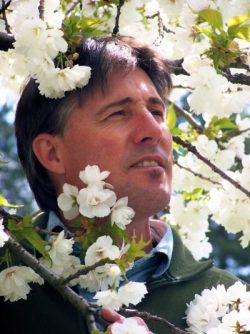 Extraordinary Ornamental Edibles is an ambitious book borne out of the many articles written by Lascelle for the Maple Ridge News. In May 2016, he announced in his column that he had a book deal and asked his readers to supply photos and info on everything that was both ornamental and edible. He had considerable support and has succeeded nicely in this venture. The book is literally jam-packed with colour pictures — the cover of which seems to have come, unfortunately, out of an old Fuji film vat.

But don’t get the wrong idea. A great strength of this book lies in the plethora of images deftly collaged into a glorious visual feast.

Lascelle explains his story and genesis as a plant freak as a kid who was raised in Canadian Army barracks and sought refuge in the woods and meadows surrounding the army’s humdrum housing facilities.

He has now realized an ambitious project with a specific west coast Canadian locus. In this Lascelle has succeeded admirably. I especially liked his discussion of “world crops” (pp. 252-53) in which his cosmic spirit shines through: 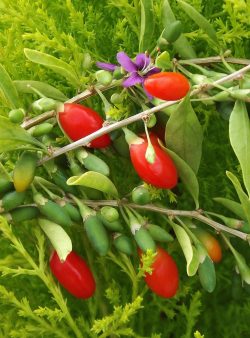 One of the best parts of living in a multicultural society is being exposed to foods and spices from around the world. And now, since we are happily appropriating their use, I consider them just as Canadian as maple syrup, and an essential part of the next generation of local cuisine.

While some call it food fusion, I believe this is the natural evolution of the Western diet, which one can only hope will become more environmentally friendly as these choices become more readily available at local farms and in our own home gardens.

Lascelle gets into an interesting section on “Identifying Microclimates” (p. 233), and tells the tale of the Macedonian horticulturist, George Petkov, whose lower mainland venture provides a fine example of world crops and food fusion. The young Petkov identified a location in the Abbotsford countryside where he believed a commercial kiwi farm could be established — on a southeastern slope with fertile yet well-drained soil. Petkov’s kiwi fruit orchard is currently producing 150,000 pounds of kiwis every season from an 8-acre farm. The “experts” who pooh-poohed the idea knew nothing about that almost mystical element called a “microclimate,” while Petkov saw the fertile bench lands of Mt. Lehman as a perfect site, with protection from cold mountain air being a key element of success. Lascelle details the key ingredients that contribute to the overall microclimate “playbook” of any site. 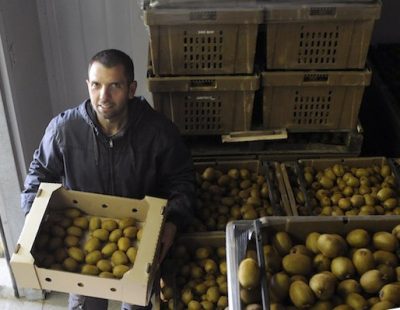 George Petkov and part of his kiwi crop at Abbotsford, 2013. Alina Kokevski photo, BC Local News

I found especially worthwhile Lascelle’s tips for selecting, growing, and harvesting bamboo. He identifies one of them by its Latin name, Phyllostachys dulcis (冬笋 Dōngsǔn), as one of the most prized bamboo for cooking — especially the type harvested in late winter or early spring. The presence of prussic acid means that peeling the outer skins will be required along with some soaking overnight, then draining the bamboo prior to a quick blanching in a steamer. Once you’ve done that, make sure to keep the pointed stems whole and sluice them under the tap before putting them in an airtight glass container with fresh water, and then pop them in the fridge.

My experience has been that for productivity and taste, Phyllostachys nigra “Giant Grey” is the best bamboo, but it only beats its genetic twin “Henon” in a photo finish. Given the incredible food value of bamboo shoots and the relative ease of production, this is an ornamental food that should be much more widely grown. There are so many species and selections that, to get definitive results, one would need to test all of the possibilities over a five to ten year period. Some people are doing just that. According to the people at Shweeash Bamboo, located on coastal Oregon between Seaside and Astoria, “‘Henon’ has similar characters to Black Bamboo, and is thought to be the original species from which Black, ‘Megurochiuku,’ ‘Bory,’ and many other variations of P. nigra diverged.” 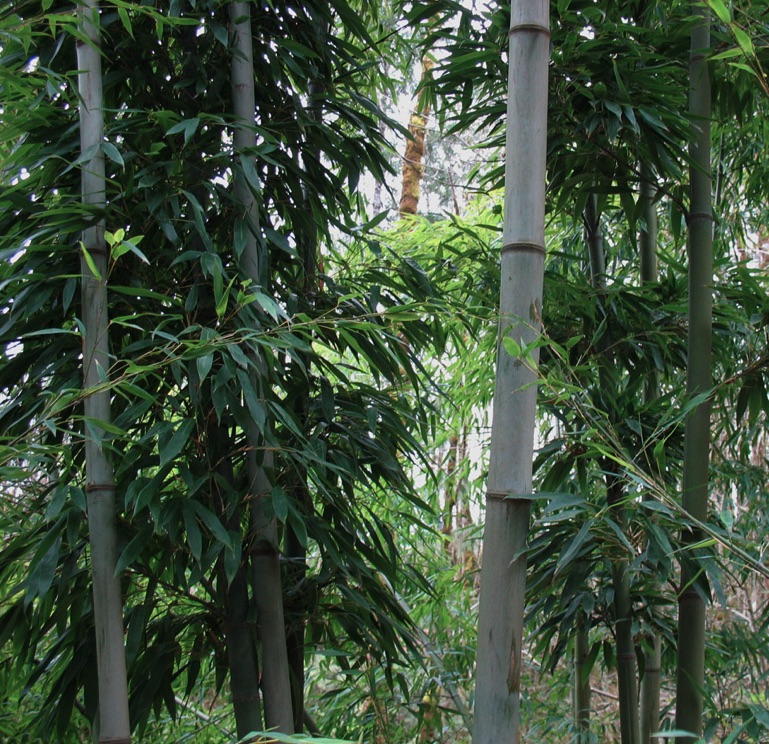 A view at Shweeash Bamboo, a bamboo nursery on the Oregon coast. Photo courtesy Sheeash Bamboo 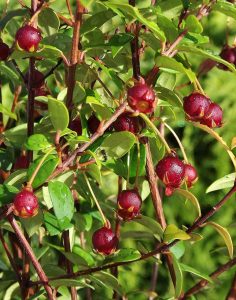 Chilean guava. “The deep red berries,” Lascelle notes, “resemble a tiny pomegranate but have a decidedly strawberry-kiwi flavour to them.” Photo by Mike Lascelle

Lascelle also makes much of the Chilean guava (Ugni molinae), a woody evergreen not unlike the Mediterranean myrtle in appearance. If you live in the Mediterranean zone of the coast — especially the east coast of Vancouver Island — you’ll have little trouble growing it in the open ground. However, if not, take note that it is a tad tender so it’s probably best grown in an oak half barrel or large glazed urn in one’s patio. It can be moved by dolly into the shelter of a hoop house, shed, or conservatory for the winter. The effort is worth it as its fruit is productive, precocious, and very flavourful. Lascelle notes Chilean guava have become a commercial crop marketed as Tazziberry in the milder antipode countries of New Zealand and Australia. The variegated cultivar “Flambeau” is said to be slightly hardier than the species.

While Extraordinary Ornamental Edibles is a very good compendium, the editorial decision to include apples, apricots, blueberries, cane fruit, pears, etc., all of which are essentially old hat, might have watered down the exciting vision and focus of the new boys and girls on the block. More room could have been given over to the newbies. However, in the name of freshness and health, I do understand why they included these established cultivars that exhibit a special fondness for our west coast climate(s). 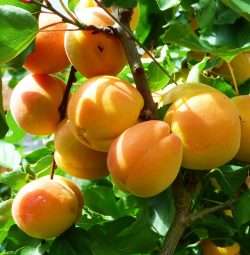 My final quibble is that there is no e-book. One with links and a sources list would have been delightful and an appropriate response to the tremendous number of high quality photos and the superb, hands-on info that Lascelle has provided. After all, what better way to get traction in this kind of edible landscape than by naming names and giving links for the mail order or pick up nurseries? Despite the seductive, digital quicksand of “Add To Cart,” I think this would have been a boon to sales.

All in all, Extraordinary Ornamental Edibles is just a great effort from Lascelle and everyone involved. Lascelle succeeds in expanding our horticultural as well as culinary consciousness. In the process, he teaches us quietly to develop our ecological consciousness — and this is a very good thing. 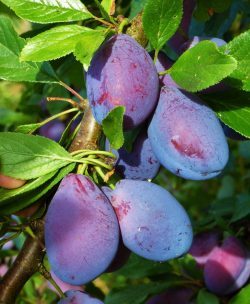 Speaking of pertinent lists, here is a small one of local (south coast of B.C.) nurseries, which I provide in the interests of promoting the cause of ornamental edibles. Please note, however, that good nurseries are too numerous to mention; and in the interest of disclosure, I can assert that I do not know any of these people nor have I ever bought anything from them.

Here is the link for Tree Eater Nursery on Denman Island. It is the brainchild of the multi-talented Magdalene Joly. Their website indicates that they “maintain a mixed orchard (of over 160 varieties of fruits/nuts/berries) and its duck and goose associates, managing an edibles nursery, on-site saw-milling and building farm infrastructure, and various other things like making herbal medicine and creating delicious seasonal farm-based foods.” Joly is particularly impressed with Eleagnus umbellata (Autumn Olive and the cvs. “Superhero,” “Garnet Amber,” “Ruby,” and a seedling selection of hers.) They also have Chilean Guava in 2-Gallon pots for $42. 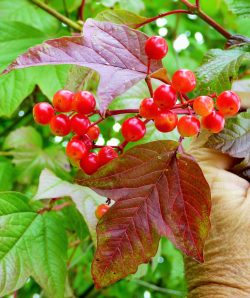 Piroche Plants in Pitt Meadows has been at the forefront of Chinese flora for at least twenty years and they show no signs of letting up. Here’s their most current availability list for the public. Among the goodies they offer is the Tea Camelia (“Blushing Maiden”) that Lascelle touts along with wonderful detail regarding preparation for making your own green tea. They have 3-gallon plants — and plenty of them at present. Finally, at Piroche they have some Michelia yunnanensis, which is an absolutely killer ornamental.

Victoria Bamboo, on West Saanich Road near Victoria, has a good selection of bamboo including the good edible, Phyllostachys dulcis.

Bamboo Botanicals in Vancouver provide an excellent site worth poring over. They are well connected to the UBC Botanical Garden and have many rare ornamental cultivars worth seeking in addition to the dual purpose types (food/beauty).

And I will end my list with a 24 hour time lapse video of a culm emerging from the ground. “Thar’s food in them thar culms!” https://www.youtube.com/watch?time_continue=49&v=t9SQCQOUSuE 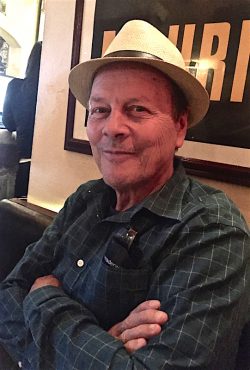 Grahame Ware is a writer and reviewer living on Gabriola Island. 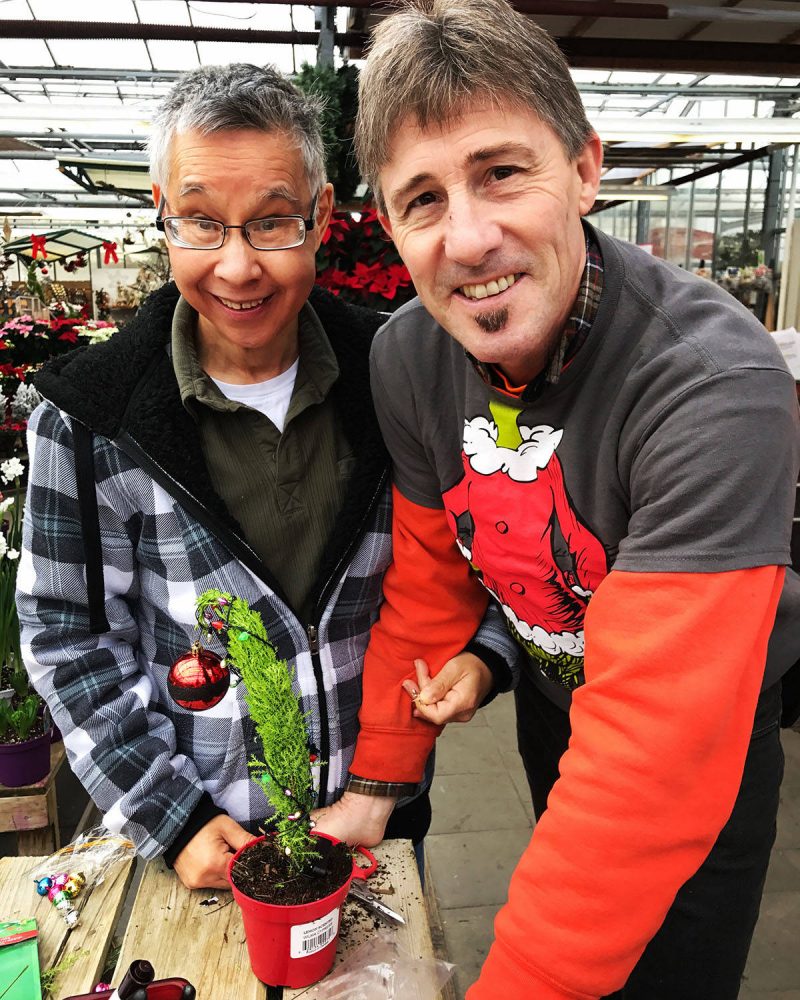