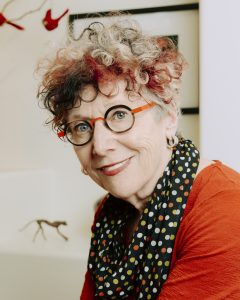 In June, Lorna Crozier will become the 25th recipient of the George Woodcock Lifetime Achievement for an outstanding literary career in British Columbia.

The public is invited to attend her induction ceremony and hear her speak on June 28, 7 pm., at 350 West Georgia.

The award is sponsored by Writers Trust of Canada, Yosef Wosk and Vancouver Public Library. A permanent marble plaque will be added to VPL’s Woodcock Walk of Fame.

Lorna Crozier has already received most of the major literary prizes for which she has been eligible. These include a Hubert Evans Non-Fiction Prize (in 2010) for Small Beneath the Sky: A Prairie Memoir as well as the Dorothy Livesay Poetry Poetry Prize (in 2000) for What the Living Won’t Let Go (M&S). She later received the Lieutenant Governor’s Award for Literary Excellence (2013) to go along with two Pat Lowther Awards, a Governor General’s Award and a Canadian Authors Association Award.

Born in Swift Current, Saskatchewan in 1948, Lorna Crozier overcome family poverty and family alcoholism—as described in her collection of narratives and prose poems, Small Beneath the Sky: A Prairie Memoir (Greystone)—to be inducted into the Royal Society of Canada in 2009. For more than four decades Crozier has made herself known across the country and played a significant role in the mentoring of younger writers, co-editing the anthology Breathing Fire (Harbour) with her partner Patrick Lane. After meeting Lane in the 1970s and co-publishing No Longer Two People and Humans and Other Beasts, she ceased using her married name Lorna Uher and reverted to her family name Crozier.

A former high school English teacher, Crozier attended the University of Saskatchewan (BA, 1969) and University of Alberta (MA, 1980). In 1991, she and Patrick Lane moved to Victoria so she could accept a teaching post at the University of Victoria’s Creative Writing Department, where they taught for many years until their recent retirements. She has credited Sinclair Ross’ novel As For Me And My House as the major stimulant for her courage to pursue her own writing, later acknowledging that influence with the publication of A Saving Grace: The Collected Poems of Mrs. Bentley (1996), set in Sinclair Ross’ fictional town of Horizon in the 1930s.

After venturing into children’s books with Lots of Kisses (Orca), Crozier recently produced an unlikely bestseller that mixed poetry and photography to heighten environmental awareness, The Wild in You: Voices from the Forest and the Sea (Greystone), with photography by Ian McAllister.